RRR Out May 20 on Zee5, BookMyShow Stream in Telugu, Hindi, Tamil, Malayalam, and Kannada 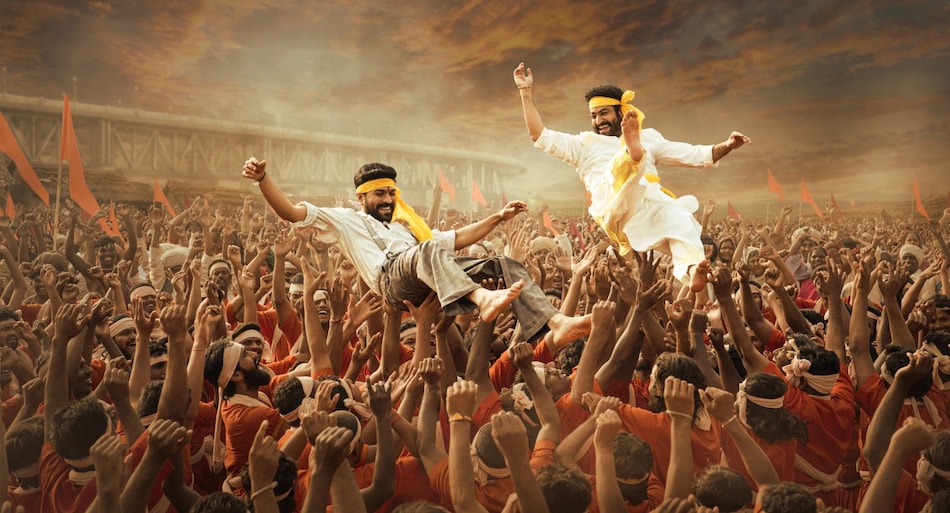 RRR is releasing on May 20 on Zee5 and BookMyShow Stream, but will enjoy a 13-day exclusivity window over the other on languages. Sort of. S.S. Rajamouli's epic period drama — the third-highest grossing Indian movie ever, after Rajamouli's own period drama Baahubali 2: The Conclusion, and the Aamir Khan-led sports drama Dangal — will be available in Hindi, Telugu, Tamil, Malayalam, and Kannada in 4K. But not all versions will launch on both platforms. RRR's Hindi-language dub launches May 20 on BookMyShow Stream, while the original Telugu-language version launches May 20 on Zee5 alongside Tamil, Malayalam, and Kannada dubs. On June 2, RRR will be available in all five languages on BookMyShow Stream. Zee5 won't get RRR (Hindi).

“After a stupendous theatrical success, crossing a whopping 13 million tickets sold on BookMyShow for the film, we are absolutely thrilled to announce that RRR (Hindi) will make an exclusive appearance on BookMyShow Stream on May 20th for fans that missed it in the theatres or those keen on a second watch, right from the comfort of their homes," BookMyShow cinemas COO Ashish Saksena said in a prepared statement. "The excitement around and interest for the film continue to peak with the initial few hours of the pre-booking already off to a momentous start. This is a testament to the sheer grandeur, iconic characters, creative effect, and immersive storyline of the movie which has opened the doors for pan-India cross cultural adoption.

"With movies like RRR and Gangubai Kathiwadi making their way to BookMyShow Stream, we are confident that more large-scale, leading Indian studios and producers will warm up to the [transactional video-on-demand, or TVOD] model and utilise this category to the economic potential that it is capable of generating. It is only a matter of time before TVOD finds itself to be sitting amongst the compelling forms of cinema consumption post a theatrical run for films in India.”

Directed by Rajamouli off a script by his father KV Vijayendra Prasad, RRR revolves around the fictional friendship between Jr NTR's tribal leader Bheem and Ram Charan's revolutionary Alluri Sitarama Raju. It is Jr NTR's fourth film with Rajamouli after the 2001 actioner Student No 1, the action-thriller Simhadri, and the fantasy movie Yamadonga. Charan, on the other hand, had previously teamed up with the filmmaker for the 2009 reincarnation saga Magadheera. The RRR cast includes Ajay Devgn as Rama Raju's father Venkata Raju, Alia Bhatt as Rama Raju's cousin and fiancé Sita, Shriya Sisaran as Rama Raju's mother Sarojini, and Ray Stevenson as the antagonist Governor Scott Buxton.