Jeremy Clarkson, Richard Hammond, and James May are back to their usual shenanigans in the icy wilderness of Europe. 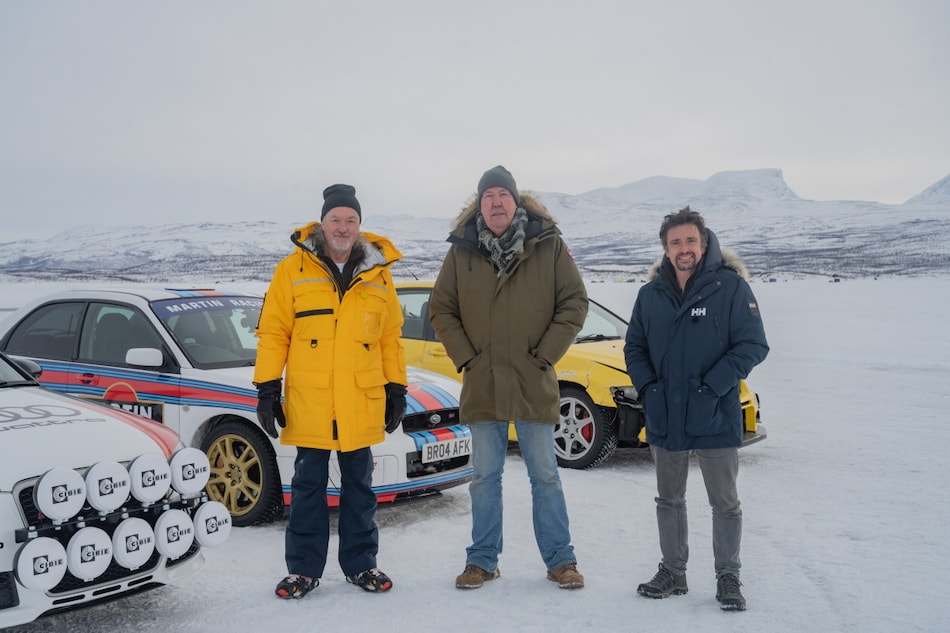 James May, Jeremy Clarkson, and Richard Hammond in a still from The Grand Tour Presents: A Scandi Flick

The Grand Tour Presents: A Scandi Flick just got its first official trailer, ahead of its premiere on September 16. On Thursday, Amazon Prime Video dropped the trailer, showcasing some bits from the latest edition of its muscle car-focused series. The iconic trio — Jeremy Clarkson, Richard Hammond, and James May — are back to journey across the frozen lands of Norway, as they engage in a ton of snowy fun and rally car racing. The feature-length special, “A Scandi Flick”, gets its name from the real-life driving technique involving oversteer and weight shifts.

After trying their hand with bomb defusals and propeller-powered cars in “Carnage A Trois,” the trio will now experiment racing on frozen lakes, while creating chaos in Norway. “We are here to drive across Europe's last great wilderness,” host and star Clarkson reads from his phone in The Grand Tour Presents: A Scandi Flick trailer. It then cuts to clips of the trio dragging skiers across the field, while being attached to their race cars. “One of them [skiers] has only got one leg,” Clarkson notes in amazement. The Grand Tour was limited to Scotland, England, and Wales during lockdowns — the trio live in the UK — owing to COVID-19 restrictions.

While Hammond and May have brought high-speed rally cars such as the Subaru Impreza STi and Mitsubishi Evolution VIII for the special, Clarkson will be driving a safer Audi. As for the reason, he jokingly remarks that it's just because he is now “older.” With The Grand Tour: A Scandi Flick, fans can expect to see a range of pranks and stunts, starting with May dragging an entire bus stop, to high-velocity racing in neon-lit tunnels. “Oh, my God! The Lights aren't coming on,” Clarkson yells as the bulbs inside the dark walls struggle to keep up with his ride's pace.

When filming with vehicles in such low temperatures and with frequent blizzards, engines are bound to shut down and eventually cause the entire shell to freeze over. To counteract this, The Grand Tour hosts try setting the car on fire, before cutting to submarine bases from the Cold War, and a bunch of thrilling crashes as they try tugging a wooden shed through the wilderness. The end of The Grand Tour Presents: A Scandi Flick trailer shows the trio exiting from a makeshift, dome-shaped house, which is revealed to be a museum exhibit. The hosts presumably took shelter there the entire night, waking up to find unsuspecting tourists circling the area. “I haven't gotten any trousers on,” Hammond says in an embarrassed tone.

The Grand Tour Presents: A Scandi Flick releases on September 16, exclusively on Amazon Prime Video. Previously in season 4 — which began in 2019, turning the series into feature-length specials only — the trio have been to Vietnam, Réunion, Madagascar, and across the UK.