House of the Dragon Episode 9 Review: The King Is Dead, Long Live the King

Spoilers ahead for House of the Dragon episode 9. 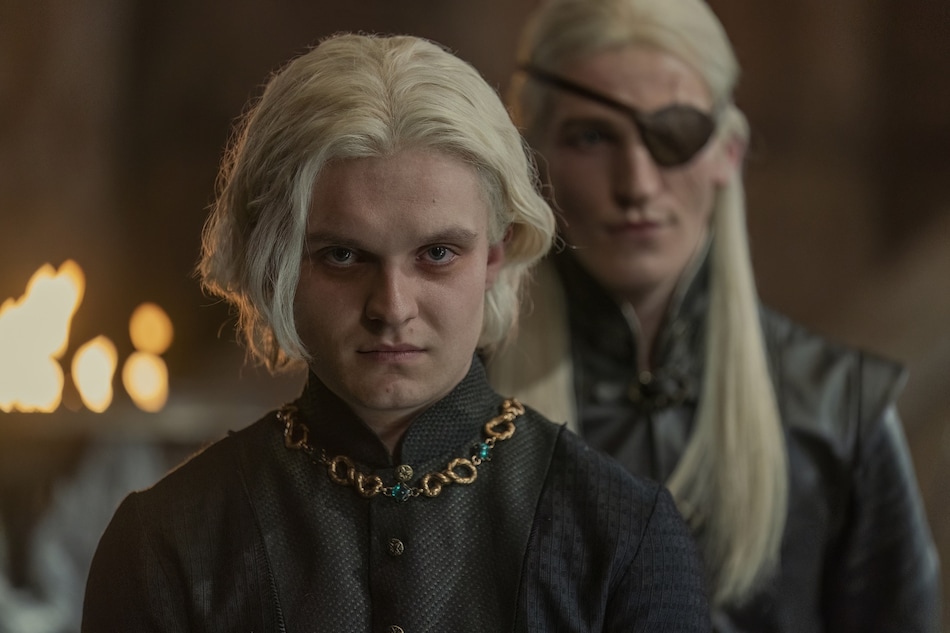 House of the Dragon episode 9 — out now on HBO Max and Disney+ Hotstar — isn't the traditional penultimate episode that Game of Thrones had gotten us used to. There are no big set-pieces here (with that dragon at the end more a sign of things to come). And this new episode doesn't wrap up any long-running storylines (which, on Game of Thrones, opened up the finale to set the table for the next season). In fact, it's an extremely contained episode. Set during the two days immediately following the death of King Viserys Targaryen (Paddy Considine), House of the Dragon episode 9 finds the Queen and her father — Alicent (Olivia Cooke) and Otto (Rhys Ifans) — bickering over how succession will play out. They share a common goal, but their approaches are wildly different.

Having entirely misunderstood what her husband was talking about, Alicent confides in her father that Viserys “wished” for Aegon to be king with his dying breath. Otto has always desired this — it's why he was removed from his Hand of the King position by Viserys — and naturally, he jumps at this opportunity when the small council is convened in House of the Dragon episode 9. But as the ball begins to roll and the Queen discovers that they have secretly been planning for every step in Aegon's ascension, she stops in her tracks. It's one thing to want her son to be on the Iron Throne, but it's another to sanction the murder of her childhood companion, Princess Rhaenyra (Emma D'Arcy), her husband Prince Daemon (Matt Smith), and all her children.

And she's not alone. Ser Harrold Westerling (Graham McTavish), the Lord Commander of the Kingsguard, has seen enough too. Told to go to Dragonstone and slay the very princess he was once sworn to protect, Harrold resigns from his post, noting that he has no place in these halls until there's a new king. What he's basically saying is that he won't listen to any one of them. The way he deals with these scumbags is clever, beautiful, and top notch. Five stars, no notes. Meanwhile, Ser Criston Cole (Fabien Frankel) once again shows he has no honour in House of the Dragon episode 9. Not only does he callously murder a council member who tries to protest, but he also raises his sword to his own Lord Commander. Remember how everyone was fawning over him just a few weeks ago? Ew.

But there are bigger concens than a problematic man-child in House of the Dragon episode 9. The boy everyone wants to be king is nowhere to be found. A quiet search begins for Aegon (Tom Glynn-Carney), who loves to abandon his lady wife-sister and tour the city's brothels each night. Otto dispatches the Kingsguard twins, Ser Erryk (Elliott Tittensor) and Ser Arryk Cargyll (Luke Tittensor). Alicent sends Criston along with her one-eyed son Aemond (Ewan Mitchell). All this allows for conversations to play out. The twins note how Aegon has fathered numerous bastards, many of whom are used in fighting pits. Meanwhile, Aemond reveals his interest in being king to Criston, noting he rides the biggest dragon and practices more with his sword. As if that has ever mattered, LOL.

Inside the Red Keep, it's politics as usual in House of the Dragon episode 9. Otto gathers the lords and asks them to pledge fealty to “King Aegon”. It doesn't look as though they are being given much of a choice, to be honest. It's bend the knee or lose their necks.

The Queen pays a visit to the Queen Who Never Was, who's been locked in her own room. Alicent makes a plea to get Rhaenys Targaryen (Eve Best) and her dragon on their side, but she isn't easily swayed. “You desire not to be free but make a window in the wall of your prison,” Rhaenys says on House of the Dragon episode 9 — a line that's gorgeous in its succinctness. Alicent has served her husband, her father, and now, her sons. Have you ever imagined yourself on the Iron Throne, Rhaenys asks Alicent. As hard as that might come across, the Queen is more practical than any of them. She's looking out for the survival of her family, and not just her own ambitions. The very thing that doomed House Velaryon, thanks to Sea Snake's — Rhaenys's husband — relentless pursuit of the throne.

Outside, in Flea's Bottom, a stranger tells the Kingsguard twins she knows someone who can lead them to Aegon, but she will only meet with Otto. Turns out, Mysaria (Sonoya Mizuno) — the woman who was once Daemon's confidante and paramour, and a character who's been ignored all season — has a role to play here. Having fallen out of favour with Daemon, she uses Aegon as a bargaining chip to regain some sense of power in House of the Dragon episode 9.

Prey, House of the Dragon, and More on Disney+ Hotstar in October

But when Aegon is eventually found by the Cargylls in House of the Dragon episode 9, Criston and Aemond show up and snatch him. Aegon just wants to be left alone by everyone. He even tells Aemond he's willing to sail away from Westeros for good, allowing his brother to be king. Criston isn't giving any of that a chance; he's made a promise to the Queen, after all.

With Alicent now firmly in control, she pays a visit to her father. They rehash some of the stuff they've said before. Otto notes that killing Rhaenyra, Daemon, and their children is necessary for the stability of the realm. Otherwise, many might die in war. It's brutal, but he might have a point. He thinks his daughter is being squeamish because Rhaenyra was her friend, but Alicent says that reluctance to murder is not a weakness. The Queen believes she can oversee a bloodless transition if they give Rhaenyra “good terms”, but that's the second occurrence of naivety on her part in House of the Dragon episode 9. (The first was her shock at how everyone had been planning on Aegon's succession. Does she not realise how the patriarchy works?)

It's indicative of the blinders she's been wearing all episode. Alicent wants her son to be king, all because her husband wished it on his deathbed. For 20 years, Viserys kept saying that Rhaenyra was his chosen heir. Does Alicent really believe that her husband changed his mind less than an hour after dinner where he settled the matter? Why is she putting so much stock in the words of an old ailing man whose body was full of strong medicine? Her intentions are clear from the fact that she wants to crown Aegon as soon as possible, without bringing Rhaenyra into the loop. While the Queen might not desire bloodshed, she's essentially called for it by pulling off a usurper's move in House of the Dragon episode 9.

House of the Dragon episode 9 is now streaming on Disney+ Hotstar in India, and HBO Max wherever available. New episodes release every Monday at 6:30am IST/ Sunday at 9pm ET.