Vishal Bhardwaj, Hansal Mehta, and Shonali Bose all falter — some more than others. 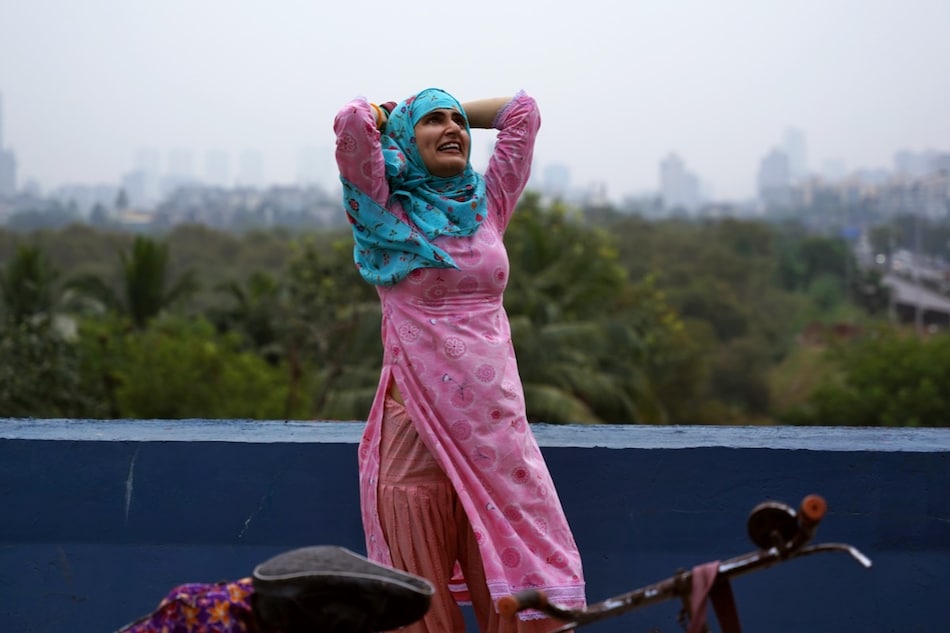 Modern Love Mumbai — the first Indian spin-off of rom-com anthology Modern Love, now streaming on Amazon Prime Video — opens with the same words as its American counterpart: “Inspired by personal essays from The New York Times column Modern Love. Certain elements have been fictionalised.” But curiously, unlike the original, Modern Love Mumbai doesn't reveal who wrote the columns the six episodes are inspired by. Why is it hiding the names of the authors? It begs the question: are these truly Mumbai stories submitted by Indian readers of NYT? Or — allow me my cynical ponderings — are these global stories transplanted to an Indian context? That occurred to me at times as I saw Modern Love Mumbai, more so because the episodes didn't pull me in.

That's because most of its stories — each Modern Love Mumbai episode is standalone, since it's an anthology — are humdrum. While some episodes start off poorly and never get you on their characters' side, others begin in a promising manner only to fade out eventually. Many don't earn their insights, consist of clunky dialogues, or make superficial observations. And some cram too much into their 40-minute runtimes. (I imagine some chapters in next week's Love, Death + Robots season 3 will deliver more in about one-fourth the time.) Though there are individualistic failures — even renowned hands in Vishal Bhardwaj, Hansal Mehta, and Shonali Bose falter, some more than others — it's hard not to look past the guiding hands too.

While The New York Times, and Modern Love creator, director and executive producer John Carney are involved in some capacity, Modern Love Mumbai is ultimately a production of Pritish Nandy's banner. And it shares not just some of the same problems as their Prime Video claim to fame, Four More Shots Please!, but also their makers. Pritish's two daughters, Rangita Pritish Nandy and Ishita Pritish Nandy, are executive producer and co-executive producer here. Four More Shots Please! season 2's writer and director also get the final Modern Love Mumbai episode to themselves. Instead of looking for new partners to make its rom-com anthology, Amazon simply turned to the folks already making a (frivolous surface-level) rom-com for it. Even platforms are engaging in nepotism now.

The bar is ultimately set very low on Modern Love Mumbai, and Little Things creator Dhruv Sehgal — the most inexperienced of his peers here, in contrast to the aforementioned Bhardwaj, Mehta, and Bose — clears it not just easily but properly. His short and the fifth episode “I Love Thane” looks really good in front of the others, though it's only because the comparison is so stark. Through the viewpoint of a landscape designer in her mid-30s (Masaba Gupta) who's realising she's unfulfilled and incompatible with most men — until she chances upon a guy from Thane (Ritwik Bhowmik) who works for the local government council — Sehgal and his co-writer Nupur Pai (Little Things season 3 and 4) touch upon what online dating is like in a much truer sense than the surface-level Eternally Confused and Eager for Love.

There's a wonderful and comical shot early into “I Love Thane”, where two women lock eyes as they drift off what are demonstrably two of the world's worst dates. In a couple of seconds, Sehgal not only succinctly reinforces the “men are s**t” philosophy that's taken hold in our generation, but also skewers the supposed “liberal” and “feminist” men who are arguably worse than their polar opposites. “I Love Thane” does land in a typical rom-com groove after a point, but it's the small but deep insights Sehgal draws that stand out. And importantly, Sehgal is unwilling to compromise on his vision for the sake of Western audiences — Modern Love Mumbai is as Indian facing, as it is outward facing, I would argue — unlike what Hansal Mehta does on his “Baai”, the second episode.

On “Baai”, when a character namechecks a Bollywood actress, the subtitles translate it into Julia Roberts. But on “I Love Thane”, when characters bring up neighbourhoods such as Thane, Bandra, and Naupada — they are presented as is in the subtitles. Sehgal expects audiences to follow along, or read up after they finish the episode to fully understand dialogues where a character complains to another about making them “drive all the way to Thane.” This is how it should be. After all, this is how Hollywood has treated the world. New York's boroughs — at least their names — are now recognised globally. Even a Marvel movie doesn't dumb itself down, when Captain America and Spider-Man trade barbs over Queens and Brooklyn. And we shouldn't be doing it either.

Doctor Strange 2 Review: The Multiverse of Madness Is Too Much and Too Little

Mehta's “Baai” does have a few things going for it. The personal highlight for me is an early one-shot in a car — the director reunites with his Scam 1992 cinematographer Pratham Mehta on Modern Love Mumbai — during the Bombay riots, which is truly epic and harrowing. It reminded me of Children of Men's car sequence, and one of the most memorable sequences I've seen recently. “Baai”, written by Mehta and debutant Ankur Pathak, gets off to a nice start, but it runs out of steam. Mehta follows a gay Muslim man (Pratik Gandhi), a minority in a minority — not the first LGBTQ+ story for the director, he also made the Manoj Bajpayee-led Aligarh.

“Baai” does everything we've come to expect from stories about LGBTQ+ individuals in repressed societies — there's a very real inclusion of how violence is more prevalent in gay men — but it drifts off owing to its tangents. That's clear from its title, which refers to the protagonist's grandmother. But the bigger problem for Modern Love Mumbai episode 2 is that the actors — celebrity chef and restaurateur Ranveer Brar plays Gandhi's boyfriend and future husband — aren't believable as gay men. The wedding scene is 👎🏼 and the intimacy scenes are downright laughable. It's like they are smushing their faces and bodies against each other, rather than actually embracing and kissing one another.

Mehta also tries to place food at the centre of his story — the grandmother is known for her cooking, and Brar's character is a chef — but it's lost in the middle of everything else and never comes into its own. Vishal Bhardwaj does much better in centring his tale, “Mumbai Dragon”, around food. Like Mehta, Modern Love Mumbai episode 3 — written by Bhardwaj and debutant Jyotsna Hariharan — focuses on outsiders. In his case, Chinese-origin Indians who continue to be treated as the other, despite suffering through more than most Indians. (The story is hence a mix of Hindi, Cantonese, Punjabi, and English.)

From Modern Love Mumbai to Stranger Things 4, the Nine Biggest Web Series in May

Though Meiyang Chang's wannabe playback singer gets more of the plot, it's his mother (Yeo Yann Yann) who gets to shine on Modern Love Mumbai. Kudos to her for taking on role that's largely in Hindi — she can't sound like a natural, but she does her best. Yann's mother is holding onto her adult son through food, as that's how she expresses her love. While “Baai” is partly about how food is really about love, “Mumbai Dragon” does a better job of conveying that. In Mehta's tale, it fades into the background. Baai is supposed to be a killer chef, but it's not part of the picture — it's past. Bhardwaj ends his with a perfect food shot, which conveys more than dialogues or actions could.

There are generic parts to Bhardwaj's Modern Love Mumbai episode as well. Not only does it meander in the middle, it's feeding into an overly-optimistic self-fulfilling image. Bollywood the dream machine has always liked to fuel its own mythos, though I expected more from someone like Bhardwaj. I wasn't expecting much from Shonali Bose (The Sky Is Pink) and Alankrita Shrivastava (Dolly Kitty Aur Woh Chamakte Sitare), and despite that, their stories heavily under-deliver.

“Raat Rani” — Modern Love Mumbai episode 1, written by Nilesh Maniyar (The Sky Is Pink) and feature debutant John Belanger — is the only one that's about people falling out of love, not in it. The big stumbling block for Bose's episode is that Fatima Sana Shaikh's Kashmiri accent is outright hilarious. On top of that, you can't relate to the characters from the beginning because the start is so abrupt. But more importantly, “Raat Rani” doesn't earn any of its scenes. Wholly disjointed, it simply jumps from one thing to the other. Bose wants “Raat Rani” to be a women empowerment story at its heart, but major moments of growth happen off screen.

This is also an issue with “My Beautiful Wrinkles” — written by Shrivastava, its title and Mumbai geography is also out of place — where a separated grandmother (Sarika) is propositioned, by a young man (Danesh Razvi) she's tutoring, in a way that should constitute sexual harassment. Despite the racy overture, Modern Love Mumbai episode 4 is puerile throughout, almost as if it's ashamed to actually dive into what it's about. “My Beautiful Wrinkles” fizzles out very quickly, and ends in a cheesy, cop out fashion, which betrays that it had nothing to say of value. It also has the clunkiest dialogues of any episode in this Prime Video anthology, with its characters saying things that are found on coasters and t-shirts. It's a case of Shrivastava coming up short in every department.

Made in Heaven Review: Amazon Series About Indian Weddings, Is Both Big and Fat

That leaves what I called the nepotism story, as it's the one made by Four More Shots Please! season 2 director Nupur Asthana and writer Devika Bhagat. “Cutting Chai”, starring Chitrangda Singh and Arshad Warsi as a couple in their forties, romanticises problematic aspects of Indian males. I've nothing more to say, because that's basically the entire episode. Except the sixth and final Modern Love Mumbai episode flips in the final nine minutes, as it attempts to bring it all together and ascribe meaning to the entire series in a corny fashion.

Out of nowhere, Modern Love Mumbai destroys its anthology aesthetic on “Cutting Chai”, with characters from the first five episodes temporarily taking over. It's not as bizarre for those who've seen Modern Love, because the original did the same, as a friend informed me. That doesn't make it any less abrupt though. Some scenes pay off on earlier resolutions, but with others, it's like revisiting past trauma. It's a somewhat fitting conclusion and, in a way, the worst possible end, because by recapping and giving us tiny epilogues, Modern Love Mumbai only serves to remind us how poor the anthology is.

All six episodes of Modern Love Mumbai are released Friday, May 13 at 12am IST on Amazon Prime Video in India and around the world.