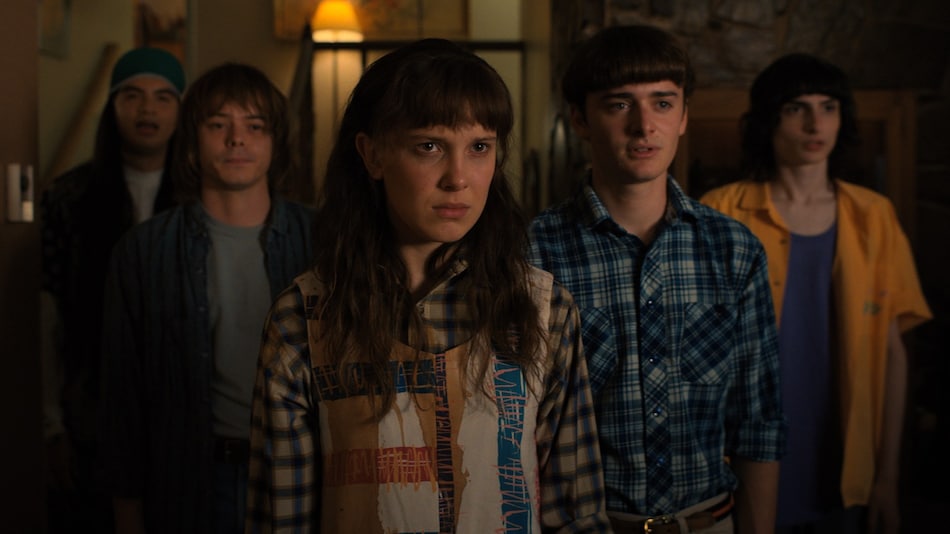 Stranger Things 4 — now streaming on Netflix — is bigger than before, that's for sure. Nearly every chapter in the seven-episode Volume 1 is longer than 70 minutes, with Stranger Things season 4 episode 7 clocking in at 100 minutes. Thanks to the three-year gap between seasons, the kids are more grown-up than ever. I can imagine some viewers being thrown by how some of the actors have outgrown their characters. They are so visibly bigger that Stranger Things 4 ends up using de-aging tech on teenagers for flashback scenes, usually a tactic reserved for older actors such as Robert De Niro in The Irishman, or Samuel L. Jackson in Captain Marvel. While it revisits some old horrors in places, Stranger Things 4 also throws more CGI monsters at us.

But in trying to be bigger, grislier, and longer than ever, Stranger Things 4 — still run by creators Matt and Ross Duffer aka The Duffer Brothers, as head writers and primary directors — ends up feeling a lot like standard genre stuff of its ilk. The bigger problem though isn't that the new season of the hit Netflix series is formulaic. It's that it's in lacking in joy and humour. Stranger Things 4 is so immersed in its plot demands that it forgets what made the previous seasons exciting. There are no mall hijinks (Stranger Things 3) here, nor any Ghostbusters-type nostalgia (Stranger Things 2). Attempts to liven up the proceedings on Stranger Things 4 are few and far between.

The highlight comes early into the season, when a new character wonders how they plan to kill the giant and menacing new thing — once again inspired by Dungeons & Dragons — from Upside Down. Season 3 entrant Robin Buckley (Maya Hawke) points out that they have been through this kind of thing before, with some more than once, unlike her. “Mine was human flesh related, theirs was smoke related,” Robin says. Stranger Things 4 is essentially mocking itself, and how there's a new crazy thing every season. Steve Harrington (Joe Keery) adds that they usually rely on this girl who has super powers, but that's out now. To an outsider, the gang looks completely crazy. Stranger Things 4 could've done with more of these self-referential moments.

Stranger Things 4 to Obi-Wan Kenobi: the Nine Biggest Web Series in May

Unfortunately, there are bigger problems. Owing to writing choices made this season or the last, some characters have very little to do on Stranger Things 4. Others are entirely on their own, or stuck in completely tangential subplots. The Netflix show's universe has expanded so much — but rather than being a boon, it's a bane. Stranger Things 4 feels disjointed as a result. It takes a while to bring the gang back together, and those parts come across as spinning the wheels. I wouldn't go so far to call it table setting for the fifth and final season, but it's definitely bloat. I enjoyed parts of Stranger Things 4, and I snoozed through other portions. Unfortunately, the latter significantly trumps the former in sheer amount.

At times, it feels like Stranger Things 4 is more interested in subverting audience expectations, than it is in delivering a cohesive story where its ensemble is back together as a whole.

Of course, it doesn't help that the episodes are so long. And while the seven-episode Volume 1 might look like roughly 80 percent of the way through season 4, it's not. The final two episodes are movie-length, with director and executive producer Shawn Levy revealing they are longer than the two Ryan Reynolds movies — the action-comedy Free Guy, and the sci-fi adventure The Adam Project — he's made during Stranger Things' three-year hiatus. That means Volume 1 might be closer to being two-thirds of the way through. That's a long endgame. But critics weren't given access to them, so this review only pertains to Volume 1.

Following the first eight minutes that Netflix has already revealed — an in medias res tease whose mystery is solved much later into the new season — Stranger Things 4 jumps to present day. And by present day, I mean 1986. Six months have passed since the Battle of Starcourt Mall, with Eleven (Millie Bobby Brown) counting the days she's been away from her boyfriend Mike Wheeler (Finn Wolfhard). Via a letter to Mike, she gives us a lowdown on what's going on with everyone in the family. Joyce Byers (Winona Ryder), who took Eleven and her kids Will (Noah Schnapp) and Jonathan (Charlie Heaton) to California at the end of Stranger Things 3, is working from home. Will's gotten into painting, and Jonathan and his new best friend Argyle (Eduardo Franco) “like to smoke smelly plants together.”

Stranger Things 4, Love Death & Robots Volume 3, and More on Netflix in May

Meanwhile back in Hawkins, Mike is preparing to fly to California for spring break to see Eleven. Dustin Henderson (Gaten Matarazzo) is hacking his school scores with his long-distance girlfriend Suzie (Gabriella Pizzolo). Lucas Sinclair (Caleb McLaughlin) and Max Mayfield (Sadie Sink) have broken up, with the latter deeply affected by her brother Billy's death at the end of Stranger Things 3. Max seems to have reverted to her cold self, while Lucas has gotten himself into the basketball team, tired of being bullied and girls laughing at him. Steve Harrington (Joe Keery) has girl problems of his own, while his platonic friend Robin Buckley (Maya Hawke) is trying to ask a girl out, though she's not sure she's lesbian too. A major new entrant to the gang is Eddie Munson (Joseph Quinn), an outgoing Hawkins High senior and the founder of Hellfire Club, a Dungeons & Dragons playgroup.

A series of deaths in Hawkins kick off an investigation — both by the police and our gang. But the group is split this time, as you can tell, with (less than) half of them over in California. Stranger Things 4 also brings in the Satanic Panic that grabbed America in the ‘80s, with a bunch of jocks hunting down Hawkins students because they are involved with D&D. (It would be dumb and hilarious were this not based on a real thing.) There are easy parallels to be drawn here to the culture clash in the US today. Meanwhile, Joyce begins an investigation of her own, after getting an eerie doll in the mail. And for the second year running — following the Marvel movie Black Widow — David Harbour finds himself in a Russian prison. Except he's not a superhero, and neither are his saviours.

Beyond the many adventures it thrusts the gang into, Stranger Things 4 also wants to examine Eleven's traumatic past. Bred as an experiment, she responds to any trigger with physical violence. And having lost her powers on Stranger Things 3, Eleven tries to regain them on the new season. But Stranger Things 4 doesn't really let Eleven question whether she needs the powers. Her violent reactions are proof that she needs to get away from her past self. Instead, Eleven does the opposite for herself on Stranger Things 4. On some level, it seems like Eleven has a saviour complex. Additionally, Eleven's Stranger Things 4 arc contributes more to the season's narrative needs, rather than being a deeper examination of her formative years.

All You Need to Know About Stranger Things 4

In fact, the plot takes so much precedence on Stranger Things 4 that, at times, it feels like the Netflix series doesn't really have time for conversations. Characters will have honest, revealing moments, before another character who was listening to them will reset it to bring the focus back to the story.

And though Stranger Things 4 is engaging in the early run, it loses steam deeper into the seven-episode Volume 1. Not only is there too much plot, all the jumping between various threads isn't always natural. Stranger Things 3 wrote itself into a corner, it seems in hindsight. It expanded its world beyond Hawkins, though I'm not sure how much sense I see in it now, having watched seven episodes of a show that's struggling for impetus and forward momentum, outside its Hawkins plot threads. Hawkins still occupies a lot of Stranger Things, but there's a lot more going on outside of it too. And it obviously doesn't help that some of those threads meander.

Mike, Will, and Jonathan are essentially removed from the show. Joyce and Murray (Brett Gelman) set out on an adventure, while Eleven is pretty much on her own. And Hopper was sequestered away from these folks at the end of Stranger Things 3 itself. While the bulk of the gang is still working together in Hawkins, it's never as exciting, joyous, or enjoyable as previous seasons. What we're left with — at least in Volume 1 — is a disjointed poorer show, unfortunately. One that's trying to go in various directions, but doesn't always have the room for it, despite the aforementioned crazy runtimes. I'm afraid Stranger Things 4 has gotten too big for its own good.