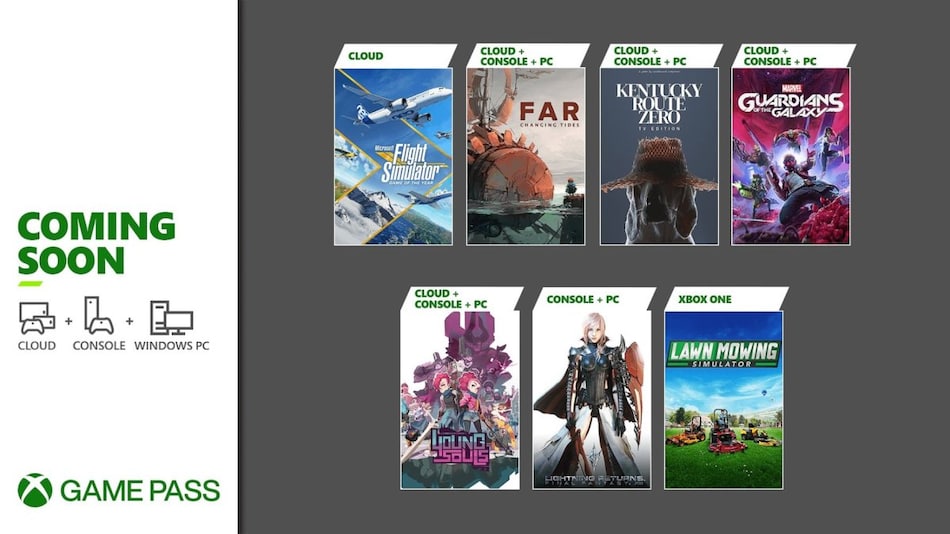 The biggest addition this month, however, is the much-acclaimed Marvel's Guardians of the Galaxy

Xbox Game Pass is adding eight new games to its roster in March. Microsoft has revealed that Far: Changing Tides, Shredders, and Young Souls will be available as day one titles. The biggest addition this month, however, is the much-acclaimed Marvel's Guardians of the Galaxy. Meanwhile, Microsoft Flight Simulator is finally available on Xbox One, in addition to phones and other devices, as it lands on Xbox Cloud Gaming which is not yet available in India. The list of games coming to Xbox's subscription service this month also includes titles such as popular RPG Lightning Returns: Final Fantasy XIII, point-and-click adventure Kentucky Route Zero, and Lawn Mowing Simulator, which lets players enjoy the challenge and serenity of tending to virtual gardens.

Microsoft revealed the list of titles coming to Xbox Game Pass this month via its Xbox Wire blog, while listing new DLCs and updates for existing games. Microsoft also announced that the newest Installation and Game Management features are available for the Xbox app on PC. Additionally, on March 15, four games will leave the Xbox Game Pass roster of games available for subscribers.

Some of the titles listed in the March Xbox Game Pass roster will be playable on Windows PC, Xbox consoles, and on Xbox Cloud Gaming. According to Microsoft, there are more games coming later this month, as tends to be the case in most months.

Microsoft removes a few games from the Xbox Game Pass every month, as new ones are added to the roster. As previously mentioned, four titles will leave the Xbox Game Pass library in March. Gamers can pick up these titles at a 20 percent discount with their membership, before they are removed.

Here are the games leaving the Xbox Game Pass on March 15:

Microsoft's Xbox Game Pass comes in at Rs. 489 per month on PC and console in India. The price of Xbox Game Pass Ultimate (including EA Play, Xbox Live Gold/ Xbox network, as well as game streaming in select markets) is set at Rs. 699 per month.