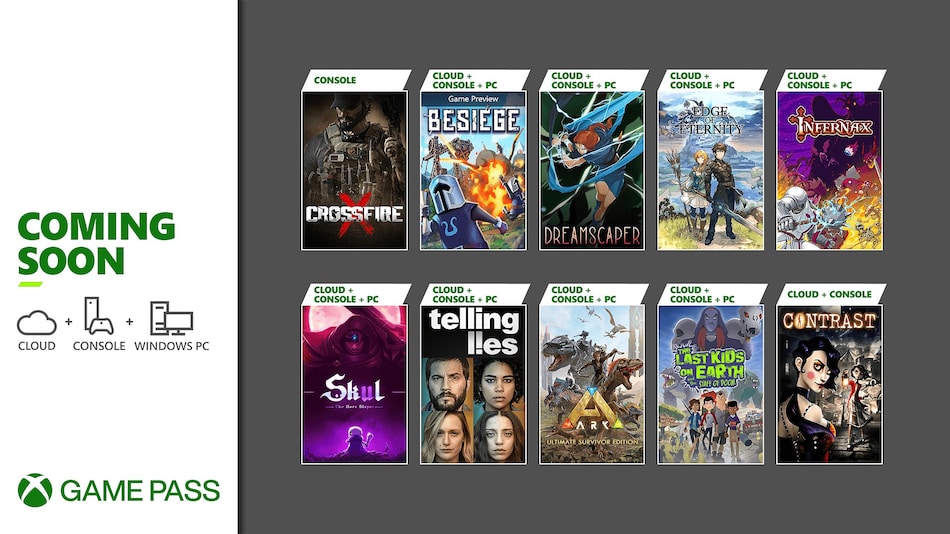 Xbox Game Pass is set to add ten new games to its roster in February. Microsoft has revealed that CrossfireX, Edge of Eternity, and Infernax will be available as day one titles as part of the Xbox Game Pass for February. Meanwhile, the list of games coming to its subscription service this month include titles like Contrast, Dreamscaper, Telling Lies, Besiege, Skul: The Hero Slayer, The Last Kids on Earth and the Staff of Doom, and Ark: Ultimate Survivor Edition. On February 15, six titles will leave the Xbox Game Pass roster of free games available for subscribers.

Microsoft revealed the list of titles coming to Xbox Game Pass this month on its Xbox Wire blog, while listing new DLCs and updates for existing games. Gamers will also be able to access some of these titles via Microsoft's Xbox Cloud Gaming service that is available in select markets. Eight games arriving this month are part of the ID@Xbox initiative, according to Microsoft.

Some of the titles listed in the February Xbox Game Pass roster will be playable on Windows PC and on Xbox Cloud Gaming, while all of the games will be available on Xbox Series S/ X and Xbox One consoles, according to Microsoft. Gamers who subscribe to Xbox Game Pass Ultimate will also gain access to perks such as Smite: Season 9 Starter Pass, World of Warships: Exclusive Starter Pack, and Phantasy Star Online 2: February Member Monthly Bonus, as part of the Xbox Game Pass Ultimate perks for February.

Every month, Microsoft removes a few games from the Xbox Game Pass, as new ones are added to the roster. As previously mentioned, six titles will leave the Xbox Game Pass library in February. Gamers can pick up these titles at a 20 percent discount with their membership, before they are removed. Here are the games leaving the Xbox Game Pass on February 15: