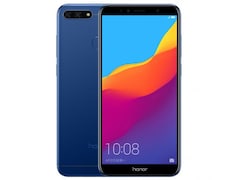 Honor 7A mobile was launched in April 2018. The phone comes with a 5.70-inch touchscreen display offering a resolution of 720x1440 pixels at a pixel density of 282 pixels per inch (ppi) and an aspect ratio of 18:9. Honor 7A is powered by an octa-core Qualcomm Snapdragon 430 processor that features 4 cores clocked at 1.4GHz and 4 cores clocked at 1.1GHz. It comes with 2GB of RAM. The Honor 7A runs Android 8.0 and is powered by a 3000mAh non-removable battery.

As far as the cameras are concerned, the Honor 7A on the rear packs a 13-megapixel (f/2.2) primary camera, and a 2-megapixel camera. The rear camera setup has phase detection autofocus. It sports an 8-megapixel camera on the front for selfies with an f/2.0 aperture.

Connectivity options on the Honor 7A include Wi-Fi 802.11 b/g/n, GPS, Bluetooth v4.20, Micro-USB, FM radioWi-Fi Direct, 3G, and 4G (with support for Band 40 used by some LTE networks in India). Sensors on the phone include accelerometer, ambient light sensor, proximity sensor, and fingerprint sensor. The Honor 7A supports face unlock.

Honor 7A Price in India

Price too high? Subscribe to our price drop alert Get Price Drop Alert
Choose a variant

Honor 7A User Review and Ratings