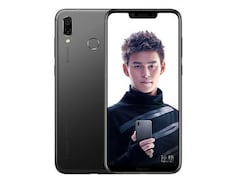 The Honor Play has been launched in India by Huawei sub-brand Honor. It offers specifications such as a HiSilicon Kirin 970 SoC and a dual camera setup at a price of Rs. 19,999 for the 4GB RAM variant and Rs. 23,999 for the 6GB RAM configuration. The Honor Play is also the first smartphone in India to feature GPU Turbo, a technology that Huawei is touting to be the next big revolution in mobile gaming.

Honor Play mobile was launched in June 2018. The phone comes with a 6.30-inch touchscreen display offering a resolution of 1080x2340 pixels and an aspect ratio of 19.5:9. Honor Play is powered by a 2.36GHz octa-core HiSilicon Kirin 970 processor that features 4 cores clocked at 2.36GHz and 4 cores clocked at 1.8GHz. It comes with 4GB of RAM. The Honor Play runs Android 8.1 and is powered by a 3750mAh battery. The Honor Play supports proprietary fast charging.

The Honor Play runs EMUI 8.2 is based on Android 8.1 and packs 64GB of inbuilt storage that can be expanded via microSD card (up to 256GB). The Honor Play is a dual-SIM (GSM and GSM) mobile that accepts Nano-SIM and Nano-SIM cards. The Honor Play measures 157.91 x 74.27 x 7.48mm (height x width x thickness) and weighs 176.00 grams. It was launched in Midnight Black and Navy Blue colours.

Honor Play price in India starts from ₹ 11,999. The lowest price of Honor Play is ₹ 11,999 at Amazon on 5th February 2023. This Phone is available in 1 other variant like 6GB RAM + 64GB Storage with colour options like Midnight Black, Navy Blue, and Ultra Violet.