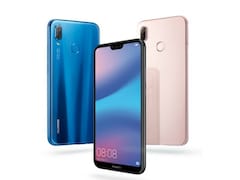 While Huawei's sub-brand Honor has been quite active in India, the company hasn't launched phones under its own name as frequently. The Huawei P20 Lite is one of the two new smartphones launched by the Chinese giant in India, the other being the P20 Pro (Review). Despite sharing the P20, the Lite has little in common with the Pro, though it features a glass-and-metal body, dual rear cameras, a 19:9 display, and runs Android 8.0 Oreo out of the box.

As far as the cameras are concerned, the Huawei P20 Lite on the rear packs a 16-megapixel camera with an f/2.2 aperture and a pixel size of 1.0-micron. The rear camera setup has phase detection autofocus. It sports a 24-megapixel camera on the front for selfies.