An online petition was also started against the Shaadi.com filter on Change.org 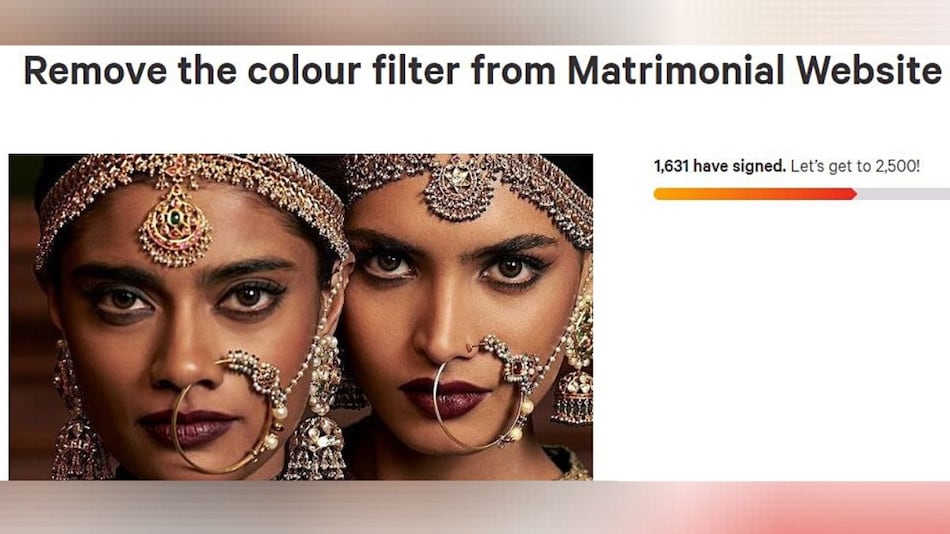 The online petition received over 1,400 signatures in 14 hours

Shaadi.com - the popular matrimonial website - has removed a controversial skin colour search filter after facing backlash from people across social media platforms. The 'skin colour' filter, as the name suggests, allowed users to search potential partners on the platform based on the colour of their skin. The protest against this feature had also gained momentum after an online petition was launched earlier in June. Shaadi.com in a tweet on June 11 had announced the removal of the filter. Gadgets 360 is also able to confirm the removal of the search filter from the platform.

The petition against the search feature on Shaadi.com was started by US-based, Hetal Lakhani via Change.org. In her petition online, Lakhani had stated, "We demand that Shaadi.com must permanently remove its skin colour filter to prevent users from selectively searching for matches based on their preferred skin colour."

Speaking more about the online petition, Lakhani told BBC that she found about the filter through a user on a Facebook group. She adds that her petition against Shaadi.com' search feature received over 1,500 signatures within 14 hours.

" I was really shocked because a company usually has a social responsibility... I wanted to tackle this in a way that could make a difference," the report citing Lakhani adds.

In response to a tweet regarding the feature, the company stated that the filter "doesn't have any implication on the matchmaking." However, it was a "blind spot," and the feature has been removed, the company adds.

The issue came under the spotlight amid anti-racism protests across the world that was triggered by the death of George Floyd in the US last month. Recently, Snapchat also faced a backlash from users after it added a Juneteenth filter that was considered racist. The company had then issued an apology and removed the Lens.