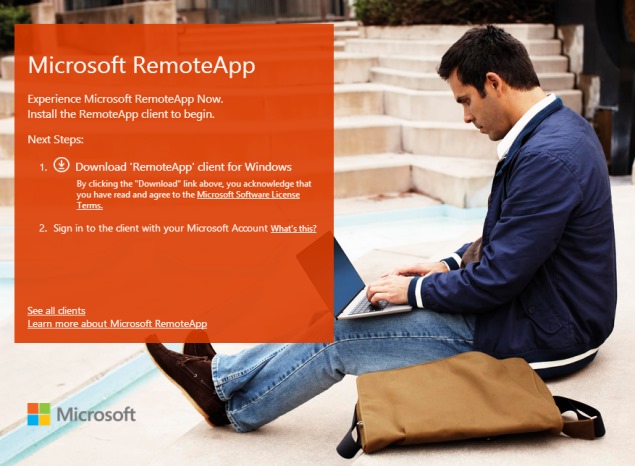 Microsoft has taken the wraps off its long-awaited Azure RemoteApp desktop-as-a-service (DaaS) offering for corporate Windows users, formerly known by its internal codename Mohoro. The final launch of the Azure RemoteApp service will mark Microsoft's entry into a highly competitive and important new market which has not been adequately addressed before.

With its commitment to a new "cloud-first, mobile-first" strategy, as outlined by new CEO Satya Nadella earlier this year, Microsoft will be able to cater to users across multiple platforms including mobile devices, with software written for a common platform.

DaaS is growing in popularity with large businesses as resources such as computing power and storage space can be dynamically allocated to users as and when they need them, on any device and in any location, rather than the one-desktop-per-user model which ties people to specific amounts of each resource. Virtualised desktops can be created on demand, scaling to the organisation's requirements. Tasks can take advantage of the combined unused capacity of provisioned infrastructure as a whole at any given time.

Similar to existing uses of Remote Desktop Protocol software and Remote Desktop Web Access, DaaS goes even further by relieving subscribers of the need to maintain their own backend infrastructure. Internet connectivity and a "cloud" backbone enable subscriber companies to offer their employees access to software, databases and collaborative tools from any location.

Companies such as Citrix and VMware are already heavily invested in providing DaaS subscriptions to businesses of all sizes. Microsoft has so far held out, preferring to sell multiple Windows desktop and server licenses, but is now seemingly ready to enter the fray. Rather than an entire user desktop, Microsoft's Azure RemoteApp will deliver individual programs which will run on client devices as though they were natively designed for them.

These programs will run across OS platforms on smartphones and tablets as well as desktop and laptop PCs. Windows, OS X, Android, iOS and Windows Phone are all supported via existing remote desktop clients. This ties in with the emerging BYOD (Bring Your Own Device) movement, thanks to which companies need to cater to a variety of device and platform types.

While Microsoft already offers its Office programs as part of the preview, other software vendors would have to support Microsoft's Azure services infrastructure. IT administrators would then simply allocate programs and permissions to users, after which they would be able to access them as easily as signing in to the RemoteApp user-facing website through any Web browser.

The success of cloud-based services depends on fast, reliable and ubiquitous Internet access, which will be a limiting factor in many parts of the world.

The announcements took place at Microsoft's annual TechEd conference. The new Azure RemoteApp offering is now in public preview, and organisations can provision up to 20 users with access to the software they require. No specific date for the formal launch has been announced, although sources indicate it will happen before the end of 2014. No pricing information has been disclosed either.
Comments