The Mi Notebook Ultra fixes a lot of its predecessor's shortcomings, making a strong case for itself in the premium segment 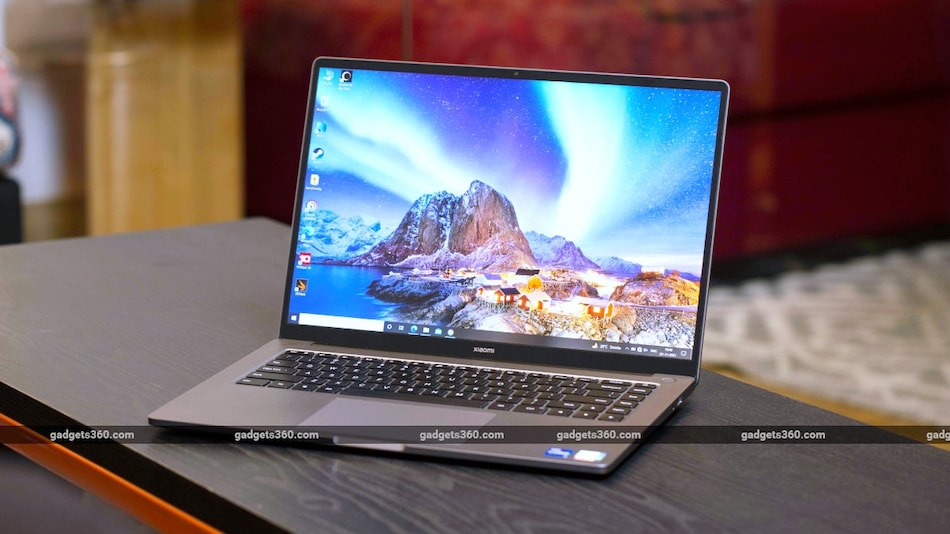 The 2021 Mi Notebook models which are called the Mi Notebook Pro and Mi Notebook Ultra, aren't direct replacements for last year's Mi Notebook 14 family of ultraportables. These are both a more premium but also a bit larger, with value-added features that you might find compelling for everyday work as well as entertainment on the go. They are positioned above the new Redmibook series, which was launched this year. More importantly, they fix a lot of the shortcomings of last year's models, giving Xiaomi a stronger foothold in the Indian laptop market.

We have with us today the new Mi Notebook Ultra, which is a premium 15.6-inch laptop aimed at creative professionals and anyone who wants more power and performance than the entry-level segment can deliver. Priced starting at Rs. 59,999, this is not the most slick or portable laptop around, but it does offer style, features, and performance. Let's get started with our full review.

The Mi Notebook Ultra is a step above the Mi Notebook Pro which was launched at the same time. The Ultra model is physically larger, with a bigger screen and battery, but specifications are quite similar across both product families. Prices start at Rs. 59,999 for the base variant of the Mi Notebook Ultra, which has an 11th Gen Intel Core i5 CPU and 8GB of RAM.

Stepping up to the variant with 16GB of RAM will cost Rs. 64,999 – this is slightly higher than the Rs. 63,999 price that Xiaomi advertised at launch time, but still makes a lot of sense because the RAM is not upgradeable. The top-end variant, which we're reviewing today, has a Core i7 CPU and 16GB of RAM, and costs Rs. 76,999.

The body of the Mi Notebook Ultra is made of Series 6 aluminium. This laptop weighs 1.7kg which is well outside of ultraportable territory, but it's still easy enough to carry around every day if you need to commute. It's also quite slim at 17.9mm. In terms of construction quality, I have no complaints. The hinge feels solid, and the lid doesn't flex too much. You can open this laptop with one finger. There's a large grille for air intake on the bottom, and hot air is expelled through vents on the rear that are masked by the hinge barrel.

The metallic body has a sandblasted texture and looks quite nice, though the big black Xiaomi logo is a departure from last year's completely blank look. Other than that, the body is quite minimalist and doesn't call much attention to itself. The Mi logo below the screen on last year's models has been updated in keeping with the company's recent rebranding effort, though the product name is still Mi Notebook Ultra.

The keyboard isn't cramped, and the power button has an integrated fingerprint sensor

The most notable feature of the Mi Notebook Ultra is its 15.6-inch, 16:10 aspect ratio screen. The borders are quite slim, but there's still space at the top for a 720p webcam – dropping the webcam was a big miss for Xiaomi with the previous Mi Notebook lineup, especially since remote work and video calls have become far more important and commonplace over the past year or so.

There's enough room for a large, comfortable keyboard on the lower half of this laptop. I was happy to see a column of paging keys on the right, and thankfully, the arrow keys aren't cramped at all. You even get one macro key in the top right corner, which lets you launch any one program quickly. Adjustable backlighting addresses another of the big shortcomings with last year's models, but there are only two brightness levels (Xiaomi says three, but it counts “off” as one of them).

The power button has an integrated fingerprint sensor for Windows Hello authentication. It caches your fingerprint when you turn on the laptop so you don't have to touch it again to sign in after Windows boots up – but you have to get used to touching the button with the pad of your finger. The trackpad is large and comfortable. Windows multi-touch gestures are supported and work well. On the downside, the physical click mechanism is a little stiff.

On the left, you'll see one USB 3.2 Gen1 (5Gbps) Type-C port, an HDMI video output, one USB 3.2 Gen1 (5Gbps) Type-A port, and one Thunderbolt 4 Type-C port. DisplayPort video output is supported only through the latter, but the Mi Notebook Ultra can be charged using either of these ports. On the right is another USB Type-A port but disappointingly, this one only works at USB 2.0 speed. Finally, there's a 3.5mm audio socket. Unfortunately this laptop doesn't have an SD card slot or physical Ethernet port.

On the inside, Xiaomi has gone with Intel's 11th Gen H35-series CPUs, which are actually slightly more powerful versions of the U-series chips used for ultraportable laptops, and not part of the more powerful H-series used for gaming and high-end models. H35 refers to the 35W TDP rating, which is a measure of how much power a CPU can draw in order to run faster for longer stretches of time. Xiaomi is sticking with the integrated Intel Iris Xe graphics, and there are no discrete GPU options.

You can choose between 8GB or 16GB of RAM if you go with the Core i5-11300H CPU, but the Core i7-11370 is only paired with 16GB. The RAM is soldered and is not upgradeable. All three variants have a 512GB NVMe SSD which can be swapped, if you choose to upgrade in the future.

The 15.6-inch screen stands out in this segment for a number of reasons. It has a resolution of 3200x2000 pixels, which works out to a very comfortably 16:10 aspect ratio. It also has a 90Hz refresh rate which is uncommon for laptops in general, and Xiaomi says it covers 100 percent of the sRGB colour gamut. Brightness is however only rated at 300nits. This panel really is great for getting work done and multitasking. It's fairly crisp and bright. Colours aren't the most vibrant when watching video, but the anti-reflective finish is good for productivity.

The Mi Notebook 14 has a stereo speaker system and built-in mic. Xiaomi doesn't specify a battery capacity rating but says the battery life is good enough for 12 hours of local video playback. You get a 65W Type-C charger in the box, and should be able to charge up to 50 percent in 45 minutes. This laptop also supports Wi-Fi 6 and Bluetooth 5.1.

You get Windows 10, which is upgradeable to Windows 11. Xiaomi also includes a full license for Microsoft Office Home & Student 2019, and a utility called MIUI+ which is said to allow easy sharing of files with smartphones running MIUI, in much the same way that Apple's AirDrop feature works.

The 16:10 display aspect ratio is great for work, and the 90Hz refresh rate is uncommon

I didn't have any trouble with the Mi Notebook Ultra in everyday use. I was able to get work done, which involved multitasking with 20 or more Web apps across browser tabs. The top-end variant that I'm reviewing has more than enough power for everyday productivity and even a bit of light content creation work. Typing was comfortable thanks to good key travel, though I would have liked a slightly springier action.

The large, high-res screen is a pleasure to work on if you're used to more compact laptops. It's also decent for watching TV shows and movies on. However, music doesn't sound great at all, since the bottom-firing speakers are only just about okay in terms of volume and fullness.

Benchmarks show how well a device performs in situations that simulate intense real-world usage. Starting with PCMark 10, the Mi Notebook Ultra managed 4,680 and 4,195 points in the standard and Extended runs respectively. These figures are only marginally higher than what last year's Mi Notebook 14 Horizon Edition, with a 10th Gen Intel Core i7 CPU managed. SSD performance was measured at 2378.7MBps and 1508.2MBps for sequential reads and writes, while random reads and writes came in at 1171.2MBps and 458.5MBps respectively, which are pretty good speeds.

You should be able to play casual games just fine, but 3D titles struggled to run smoothly. Many games recognise 16:10 screens, so scaling down means you won't have to deal with stretching or letterboxing. At 1280x800 and using the Medium quality setting, Shadow of the Tomb Raider's built-in benchmark only managed to average 23fps. Far Cry 5 was able to average 30fps. Neither game looked very good at these settings, so you'll have to settle for older or simpler titles if you want to game on the Mi Notebook Ultra.

As for battery life, you should be able to get through a workday on one full charge, if your usage consists mainly of Web browsing and productivity. The heavy Battery Eater Pro 3D test ran for 2 hours, 8 minutes, which is quite good. With heavier tasks such as games and benchmarks running, the entire left side of the body including the wrist rest got quite warm. The cooling fan isn't audible at all, except when this laptop is heavily stressed.

The Mi Notebook Ultra has an understated look, and construction quality is good

The Mi Notebook Ultra has a lot going for it in terms of features and performance. You get great value for money, even compared to the entry-level Redmibook series which was also launched quite recently. The display and keyboard are the highlights of this device. Battery life is good enough for a work machine too, and the hardware should be more than enough to last for a few years. On the downside, things like the speakers, trackpad, and port selection could still be better.

Xiaomi has struck a good balance between cost, features, and performance. This isn't the most portable laptop and it definitely isn't aimed at gamers either, but you should still be able to carry it around every day and get a lot of work done comfortably. It could be a good option for students, self-employed or remote workers, and home users. The Core i7 variant tested here is well worth checking out if you have a budget that can stretch up to Rs. 80,000.

The mid-tier variant with its less powerful CPU should also be good enough for most people. This could be even better value since you still get the same high-res 90Hz 16:10 screen, comfortable keyboard, and Thunderbolt port at a significantly lower price, and the CPU specs aren't all that different. However, I wouldn't suggest considering the base variant, since it has only 8GB of RAM which isn't upgradeable. The price difference won't amount to much savings over the life of a laptop.