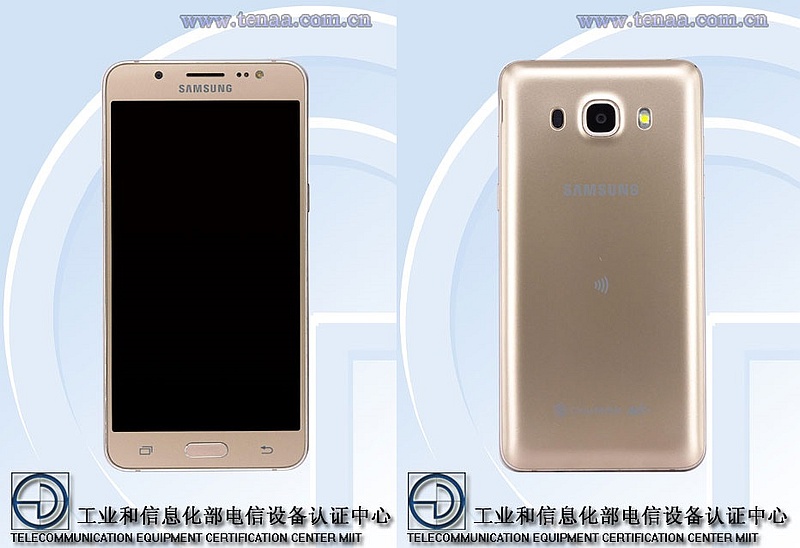 Until now, we came across different benchmark results, Bluetooth certifications, and other leaks for the unannounced Samsung Galaxy J7 (2016) and the Galaxy J5 (2015) except any live images or press renders. However, the two smartphones for the first time have showed up in images as they have reportedly gone through Tenaa, a Chinese certification site. The listing also reveals some of the specifications.

The models include 4G LTE support, 13-megapixel rear camera, 5-megapixel front-facing camera (with LED flash), 3GB of RAM, and 16GB expandable storage. The battery capacity has not been mentioned but latest rumours point towards a 3300mAh battery. It measures 151.7x75.9x7.6mm and weighs 166 grams.

On the other hand, the Galaxy J5 (2016) has a smaller screen with lower resolution and less powerful processor as mentioned above. The smartphone is seen featuring 2GB of RAM as well. Camera and inbuilt storage specifications stay the same as the Galaxy J7 (2016). The Galaxy J5 (2016) measures 145.7x72.3x7.9mm, weighs 155.4 grams, and will come in White, Gold, and Pink Gold colours. The listing also shows the two smartphones running Android 5.1 Lollipop out-of-the-box.

It is worth pointing out that the duo are seen featuring what appears to be a laser autofocus module along with the rear camera. If true, this would also make the handsets first from the company to feature such camera sensors. The laser autofocus sensor first appeared with LG G3 and later came as a feature in other handsets.

Intex Cloud Breeze With 5-Inch Display Launched at Rs. 3,999
Why Haven't Aliens Contacted Us Yet? Scientists May Have the Answer