Motorola Edge 20 Series Teased to Launch on August 5: All Details

Motorola Edge 20 Pro is teased to feature a quad camera setup with a 108-megapixel main camera. 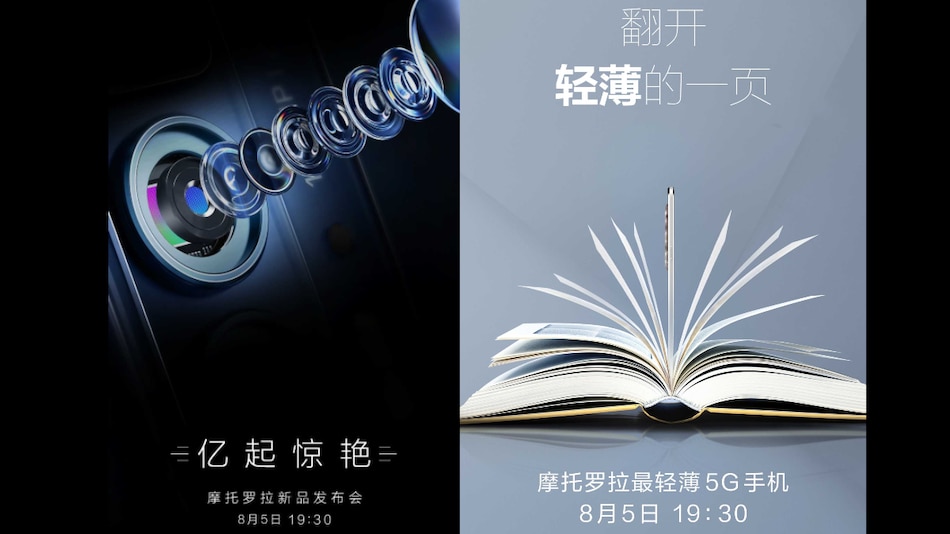 Motorola Edge 20 series is all set to launch on August 5. The company took to Weibo to announce the arrival of a new smartphone series. While the name of the new series has not been unveiled in the poster, the Motorola Edge 20 Pro was spotted on TENAA recently, hinting at an imminent launch of the smartphone. The series is also expected to include a vanilla Motorola Edge 20 and a Motorola Edge 20 Lite model as well. The base variant is said to don a flat display and a 108-megapixel main sensor at the back.

Lenovo-owned Motorola took to Weibo to announce the arrival of a new smartphone series in China. The teaser shows the back camera sensors of a phone, hinting that the big highlight of the model will be its cameras. A recent leak suggests that the Motorola Edge 20 series may get a 108-megapixel main sensor, and the poster seems to hint at the same. This could mean that Motorola is gearing up to launch the Edge 20 series next month. Another teaser hints that the phones will be thin and lightweight.

Motorola Edge 20 series is said to include the Edge 20, the Edge 20 Lite, and the Edge 20 Pro phones. The Edge 20 Pro was recently spotted on TENAA and is tipped to run on Android 11 and have a quad camera setup at the back. The phone is likely to pack a 4,230mAh battery and offer up to 12GB RAM and up to 512GB of storage. Previous leaks suggest that the Edge 20 Pro may feature a 6.67-inch (2,400x1,080 pixels) full-HD display with a 120Hz refresh rate. It is expected to be powered by a Snapdragon 870 SoC. At the front, it may have a 32-megapixel selfie shooter.

Leaks regarding the Motorola Edge 20 series suggest the phone may have a 6.7-inch full-HD+ (1,080x2,400 pixels) hole-punch flat display with a 120Hz refresh rate. It is tipped to be powered by a Snapdragon 778G SoC paired with up to 8GB of RAM and up to 256GB of storage. At the back, its triple rear camera setup may include a 108-megapixel main sensor, a 16-megapixel secondary sensor, and an 8-megapixel tertiary unit. Lastly, the Motorola Edge 20 is tipped to pack a 4,000mAh battery. The phone is expected to feature a side-mounted fingerprint sensor.