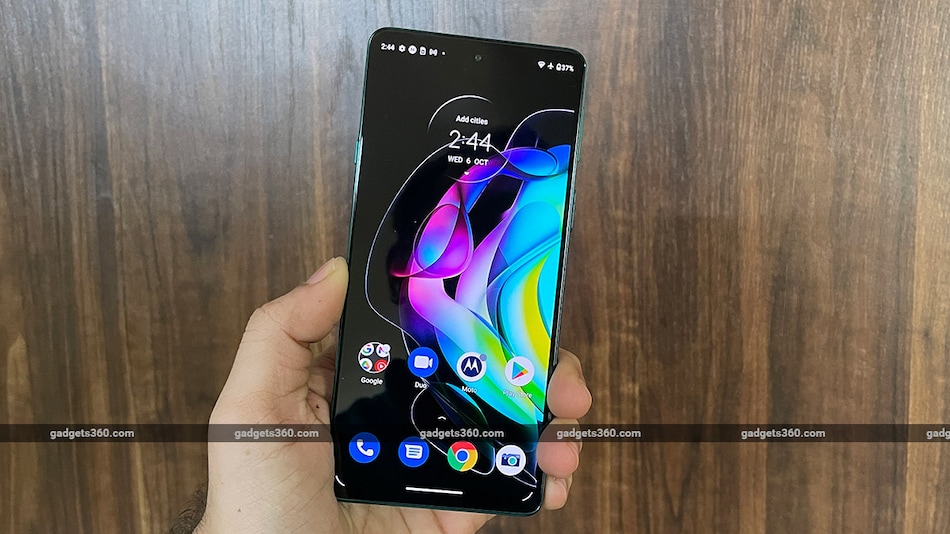 The Motorola Edge 20 is priced at Rs. 29,999 for the lone configuration, which is 8GB of RAM and 128GB of storage. You do get two colour choices, Frosted Pearl and Frosted Emerald. I had the latter for this review.

The Motorola Edge 20 feels like a chocolate bar in the hand. It is rectangular, slim, and tall. I also found it to be fairly light at 163g. The front of the Motorola Edge 20 is dominated by a 6.7-inch display with a camera hole at the top. It has thin bezels all around which give it a premium look. The frame is made of an aluminium alloy and feels sturdy to the touch. Motorola has put the power and the volume buttons on the right, with the latter being positioned slightly higher than ideal. The power button also has an integrated fingerprint scanner and has a nice clicky feel when pressed.

The camera module on the Edge 20 protrudes significantly.

On the other side of the frame is a dedicated button for Google Assistant. Just like the sides, the top and bottom of the frame are flat. While the top only has the secondary microphone, the bottom has the USB Type-C port, primary microphone, speaker, and SIM tray. The back of the Motorola Edge 20 is made out of plastic. My Frosted Emerald Motorola Edge 20 unit did pick up smudges during use. You get a transparent case in the box that you can use to avoid this.

The camera module on the Motorola Edge 20 is huge and has a three-step design. It does protrude quite a bit causing the device to rock about. The low weight of the Edge 20 makes it easy and comfortable to use, though the big display will need you to stretch your thumbs to reach the top. The Edge 20 is IP52 rated as well, which means it is splash-resistant. Motorola ships a 30W TurboPower charger in the box along with this smartphone.

Motorola has managed to pack some interesting hardware into the slim body of the Edge 20. Let's start right from the top, the 6.7-inch AMOLED display with full-HD+ resolution and a 144Hz refresh rate. Motorola also claims a 576Hz peak touch sampling rate for this panel. You get Corning Gorilla Glass 3 to help keep the panel safe. The display is HDR10+ certified and has support for DC dimming*.

Powering the Motorola Edge 20 is the Qualcomm Snapdragon 778G SoC. There's 8GB of LPDDR4 RAM and 128GB of UFS 2.2 storage. The Edge 20 is among a few recent smartphones in India to launch with this processor. It has support for multiple 5G bands. There is also Bluetooth 5.2, Wi-Fi 6e, NFC, and six satellite navigation systems. The Edge 20 packs in a 4,000mAh battery. It supports fast charging and comes with a 30W TurboPower charger in the box.

The Edge 20 is sleek and light

Motorola ships the Edge 20 with Android 11, with its MyUX interface on top. My review unit was running the September Android security patch which is recent. The UI has very minor changes and is very similar to stock Android. Motorola lets you customise icons, fonts and even accent colours to suit your liking. Moto Gestures let you quickly perform certain actions, for example you can double-chop to turn the flashlight on or swipe with three fingers to capture a screenshot. You'll find Facebook (can be uninstalled) and apps by Google preinstalled. I did not notice any spammy notifications during the review period.

The Motorola Edge 20 delivered good performance, and the Snapdragon 778G SoC did not give me any reason to complain. I did not encounter long load times or face issues while multitasking. Motorola has set the display refresh rate to Auto by default but you can lock it at 60Hz or 144Hz. At the higher refresh rate, the phone feelsis noticeably smoother while scrolling. The AMOLED display has good viewing angles and you can tweak the colour output. I didn't fiddle with this as I liked the saturated profile it had out of the box. The single bottom-firing speaker is loud, but I found it tinny at higher volumes. Unlocking the device using the side-mounted fingerprint scanner as well as face recognition was quick.

Now I was curious to see how the Snapdragon 778G SoC compares to the MediaTek Dimensity 1200, which powers several other smartphones at the same price. In AnTuTu, it managed 524,175 points which is lower than the 583,748 points scored by the OnePlus Nord 2 (Review). The Motorola Edge 20 scored 769 and 2,768 in Geekbench 5's single-core and multi-core benchmarks respectively. In GFXBench's T-Rex and Car Chase tests, the Edge 20 managed 109fps and 29fps respectively. I also ran 3DMark Slingshot on the Motorola Edge 20, and it scored 6,449 points in this test.

The side-mounted fingerprint scanner is quick to unlock the smartphone

I played Battlegrounds Mobile India (BGMI) on the Edge 20, and it defaulted to HD graphics and High frame rate. The game ran without any lag or stutter. I played this game for a round lasting 23 minutes and noticed a 6 percent drop in battery life. The Edge 20 didn't get too warm either.

Motorola's Gametime feature lets you silence incoming calls and notifications. You can add your favourite app shortcuts and even put the phone in “high performance mode” while gaming. The Acoustic Lights option lights up parts of the edge of the screen to highlight the origin of sound. In games like BGMI, this helps identify the direction from which a sound originated, potentially helping you locate opponents quicker.

The 4,000mAh battery on the Motorola Edge 20 seems like a conscious choice to keep the smartphone light and slim. While I appreciate this, a bigger battery would have been an acceptable reason to make it bulkier. This smartphone lasted me just about a day with my usage, and needed a charge the next morning. In our HD video loop test, the phone went on for 13 hours and 19 minutes, which is lower than the average. The 30W TurboPower charger got the phone to 65 percent in 30 minutes and to 94 percent in an hour.

Motorola boasts of quad-camera functionality despite the triple camera setup of the Edge 20. This phone has a 108-megapixel primary camera sensor, a 16-megapixel ultra-wide camera capable of macro shots, and an 8-megapixel 3X telephoto camera with Optical Image Stabilisation (OIS). Digital zoom goes up to 30X. For selfies, the Edge 20 has a 32-megapixel shooter that sits in the camera hole at the front. The camera app is familiar and has multiple shooting modes.

The Edge 20 has a triple camera setup

The 108-megapixel primary camera shoots 12-megapixel shots by default. I found the Edge 20 to be quick to meter scenes and it could detect what it was pointed at. In daylight, the primary camera managed shots with good details, and objects at a distance were recognisable. These photos did not have the best dynamic range, occasionally resulting in overexposed skies. HDR kicks in rather aggressively when shooting bright scenes, but darker sections still lose out on detail. Photos shot with the ultra-wide-angle camera are 12 megapixels in resolution as well. These shots had minor distortion at the edges and weren't as detailed as those taken with the primary sensor. However, the ultra-wide-angle camera did manage HDR shots well.

The 3X telephoto camera was useful for shooting faraway objects, and it managed good details. Since this camera has OIS, shots were sharp and did not have any blur caused by shakes. I also shot a few photos at 30X digital zoom, but these had a watercolour effect.

Close-up shots had good detail on zooming in, and the Edge 20 did manage a soft depth effect quite well. Portrait shots had good edge detection but colour accuracy was slightly off causing skin tones to look different. You can set the level of background blur before you take a shot. Macros were captured at the full 16-megapixel resolution by the ultra-wide-angle camera, and were quite detailed. I could go close to a subject while shooting, and the higher resolution output will allow you to magnify and crop the image if required.

Low-light photos taken with the primary camera did not have the best detail, and objects didn't appear sharp. With Night mode, the phone does improve the outcome, but also adds noise in darker portions of the frame.

Selfies taken with the 32-megapixel camera had good detail and I was able to capture good shots in daylight as well as at night. Portrait mode is also available, and the phone manages a good depth for the background.

Video recording tops out at 4K for the primary camera as well as the selfie shooter. While shooting at 1080p, the phone does let you switch between the different sensors on the go. Footage shot in daylight was stabilised at 4K as well as at 1080p. However, low-light footage recorded while walking had a noticeable shimmer.

The sub-Rs. 30,000 smartphone market is now getting crowded with 5G smartphones from almost every mainstream manufacturer. Motorola has jumped into this segment with the Edge 20 which packs in a powerful Snapdragon 778G processor. This phone is primarily focused on aesthetics, and it is slim and light, but as a result its battery requires frequent charging. If you are looking for a slim smartphone, or one running bloatware-free Android, the Motorola Edge 20 is worth considering for the price.