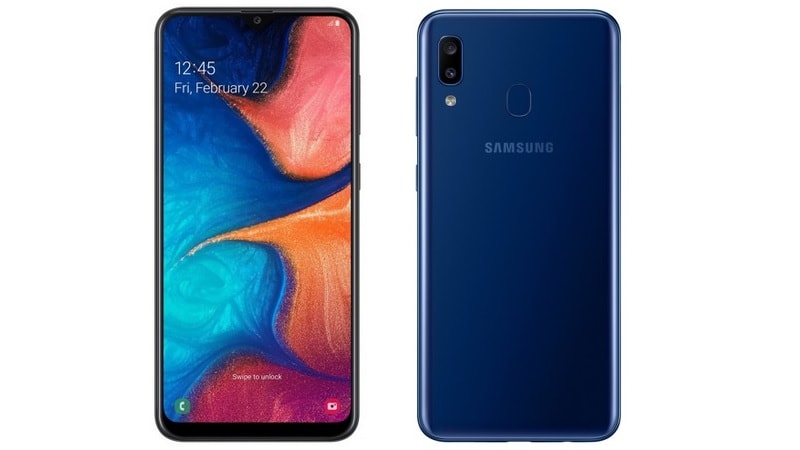 Samsung Galaxy A20 price in India

The Samsung Galaxy A20 will retail at Rs. 12,490 in the country. The phone will be offered in a single 3GB + 32GB storage variant, however there will be three colour options - Black, Blue, and Red. Samsung says the Galaxy A20 India sales will start on April 8 via Samsung Online Shop, Samsung Opera House, major online retailers, and brick-and-mortar stores.

Samsung has not announced any launch offers for the smartphone at this point.

As we mentioned earlier, Samsung Galaxy A20 was originally introduced last month in Russia.

Samsung Galaxy A20 runs on Android 9 Pie with the company's One UI. It sports a 6.4-inch HD+ (720x1560 pixels) Super AMOLED display with a waterdrop notch that follows the company's Infinity-V Display design language. The Galaxy A20 is powered by the octa-core Exynos 7884 SoC, which has two high power cores clocked at 1.6GHz and six efficiency cores with a clock speed of 1.35GHz. The Galaxy A20 will be released in a single storage configuration with 3GB of RAM and 32GB of onboard storage. The storage can be further expanded via a microSD card (up to 512GB).

Additionally, the smartphone packs a rear-mounted fingerprint sensor for biometric authentication. The Galaxy A20 comes equipped with a large 4,000mAh battery with fast charging support as well as USB Type-C port. The latest Samsung offering features a “3D Glasstic” build and measures at 158.4x74.7x7.8 mm.

Editor's note: An earlier version of this article noted the Samsung Galaxy A20 will go on sale in India from April 10. The company has since changed that date to April 8.