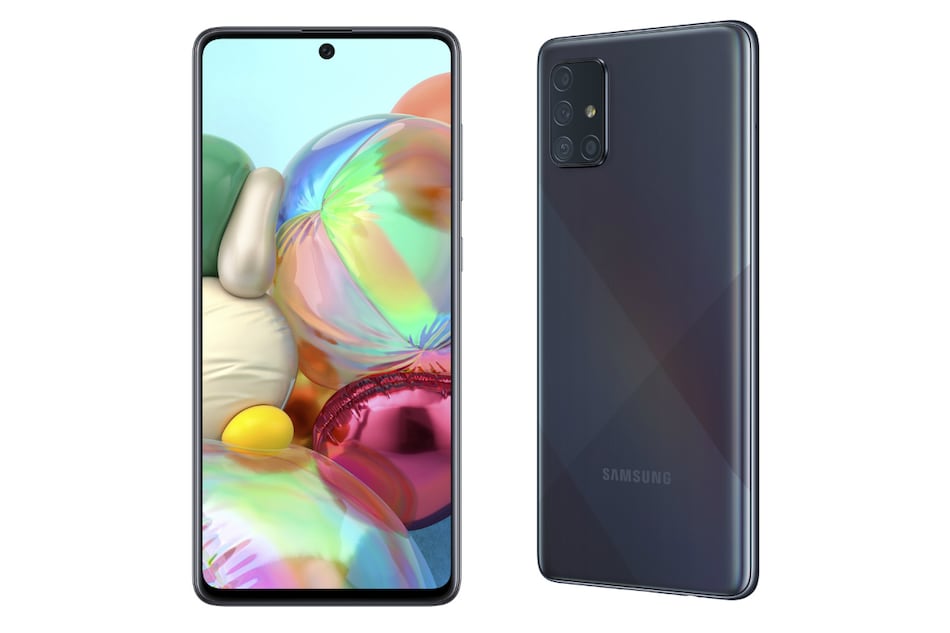 Samsung Galaxy A71 comes with an Infinity-O Display that has 20:9 aspect ratio

Samsung Galaxy A71 was launched in India on Wednesday, after being unveiled globally last year. The successor to the Galaxy A70, the new Samsung phone features an Infinity-O Display and comes with a quad rear camera setup. Samsung has also provided Android 10 on the Galaxy A71 along with its proprietary One UI. The Galaxy A71 was initially launched in Vietnam in two distinct configurations. However, the smartphone in India comes in just a single variant. The India version also includes a few features specifically for local users. The Samsung phone competes with the likes of the Vivo V17 Pro, Oppo Reno, Redmi K20 Pro, and OnePlus 7.

The Samsung Galaxy A71 price in India has been set at Rs. 29,999 for the single, 8GB RAM + 128GB storage variant. The smartphone comes in Prism Crush Black, Prism Crush Silver, and Prism Crush Blue colour variants and will go on sale starting February 24 via Samsung Opera House, Samsung.com, and leading online portals.

In terms of storage, the Samsung Galaxy A71 has 128GB of onboard storage that is expandable via microSD card (up to 512GB). Connectivity options include 4G VoLTE, Wi-Fi, Bluetooth, GPS/ A-GPS, and a USB Type-C port. The phone also has an in-display fingerprint sensor. Besides, there is a 4,500mAh battery with support for 25W fast charging.

Samsung has also provided some ‘Make in India' features on the Galaxy A71 that are designed specifically for Indian users. There are visual cards that are integrated within the text messaging app and can be in the form reminders and offers. The handset also includes multilingual typing to support local languages. The features list also includes and a quick discovery feature called Finder that lets users search for content across entertainment, e-commerce, food, and travel domains available within "popular" apps installed on the smartphone. Furthermore, there is a Smart Crop feature to let users save, share, or edit a screenshot with a single tap.

The Galaxy A71 comes preloaded with an Samsung Pay integration to enable easy payments. Lastly, there is Samsung Knox for enhanced security.