Samsung Galaxy A90 5G may be the first Galaxy A-series phone from Samsung to feature a Snapdragon 855 SoC. 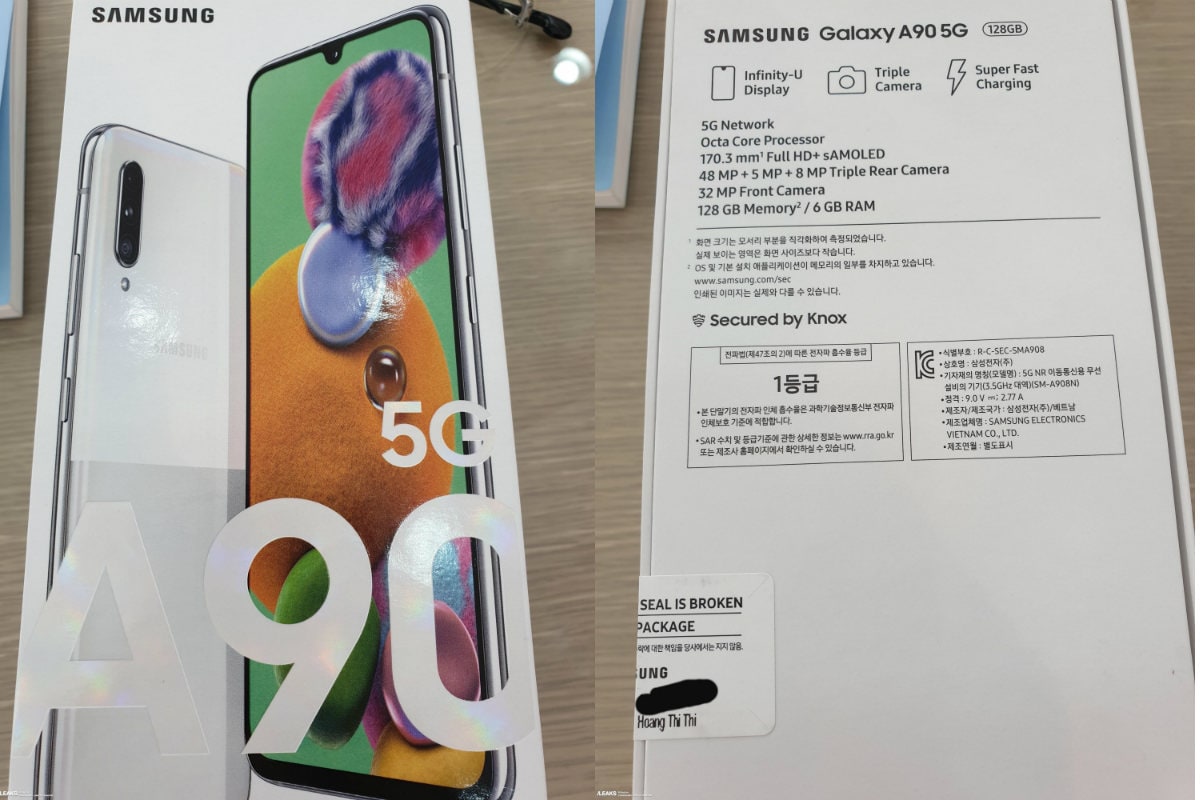 Samsung Galaxy A90 5G has been featured in a couple of leaks. While one is a retail box leak, the other is an alleged listing from the Samsung South Korea site. The alleged retail box of the Samsung Galaxy A90 5G seemingly confirms key design details and specifications of the upcoming smartphone. Separately, the Galaxy A90 5G was allegedly spotted on the Samsung Korea site, and though this listing has been taken down, a screenshot gives us some indication about the smartphone's design. Now, this phone has been in the rumour mill for quite some time now. Recently, Samsung had accidentally confirmed the existence of this smartphone, after its name popped up on the company's official website and detailed its charging specifications. Well, looking at these leaks, a Galaxy A90 launch does look pretty imminent now.

According to a report by dcinside, the front part of the leaked retail box of the Samsung Galaxy A90 5G reveals the design of the handset. Moving over to the back reveals some of the key specifications of the smartphone like a 6.7-inch full-HD+ Super AMOLED Infinity-U Display, a 48-megapixel + 5-megapixel + 8-megapixel triple rear camera setup, a 32-megapixel front camera, 6GB of RAM, 128GB of inbuilt storage, an octa-core processor that is most likely to be a Snapdragon 855, super-fast charging, and 5G network support.

As we mentioned above, apart from the retail box being leaked, a couple of days ago, an official promo slide of the Samsung Galaxy A90 5G was allegedly spotted on the Samsung South Korea site, and has since been pulled, though not before a tipster took a screenshot. The promotional image showed that the upcoming smartphone sports the model number SM-A908N and will indeed be called the Galaxy A90 5G. The image also confirmed that the upcoming smartphone will sport a traditional screen with a notch up front that holds the front camera, and a regular triple camera at the rear. Now, this is nothing fancy like a rotating camera mechanism or a full-screen display that's found on the Samsung Galaxy A80.