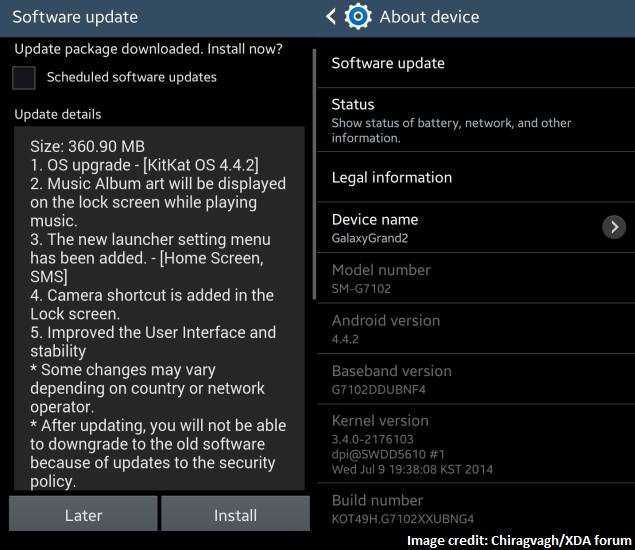 Samsung has started rolling out the Android 4.4.2 KitKat update for the Galaxy Grand 2 Duos in India. The smartphone was launched in January with Android 4.3 Jelly Bean out-of-the-box.

The Android 4.4.2 KitKat update for Samsung Galaxy Grand 2 is 361MB in size and is available over-the-air, as well as via Samsung Kies app. Users can also manually check by going to Settings > About Phone > Software update.

The update roll out was reported by a user on XDA forum, and confirmed by multiple NDTV Gadgets readers via comments. From the official change-log, the KiKat update along with improved user interface and performance enhancements, will also include album art on lock-screen, camera shortcut on lock-screen, support for emojis, new launcher settings, wireless-print support and more.

Earlier this month, a leaked update schedule acquired by an insider from Samsung India suggested that the Android KitKat update for the Samsung Galaxy Grand 2 Duos, Samsung Galaxy S4 Mini, Galaxy Mega 5.8, Galaxy Mega 6.3, and Galaxy Note 3 Neo is in final phase and will be rolled out in July.

Samsung Galaxy Grand 2 Duos is a dual-SIM device with support for GSM+GSM that is a successor to the Samsung Galaxy Grand Duos. It features a 5.2-inch HD TFT display with a resolution of 720x1280 pixels. It is powered by a 1.2GHz quad-core Qualcomm processor alongside 1.5GB of RAM. It sports an 8-megapixel autofocus rear camera with LED flash and a 1.9-megapixel front-facing camera. It comes with 8GB inbuilt storage, which is further expandable up to 64GB via microSD card.