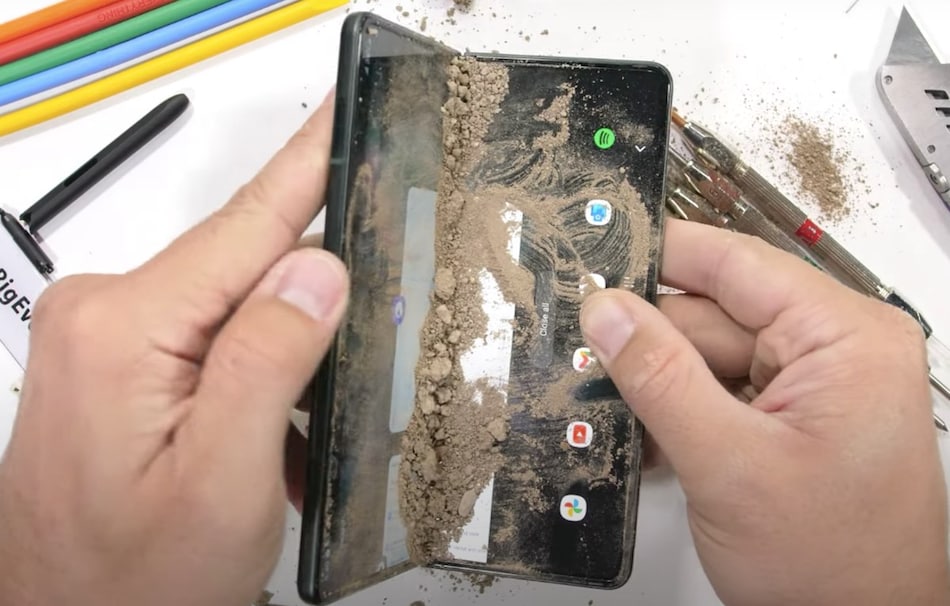 Over 11-and-a-half minutes long, the JerryRigEverything video begins with a scratch test of ​​Samsung Galaxy Z Fold 3. The narrator, Zack Nelson, shows that the cover display of the phone starts getting scratches at hardness level six of the Mohs scale and some deep grooves are visible at level seven. This is similar to how other flagship phones including iPhone 12 Pro and OnePlus 9 Pro are prone to scratches. The Galaxy Z Fold 3, however, has a Corning Gorilla Glass Victus protection on top of the cover display.

After unfolding the phone, Nelson demonstrates that Samsung Galaxy Z Fold 3 starts receiving scratches at the level two of Mohs scale and some deeper ones appear at level three. He also mentions that his fingernail was also able to leave noticeable marks on the surface.

“The display underneath the plastic might be 80 percent more durable, but it's very soft on the surface, which is just something to keep in mind,” he says in the video.

Since the folding display isn't scratch-resistant, the selfie camera that is an under-display sensor is also found to easily get scratches.

Samsung Galaxy Z Fold 3 also supports S Pen to enable drawing and handwritten notes on the foldable phone. Nelson found that the compatible S Pen is “indeed safe to use on the screen,” with leaving no marks or scratches even after applying some heavy pressure on the display.

Nelson also breaks the S Pen into two in the video to give us a glimpse of the hardware underneath that enables the digitisers on the Galaxy Z Fold 3 to work with its pressure-sensitive tip.

After testing the displays and the S Pen, Nelson moves further by starting to scratch the build of the Galaxy Z Fold 3. He notes that the chassis appears to receive scratches just like how a usual aluminium phone would get them, without any additional ruggedness.

The narrator also uses some dust to test how well Samsung Galaxy Z Fold 3 could work with tiny particles. The phone does have an IPX8 certification — just like its sibling Galaxy Z Flip 3 — but no dust resistance. This means that it could start facing issues if dust particles reach the gears powering the hinge.

Samsung last year used an internal bristle design (called sweeper) on the hinge of the Galaxy Z Fold 2 to keep the hinge gears protected from dust particles. However, it isn't clear whether a similar construction has been considered this year.

The Galaxy Z Fold 3 also carries an oleophobic coating on top of its display to resist smudges. The coating doesn't help resist scratches from the dust, though.

Nelson also put the Galaxy Z Fold 3 on a burn test and found that its folding display leaves some burn scars, but the plastic surface doesn't get any major damage.

Additionally, the JerryRigEverything video shows a bend test of the Galaxy Z Fold 3 where the phone passes all pressure, thanks to the new build. Nelson notes that while the inner display of the folding phone may not be much harder over the last year model, the phone “as a whole is for sure 80 percent stronger than it appears” on paper.

Shopee India May Be Unveiled Soon as Company Launches Recruitment Campaign for Vendors, Ramps Up Hiring