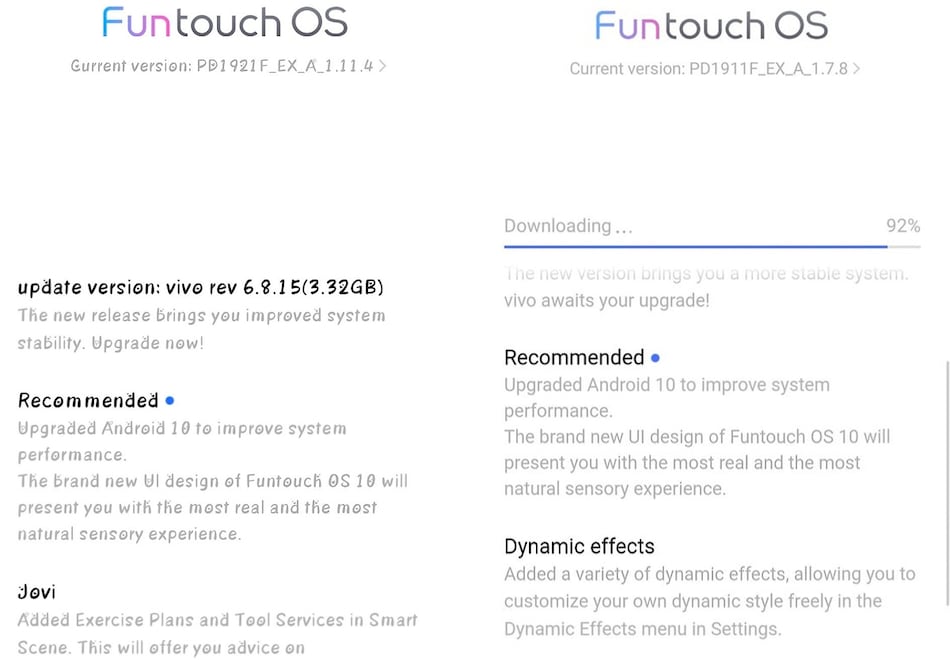 The company has confirmed the rollout of the Android 10-based Funtouch OS 10 update for Vivo Z1 Pro and Vivo Z1x users in India via Twitter. Vivo has responded to user queries for the rollout by confirming that Funtouch OS 10 update for the two phones is already ‘under the greyscale test'. This means the company has rolled it out to a few users first, and a mass rollout will begin once it is ensured that no critical bugs are present in the update. Users should get a notification for the update when it arrives on their device. You can check for the update manually by going into Settings. Vivo Z1 Pro and Vivo Z1x users in India have started sharing screenshots of receiving the update already.

These screenshots suggest that the Vivo Z1x Funtouch OS 10 update comes with version number PD1921F_EX_A_1.11.4 and the update size is at 3.32GB. The Vivo Z1 Pro Funtouch OS 10 update, on the other hand, comes with version number PD1911F_EX_A_1.7.8 and the update size for this phone is at 3.1GB. It is recommended that you download the update over a good Wi-Fi connection given its large size, and ensure that you keep your phone on charge while the installation process is underway to enable seamless installation of the update. You could opt for a ‘Night update' wherein the phone will automatically update itself while you sleep.

The Vivo Z1 Pro latest update brings improved compass functionality and a new exchange rate conversion function to help quickly convert between different currencies. In contrast, the Vivo Z1x update brings along new Jovi virtual assistant features like the addition of exercise plans and tool services in Smart Scene. It remains to be seen which other phones will get the new update.