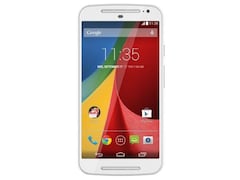 Motorola, in its new incarnation, can be credited with reshaping the lower end of the Indian smartphone market. The Moto G, when launched earlier this year, was quite simply the best possible value you could get in a smartphone. It set off a massive chain reaction with companies launching competitive models and cutting prices to stay relevant.

The original Motorola Moto G burst onto the scene and quickly became our favourite phone in its price band thanks to an unprecedented level of performance and finesse. Its successor, the aptly named Moto G (Gen 2), continues in the same vein but also brings along a healthy set of improvements, including a much-needed microSD card slot. In line with industry trends, the Moto G (Gen 2) traded its predecessor's 4.5-inch screen for a 5-inch one and as a result is a bit large and unwieldy. The software is near-stock Android, which feels fresh and clean. Our benchmark test results indicated good overall performance, camera quality and battery life. Overall, this is a solid option for value-conscious buyers.