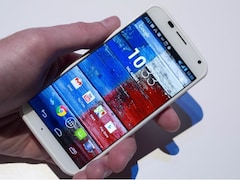 Motorola seems to be targeting the price-conscious smartphone market with a vengeance. We already know that the budget Moto G has set cash registers ringing around the world, but Motorola hasn't taken its eyes off the mid-range smartphone market either.Less than two months after the release of the Moto G, comes the company's flagship, the Moto X. The newest member of the Motorola family is squarely aimed at delivering more in terms software, camera, and design without compromising on performance.