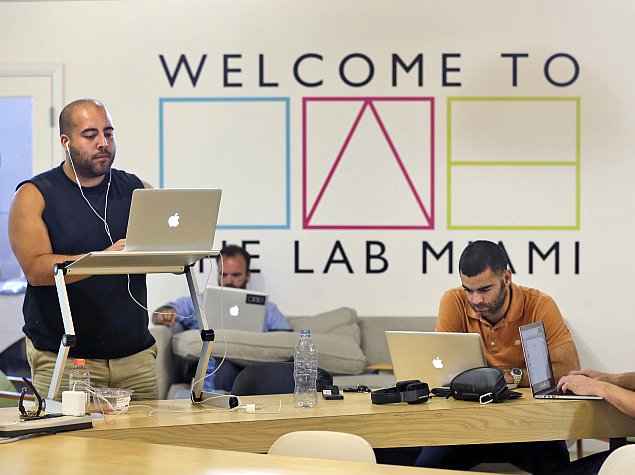 Famed for its beaches, cruises and cafecitos, South Florida is now angling to become one of the next U.S. tech hot spots by leveraging its role as the gateway to Latin America and luring northern entrepreneurs with cheap living costs and lots of sun.

The region in and around Miami has long pinned its financial fortunes on real estate and banking, but a combination of factors - the recent recession that shook those economic drivers coupled with an increase in cloud computing, the rapid growth of mobile devices in Latin America, and the area's vast health care industry - now have civic leaders and local entrepreneurs making a push to diversify into the tech industry.

"We're not trying to replicate what other tech hubs are doing. We want to complement them," said Daniel LaFuente, a 26-year-old Miami native who co-founded the new, open workspace and tech training center Lab Miami. "Miami is a place that provides its own benefits: lower costs of living, no income taxes, the proximity to Latin America and the beach."

Two years ago, the idea of a tech hub in Miami seemed a longshot to LaFuente and his partner Wifredo Fernandez. The recent University of Pennsylvania graduates had returned to their hometown but found few innovative business opportunities. So they created their own in a small room in Miami's gritty Wynwood Arts District, a place where freelance web designers and startup entrepreneurs rent space, meet and collaborate.

Much has changed in just a short time. The nonprofit John S. and James L. Knight Foundation is helping spearhead efforts draw the tech industry to Miami, committing $6 million in the last 18 month to an array of projects.

"In Miami there are enormous disconnects," Knight Foundation Program Director Matt Haggman said. "If you are an entrepreneur and you want to connect with an investor, where do you go? To date it's been you're really on your own."

On a recent evening inside the mural splashed former warehouse that now houses Lab Miami, more than 100 young professionals, tech geeks and artists roamed between a 3D printer demo on one side and a bilingual review of the latest fashion industry apps on the other. Nearby, civic minded coders huddled, tapping out ways to improve city services.

Last week, Microsoft announced the opening of its first U.S.-based technology innovation center at the new downtown entrepreneurial training center and startup Venture Hive.
"We look at Miami as a great hub for technology from the Southern U.S. perspective," said a Microsoft vice president Sanket Akerkar. "It's a great destination in and of itself, and then you add that it's a gateway to Latin America."

Manny Medina, the former owner of a data services company he sold to Verizon for $1.4 billion in 2012, is behind the tech conference eMerge Americas that kicked off Friday, mixing investors and players like IBM and Accenture with startups from across the region and Latin America, while throwing in local color in the form of rapper and entrepreneur Pitbull.

The global nonprofit Endeavor has also become a catalyst. Endeavor has long matched small companies looking to scale with its network of investors and Fortune 500 mentors in the developing world. The group founded by New York venture capitalist turned Miami transplant Peter Kellner opened its first U.S. office here last fall, also thanks in part to $2 million from Knight.

Michael McCord, co-founder of the online training platform LearnerNation, is being vetted by Endeavor.

"There's a lot of money down here in Miami, but there's not a culture of investing in tech," McCord said. He believes the nonprofit's presence and rigorous screening will improve investor confidence.

Coming to Miami was about finding the right fit, says Andres Moreno, head of OpenEnglish. Moreno launched his company in 2007 in Caracas to provide live, one-on-one English classes with native speakers via computer but says few Latin Americans were willing to invest. So he headed to Silicon Valley, sleeping months on a friend's outdoor balcony until he came away with $2 million. But by then he'd decided to move to Miami.

Silicon investors were focused on the U.S. Hispanic market, he said. They couldn't understand why Venezuelan or Colombian professionals would pay $80 a month for classes when they could download cheap language apps.

OpenEnglish has since garnered some $120 million in investments. Moreno said getting on a plane to visit the company's clients and service centers scattered throughout Latin America is far more convenient from Miami than it was from Silicon Valley.

"What I see here in the future are more tech enabled services. We may not invent the hardware technology," he said, "But we have those street smart people who understand what folks want and how to provide it."

County Commissioner Juan Zapata says local government needs to do more than cheerlead.
"What's missing is a robust public agenda," Zapata said. "What area of town do we want to draw these companies to? What educational goals? How can we draw more support for our public universities?"

But turning South Florida into a tech hub of the Americas is no overnight prospect. The region, which includes Palm Beach, Broward and Miami-Dade counties, lacks world famous universities and the critical mass of computer engineers and investors found in Silicon Valley, Boston, New York and increasingly Austin.

Toward that end, the Miami-Dade County School district recently extended Wi-Fi to all of its schools and is offering free Wi-Fi to children whose families cannot afford it. And the region's private and public universities are partnering with new institutions like Venture Hive, where the Microsoft center will be located. The Hive launched in early 2013 with a grant from the city and Miami Dade County and houses some 35 mostly tech startups from around the globe like the new Aprefis, co-founded by Romanian Lavinius Marcu, which uses big data to help cruise companies price cabins efficiently in real time.

Luring big investors to think of Miami as more than a winter escape, though, remains the challenge.

"You start by changing the mindset," Medina said. "Begin bringing people to Miami thinking technology, not thinking 'I'm going to go shopping or I'm going to put my money in the bank."
Comments