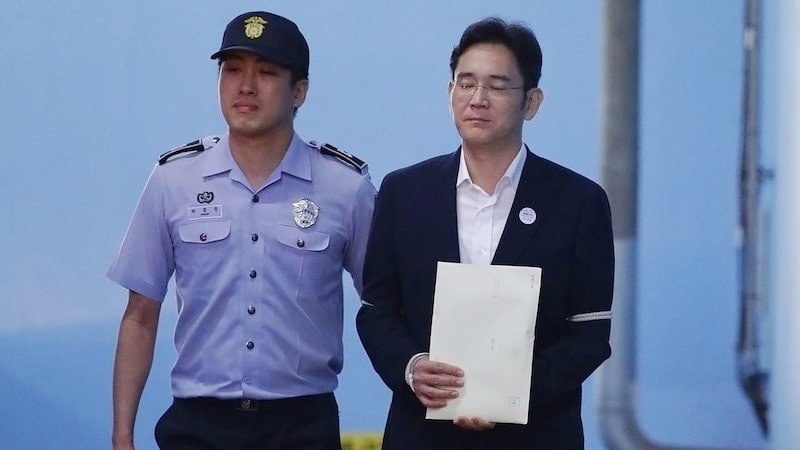 Samsung Electronics Vice Chairman Jay Y. Lee has filed an appeal against the five-year jail term he was given for bribery and other charges through his lawyer, according to the Seoul Central District Court's website on Monday.

The website did not give any details about the appeal, which will be assigned to a higher court.

The sentencing of the billionaire scion was a watershed for South Korea's decades-long economic order, which has been dominated by powerful, family-run conglomerates. Lee's lawyer has steered media inquiries to Samsung, whose spokeswoman did not have any immediate comment about the appeal against the sentence handed down on Friday. Lee, the 49-year-old heir to one of the world's biggest corporate empires, was detained in February on charges that he bribed then-president Park Geun-hye to help him secure control of the conglomerate that owns Samsung Electronics, the world's leading smartphone and chip maker.

Samsung Group also has interests ranging from drugs and home appliances to insurance and hotels.

Under Korean law, Lee can be kept in detention a maximum four months while a court considers his appeal. This means the appeals court that is assigned the case is likely to try to wrap up its ruling around January 2018, said criminal lawyers not directly involved in the case.

"I believe all of you must be devastated by the lower court ruling... We management are also distressed," he wrote in an internal message, seen by Reuters, to Samsung Electronics staff on Monday.

"Please do the best you can where you are... We management will also lead the way in overcoming the crisis with uncommon resolve," Kwon added.

"Reports from S&P and Fitch over the weekend prompted worries among foreign investors, triggering them to unload more shares today than they did on Friday," said Kim Ye-eun, a stock analyst at Cape Investment & Securities.

"The leadership vacuum may not have short-term effect, but in the long-term, it is a serious problem."

Samsung Electronics said in a statement that Lee will keep his status as a member of the firm's Board of Directors "unless there is a final determination of guilt."

Possible defence strategy
Friday's lower court ruling has several aspects that open the way for an appeal, the criminal lawyers told Reuters. Out of the KRW 43.3 billion (roughly Rs. 246 crores) originally charged by prosecutors as bribery, only KRW 8.9 billion was accepted to be bribery by the lower court.

Plus, Samsung's defense is likely to argue against the lower court's interpretation that giving financial support to Park's confidant Choi Soon-sil is "effectively the same as Park herself receiving it," the lawyers said.

"Samsung is likely to argue that Lee is not guilty as Samsung's support of Choi-backed ventures is not the same as giving bribes to the president," said one of the lawyers, Byun Hwan-bong.

"At the same time, as a precautionary strategy, they're likely to try to bring down the sentencing due to extenuating circumstances - Lee could not reasonably refuse the demands of the country's highest decision-maker," Byun added.

If the defence successfully argues such points, there is a chance that it can not only get Lee's sentence brought down to three years or less but also get it suspended, allowing his release, these lawyers said.