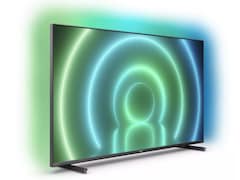 Televisions tend to be more about the core functionality and less about the design and other aesthetics but every once in a while, we'll see something flashy and pleasantly over-the-top. One such concept is Philips' Ambilight technology, which interestingly and rather astoundingly, adds to the viewing experience particularly in dark rooms where the LED lights at the back of the TV can really shine. Philips' latest television in India brings back the concept in a big way, and at a much more accessible price than before.