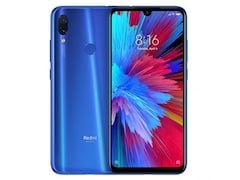 Redmi Y3 is in for review, and we put it through its paces to see if it can hold up against the competition. The Redmi series has been immensely popular for Xiaomi, so much so that the company is now positioning ‘Redmi' as a sub-brand, similar to the way it introduced its Poco sub-brand for enthusiasts. The company recently launched the Redmi Y3 and Redmi 7 (Review) smartphones in India as replacements for the Redmi Y2 (Review) and Redmi 6 (Review) respectively. Xiaomi introduced the Y-series a couple of years ago targeted at the youth and selfie lovers, and the latest iteration boasts of a 32-megapixel selfie camera, which seems quite impressive for a phone that costs Rs. 9,999. However, the Redmi Y3 does have a more immediate problem to deal with first. You see, its base price is exactly the same as that of Xiaomi's own Redmi Note 7 (Review) and the Asus Zenfone Max Pro M2 (Review) — two phones that offer vastly superior specifications compared to the Redmi Y3.

The Redmi Y3 is the selfie-focused smartphone from Xiaomi, with a 32-megapixel front camera. The phone's ‘Aura Prism' design looks striking but the glossy finish on the back and sides means it does attract fingerprints and smudges very easily. The 6.26-inch display only has an HD+ resolution so images and text don't look their sharpest when viewed beside a phone with a similar sized full-HD+ panel. There's also face recognition, which isn't as quick as the solution offered by Realme, but still works well.

The Redmi Y3 is powered by the Qualcomm Snapdragon 632 SoC, with multiple RAM and storage variants. With regular activities such as using chat apps, streaming music, and using Google Maps for directions, the Redmi Y3 handled itself quite well.

Starting with selfies, the Redmi Y3 captures detailed selfies when shooting at the full sensor resolution and when combining four pixels into one. Selfies shot with the Redmi Y3 were sharper and more detailed, and overall more appealing in low light when compared to those taken by competition. The rear cameras do an okay job but not as good as other phones in the segment.

The 4000mAh battery fared well in our battery loop test and in real world usage, we easily managed a day and a half (at times, a bit more) on one charge.

Xiaomi Redmi Y3 price in India starts from ₹ 8,849. The lowest price of Xiaomi Redmi Y3 is ₹ 8,849 at Flipkart on 7th February 2023. This Phone is available in 1 other variant like 4GB RAM + 64GB Storage with colour options like Bold Red, Elegant Blue, and Prime Black.