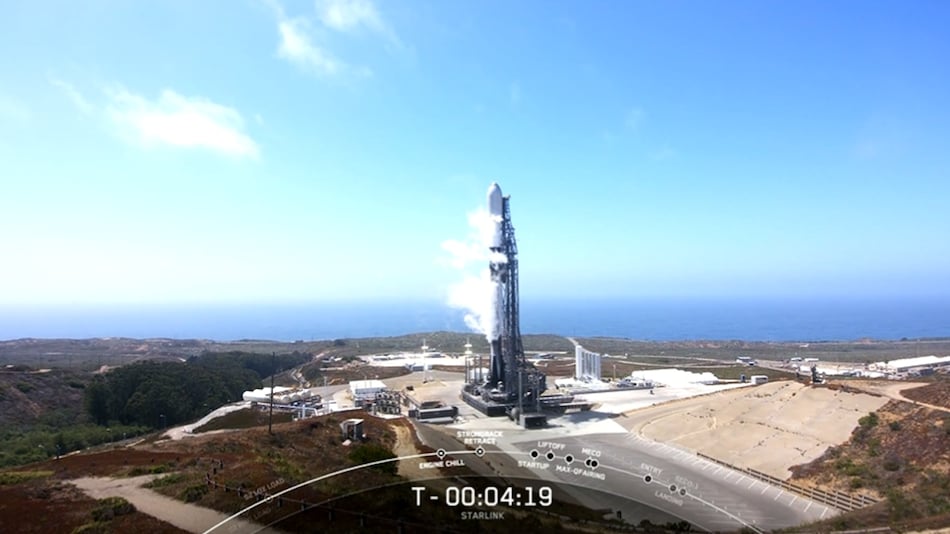 Nine minutes after the launch, rocket first landed over a drone ship in the Pacific Ocean

Billionaire tycoon Elon Musk-led SpaceX launched another batch of Starlink satellites into orbit on Friday.Taking to his official Twitter account, Musk, the founder of American spacecraft manufacturer, and satellite communications corporation SpaceX shared the details about the new satellite launch.

Nine minutes after the launch, the rocket first landed over a drone ship in the Pacific Ocean and it was liftoff in a short time. The second stage was expected to deploy the satellites 63 minutes after launch after the livestream concluded.

The new satellites are part of Group 3, which orbits in a shell that might be prone to debris "squalls" from a Russian anti-satellite test that took place in November last year, according to SpaceNews report.

A space-tracking company COMSPOC recently revealed a conjunction squall event, in which the 841 Starlink satellites representing about 30 percent of the SpaceX constellation are affected by 6,000 close approaches.

A conjunction, by COMSPOC standards, is defined as two orbiting objects being within 6 miles (10 kilometres) of each other. SpaceX hasn't commented on whether any Starlinks were affected, but in past discussions about space junk, the company has emphasized that its satellites can manoeuvre to dodge close-approaching spacecraft or debris.

COMSPOC stated in a report that, Group 3 of Starlink's five layers spacecraft are in a similar orbit to other sun-synchronous satellites that have come close to the Russian ASAT debris before.

Group 3 is at an inclination of 97.6 degrees and at an altitude of 347 miles (560 kilometres), according to Teslarati.

SpaceX has already sent two other Group 3 collections into orbit, on July 10 and July 22, both from Vandenberg.

SpaceX's 36th launch of 2022 added to its ever-growing record for launches in a year. The company also concluded its 62nd consecutive landing of a first stage, and a 34th reflight of a booster in 2022.

Friday's flight was the 10th for this particular Falcon 9 first stage, according to reports, it was a SpaceX mission.