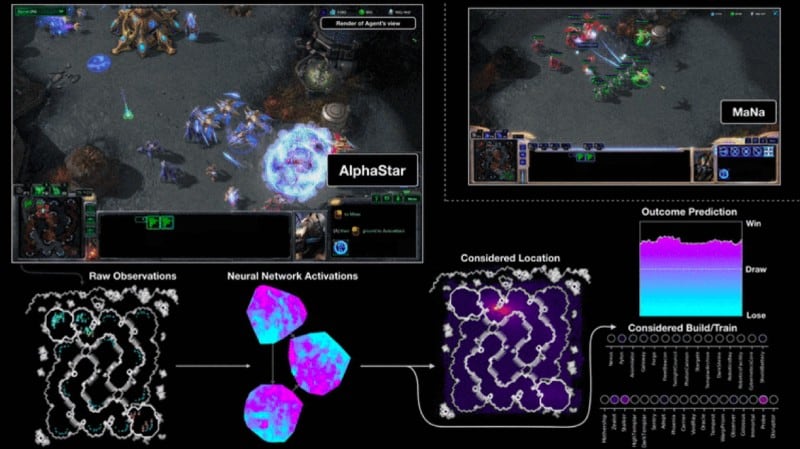 AlphaStar, an AI bot created by AI research company DeepMind specifically to play the popular esports game Starcraft II, defeated two professional human players by a staggering margin in its first real-world demonstration. In a series of eleven matches, a human was only able to win once.  The one match in which a human won was played with slightly different variables that prevented Alphastar from seeing the entire game map, which it could in all the other matches because it interacted directly with the game engine rather than through the on-screen interface. Human players cannot see the entire map during the game. DeepMind has not published details of how exactly the AI bot works, but it says that a peer reviewed paper will be released soon.

The experiment was performed with human players Dario Wünsch, known professionally as TLO, and Grzegorz Komincz, who plays as MaNa, both of Team Liquid. They took on the AlphaStar AI in five matches, each using a competitive ladder map under professional match conditions, and lost all of them. Each time, a slightly different version of AlphaStar was used, in order to see how different training and strategies would work. These ten matches were played over the course of a few weeks, and not all were broadcast during the demonstration.

MaNa then played one more match with a prototype branch of AlphaStar live during the demonstration and was able to win. This particular branch used a camera interface similar to what humans see, rather than being aware of the entire map as with the previous rounds. It was also trained for only seven days.

Quoted in DeepMind's exhaustive blog post about the demonstration, TLO said “AlphaStar takes well-known strategies and turns them on their head. The agent demonstrated strategies I hadn't thought of before, which means there may still be new ways of playing the game that we haven't fully explored yet.” MaNa later said “I've realised how much my gameplay relies on forcing mistakes and being able to exploit human reactions, so this has put the game in a whole new light for me. We're all excited to see what comes next.”

DeepMind has been training AlphaStar since late 2016, in partnership with Blizzard Entertainment, the studio behind the StarCraft franchise. The main AI challenges are being able to track multiple friendly and enemy units, plan moves well ahead of time, account for resources and defensive tactics, and adapt to the opponent's playing style across a large map in real time. The company took this on because it represents a huge challenge, following the success of its AlphaGo AI which demonstrated decisive victories at the board game Go, as StarCraft II is considered one of today's most challenging real-time strategy games.

AlphaStar has over 200 years of cumulative playing experience under its belt, and was trained by observing real-life matches and then playing against the game's own bots. Later in its development, multiple versions of the AlphaGo bot were made to play against each other in order to understand their experiences.

AI research firm DeepMind was bought by Google in 2014 and is now a separate company under the Alphabet umbrella. used several of Google's Tensor Processing Units to train AlphaStar, but once that was done, it was able to run on a single GPU to play its matches. According to DeepMind researchers, the AI is somewhat slower than human players in terms of the speed of actions per minute it can perform, but its accuracy is much higher and reaction time is much better.