Two teenage girls, who are receiving training at SPACE India private institute, discovered an asteroid which is presently near Mars. 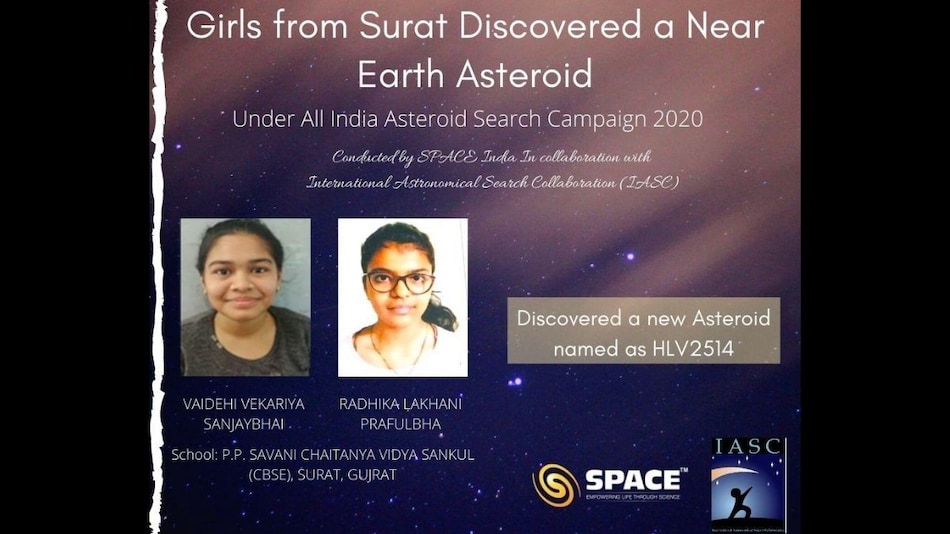 The two girls hail from Surat

Two teenage girls from India have discovered an Earth-bound asteroid by poring through images from a University of Hawaii telescope, an Indian space education institute said on Monday.

The asteroid is presently near Mars and its orbit is expected to cross that of Earth in about one million years' time, said SPACE India, a private institute where the two 14-year-old girls received training.

DISCOVERY ALERT!
We are proud to announce VAIDEHI VEKARIYA SANJAYBHAI and RADHIKA LAKHANI PRAFULBHAI, two students of P.P. SAVANI CHAITANYA VIDYA SANKUL (CBSE) from Surat with the help of SPACE-AIASC discovered a new Asteroid which is a Near-Earth Object named HLV2514. pic.twitter.com/HXpOvrwxNY

"I look forward to... when we will get a chance to name the asteroid," said Vaidehi Vekariya, who added that she wants to become an astronaut when she is older.

The asteroid, currently called HLV2514, may be officially christened only after NASA confirms its orbit, a SPACE India spokeswoman said.

Radhika Lakhani, the other student, said she was working hard on her education. "I don't even have a TV at home, so that I can concentrate on my studies."

Asteroids and comets pose a potential threat to Earth, and scientists discover thousands of them each year. In 2013, an asteroid heavier than the Eiffel Tower exploded over central Russia, leaving more than 1,000 people injured from its shockwave.

The two girls, who hail from Surat, discovered the object as part of an asteroid search campaign conducted by SPACE India along with the International Astronomical Search Collaboration (IASC), a NASA-affiliated citizen scientist group.

IASC Director J Patrick Miller confirmed the discovery, according to an email from him to the girls seen by Reuters.

The girls used specialised software to analyse the images snapped by the Pan-STARRS telescope in Hawaii, and made the discovery in June, SPACE India said.

The institute is among the few private space education initiatives in India, a country known for championing low-cost space technology that has spurred missions to the moon and Mars.