The wobbling jet explains the longstanding mystery of why gamma ray bursts blink and shows that these bursts are even rarer than previously thought. 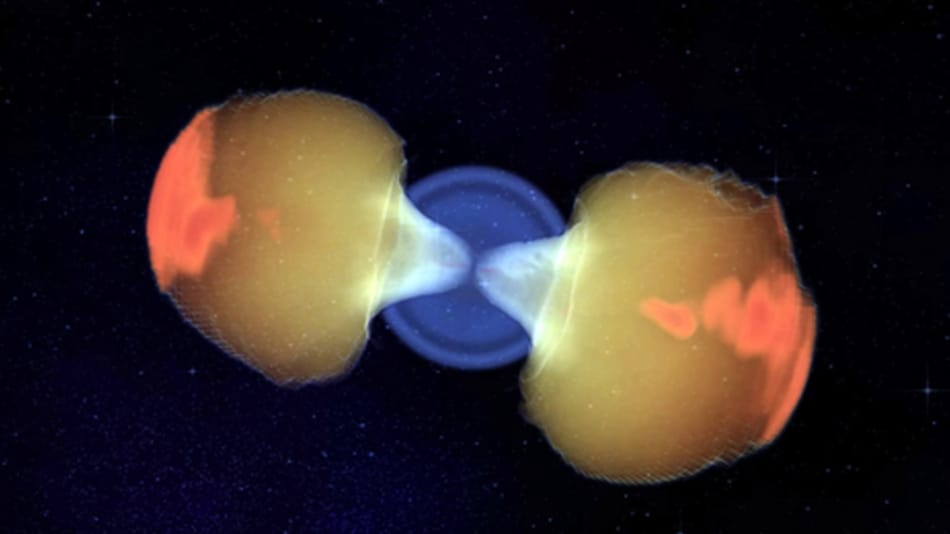 The simulations have shed light on these peculiar, intense bursts of light

Astrophysicists have developed the first 3D simulation of the entire evolution of a jet from its birth by a rotating black hole to its emission far from the collapsing star.

Simulation shows that as the star collapses, its material falls on the disk that swirls around the black hole. This falling material tilts the disk, and, in turn, tilts the jet, which wobbles as it struggles to return to its original trajectory.

The wobbling jet explains the longstanding mystery of why Gamma-ray Bursts blink and shows that these bursts are even rarer than previously thought.

Because these jets generate Gamma-ray Bursts (GRBs) — the most energetic and luminous events in the universe since the Big Bang — the simulations have shed light on these peculiar, intense bursts of light. Their new findings include an explanation for the longstanding question of why GRBs are mysteriously punctuated by quiet moments — blinking between powerful emissions and an eerily quiet stillness. The new simulation also shows that GRBs are even rarer than previously thought.

The new study was published on June 29 in Astrophysical Journal Letters. It marks the first full 3D simulation of the entire evolution of a jet — from its birth near the black hole to its emission after escaping from the collapsing star. The new model also is the highest-ever resolution simulation of a large-scale jet.

"These jets are the most powerful events in the universe," said Northwestern University's Ore Gottlieb, who led the study. "Previous studies have tried to understand how they work, but those studies were limited by computational power and had to include many assumptions. We were able to model the entire evolution of the jet from the very beginning — from its birth by a black hole — without assuming anything about the jet's structure. We followed the jet from the black hole all the way to the emission site and found processes that have been overlooked in previous studies."

Gottlieb is a Rothschild Fellow in Northwestern's Center for Interdisciplinary Exploration and Research in Astrophysics (CIERA). He coauthored the paper with CIERA member Sasha Tchekhovskoy, an assistant professor of physics and astronomy at Northwestern's Weinberg College of Arts and Sciences.

The most luminous phenomenon in the universe, GRBs emerge when the core of a massive star collapses under its own gravity to form a black hole. As gas falls into the rotating black hole, it energises — launching a jet into the collapsing star. The jet punches the star until finally escaping from it, accelerating at speeds close to the speed of light. After breaking free from the star, the jet generates a bright GRB.

Due to the enormity of this scale, previous simulations have been unable to model the full evolution of the jet's birth and subsequent journey. Using assumptions, all previous studies found that the jet propagates along one axis and never deviates from that axis.

But Gottlieb's simulation showed something very different. As the star collapses into a black hole, material from that star falls onto the disk of magnetised gas that swirls around the black hole. The falling material causes the disk to tilt, which, in turn, tilts the jet. As the jet struggles to realign with its original trajectory, it wobbles inside the collapsar.

This wobbling provides a new explanation for why GRBs blink. During the quiet moments, the jet doesn't stop — its emission beams away from Earth, so telescopes simply cannot observe it.

"Emission from GRBs is always irregular," Gottlieb said. "We see spikes in emission and then a quiescent time that lasts for a few seconds or more. The entire duration of a GRB is about one minute, so these quiescent times are a non-negligible fraction of the total duration. Previous models were not able to explain where these quiescent times were coming from. This wobbling naturally gives an explanation to that phenomenon. We observe the jet when its pointing at us. But when the jet wobbles to point away from us, we cannot see its emission. This is part of Einstein's theory of relativity."

These wobbly jets also provide new insights into the rate and nature of GRBs. Although previous studies estimated that about 1 percent of collapsars produce GRBs, Gottlieb believes that GRBs are actually much rarer.

If the jet were constrained to moving along one axis, then it would only cover a thin slice of the sky — limiting the likelihood of observing it. But the wobbly nature of the jet means that astrophysicists can observe GRBs at different orientations, increasing the likelihood of spotting them. According to Gottlieb's calculations, GRBs are 10 times more observable than previously thought, which means that astrophysicists are missing 10 times fewer GRBs than previously thought.

"The idea is that we observe GRBs on the sky in a certain rate, and we want to learn about the true rate of GRBs in the universe," Gottlieb explained. "The observed and true rates are different because we can only see the GRBs that are pointing at us. That means we need to assume something about the angle that these jets cover on the sky, in order to infer the true rate of GRBs. That is, what fraction of GRBs we are missing. Wobbling increases the number of detectable GRBs, so the correction from the observed to true rate is smaller. If we miss fewer GRBs, then there are fewer GRBs overall in the sky."

If this is true, Gottlieb posits, then most of the jets either fail to be launched at all or never succeed in escaping from the collapsar to produce a GRB. Instead, they remain buried inside.

The new simulations also revealed that some of the magnetic energy in the jets partially converts to thermal energy. This suggests that the jet has a hybrid composition of magnetic and thermal energies, which produce the GRB. In a major step forward in understanding the mechanisms that power GRBs, this is the first time researchers have inferred the jet composition of GRBs at the time of emission.

"Studying jets enables us to 'see' what happens deep inside the star as it collapses," Gottlieb said. "Otherwise, it's difficult to learn what happens in a collapsed star because light cannot escape from the stellar interior. But we can learn from the jet emission — the history of the jet and the information that it carries from the systems that launch them."

The major advance of the new simulation partially lies in its computational power. Using the code "H-AMR" on supercomputers at the Oak Ridge Leadership Computing Facility in Oak Ridge, Tennessee, the researchers developed the new simulation, which uses graphical processing units (GPUs) instead of central processing units (CPUs). Extremely efficient at manipulating computer graphics and image processing, GPUs accelerate the creation of images on a display.