Aura Air Purifier Review: Could Have Been Smarter

The Aura Air Purifier interestingly does not have a power button, and is meant to be used in an always-on mode. 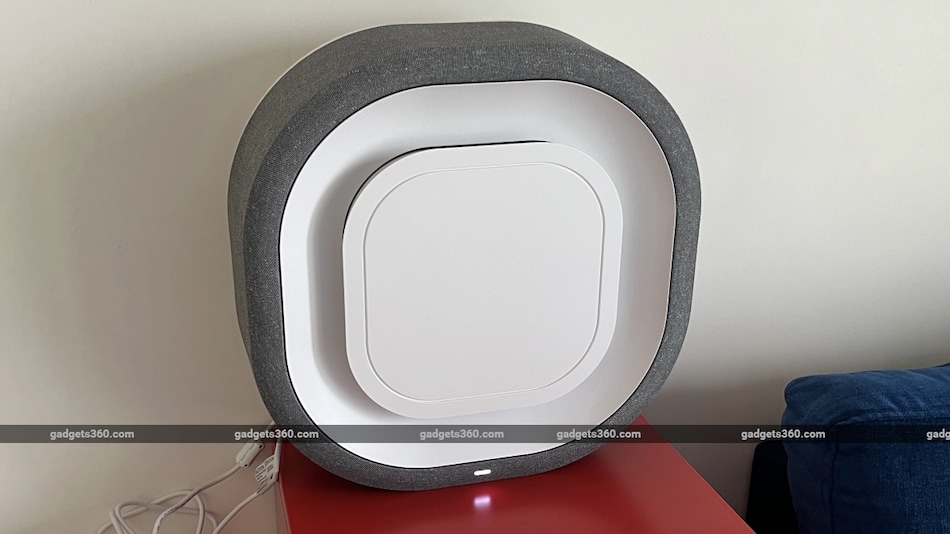 An air purifier is a niche but rather useful device for a number of reasons. Buyers in India are now warming up to the idea of having an air purifier at home, and various brands offer products in this segment, including big names such as Dyson, Philips, Samsung, and Xiaomi. Throwing its hat into this ring is Aura, a new company that claims to be a specialist in the air purification space, and the product I'm reviewing here is the Aura Air Purifier.

Priced at Rs. 37,500 in India, the Aura Air Purifier promises a combination of simplicity and modern convenience. With smart connectivity through an app, voice assistant integration, and a promise of superior air purification, is the Aura Air Purifier the best high-end air purifier you can buy right now? Find out in this review.

The Aura Air Purifier can be wall-mounted, unlike most floor-standing air purifiers currently available in India

Most high-end air purifiers are built as a ‘tower' or floor-standing form, so the Aura Air Purifier stands out for its wall-mounting design. The included screw hooks let you conveniently hang the air purifier on a wall, thereby saving precious floor space. That said, you don't have to wall-mount the Aura Air Purifier; it can be used standing upright with the fan facing outwards, and can therefore be placed on any tabletop.

The Aura Air Purifier is expectedly quite large, with the electronic and electrical components at the back of the device, and the removable and replaceable air filter at the front. The back panel has a grille design which serves to allow clean air to ‘exhaust' out the back after going through the air filter.

Interestingly, the device has just a single, and rather hard to locate, button that is used to reset the device when needed. There are no other buttons to control power or fan speed on the Aura Air Purifier itself; when connected to a power outlet and turned on, the device is always running and can only be turned off by switching off the power from the main outlet. You can use the app to adjust the fan speed, though.

The front of the air purifier has a cover over the fan itself, but with room along the edges to effectively pull in air. There is also a small light at the bottom, which indicates power and connectivity status.

Included in the sales package of the Aura Air Purifier is the power adapter and cable which connects to the back of the main device, and the screws and anchors to wall-mount it. The filter system (which is said to be using technology patented by Aura) comes pre-fitted, and has four elements of air purification — a pre-filter, the main HEPA Ray filter, an air ioniser, and ultra-violet LEDs to kill bacteria and viruses. A new filter is included with the purchase, and replacement filters are priced at Rs. 5,000 each.

The Aura Air Purifier has a companion app called Aura Air (available on Android and iOS), but this app offers very little by way of control over the functions of the air purifier. Instead, it's more of a resource for information regarding the device's activity and effectiveness. The air purifier functions in ‘always-on' mode when receiving power, and the only way to power it down is to shut off the main power switch or unplug the device, which can be a bit bothersome.

The only major thing about the Aura Air Purifier that you can control is the device mode, which essentially governs the speed of the fan the noise it generates. You can also set a schedule for Night Mode, which will have the air purifier operate more silently. If you keep it in ‘Auto' mode, it will adjust the fan speed according to detected indoor air quality.

There are also controls for the LED status light, and the ability to reset the filter's day count manually when you install a new air filter. Aura states that a brand new filter is good for up to 180 days of continuous use. The app supports setting up and viewing statistics for multiple Aura devices across multiple locations as well.

The Aura Air app is available for iOS and Android, and provides insights into indoor and outdoor air quality

Various integrations are available, including Google Assistant, Amazon Alexa, Siri, and more. The functions offered by these integrations vary, with some offering controls over the power modes, and others providing details and information on air quality through voice prompts. The Alexa and Siri integrations worked as expected, but didn't add much by way of functionality; I preferred using the app to view information or change power modes.

Keeping you informed of air quality is really the key function of the Aura Air app. This includes indoor and outdoor air quality measured by AQI (the latter requires location permission to fetch the information for your location from the Internet), and detailed daily and weekly charts for various specific air quality levels as measured by the device.

This includes sensors for AQI, carbon monoxide, carbon dioxide, volatile organic compounds, PM10 and PM2.5 levels, humidity, and temperature. The charts are easy to understand, and the app itself worked fairly smoothly on iOS.

The benefits and functionality of an air purifier can only truly be measured by how you feel, and most air purifier makers recommend running the devices continuously to truly feel the effects. The Aura Air Purifier adopts a simplistic approach that almost seems to force you to run it all the time; there is no power switch, and power supply to the device will automatically turn it on and activate it.

Unlike the similarly-priced Dyson Purifier Cool, the Aura Air Purifier has no air blowing capabilities that allow it to work like a floor-mounted fan. Instead, air is purified by the filter from the front and blown out the sides, which seemingly ensures better inflow and outflow volumes.

The results are displayed in the app, which showed a noticeable improvement in air quality in my living room in just 10 minutes. Setting the Aura Air Purifier to ‘Auto' mode was ideal, as it adjusted its operation depending on the air quality in the room. That said, it was often quite noisy when it the air had many impurities, but it slowed down and got a bit more silent after a while.

The Ray filter is expected to be useful for around 180 days, after which it will need to be replaced

The night mode ensured that the Aura Air Purifier ran silently, and this of course meant that it took a bit longer to bring air quality levels up to code. If operating through the day and with the windows and doors to other rooms kept closed, the device was able to maintain decent air quality levels throughout the day, while operating silently.

Open windows obviously caused the device to work harder, and it's usually recommended to turn an air purifier off when windows are open. However, the always-on power mode of the Aura Air Purifier suggests that you're meant to let it operate even if windows and room doors are open, but do note that this could cause the Ray filter to be replaced more often that expected.

As for the quality of air purification, it's difficult to say just how effective the Aura Air Purifier was for me, but the air did feel cleaner indoors on days when I ran the air purifier as compared to days when it was switched off. The air quality charts generated by the Aura Air app showed marked progress and improvement in air quality both in the short and long term, and varying conditions in the room usually reflected as expected on the charts.

The Aura Air Purifier looks good, offers seemingly good air purification, and is very easy to use. However, it falls a bit short when it comes to smart functionality and the ability to set it up and use it to your liking. The simplified approach might sound good in theory, but the lack of a power button and detailed controls feel a bit strange in practice.

Furthermore, the Aura Air Purifier seems a bit expensive for what's on offer, with even the price of replacement filters coming across as a bit too high. It might perhaps appeal to those looking for a wall-mountable air purifier with decent performance, but competing options from brands such as Dyson, Philips, and Samsung are a bit more appealing in the premium segment.