The Kent home security camera works with the Kent CamEye app available on iOS and Android. 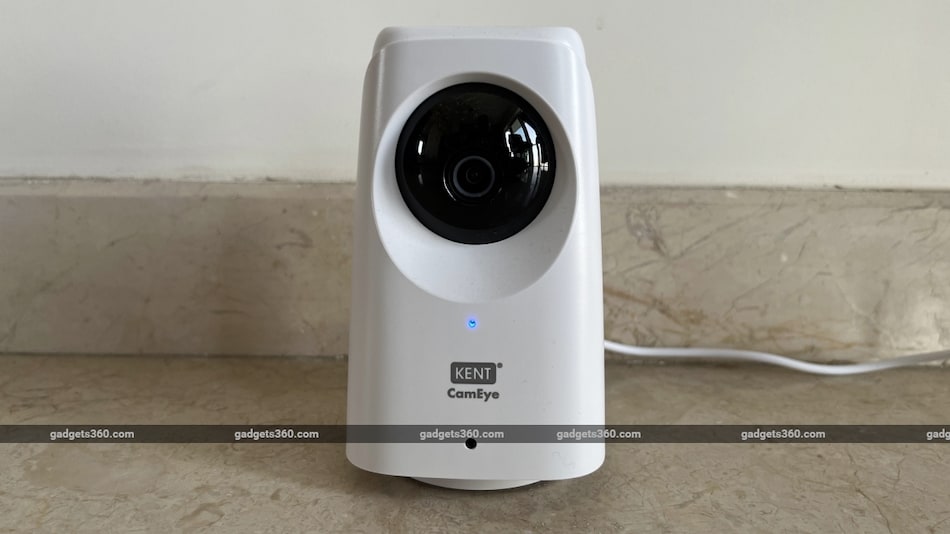 Kent might be best known in India for its range of water purifiers, but the company also sells a diverse set of products across various home appliance segments, including kitchen appliances, air purifiers, vacuum cleaners, and security cameras. Talking specifically about the company's camera products, Kent has a small range which includes security and monitoring cameras for cars as well as a Wi-Fi-enabled model for homes. The Kent CamEye HomeCam 360 Wi-Fi Security Camera is the product I'm reviewing here, and it is priced at Rs. 2,999 in India.

Much like the Godrej Spotlight Pan-Tilt Home Security Camera, which I had reviewed earlier, the Kent CamEye HomeCam 360 is meant for your home, and promises quick and convenient access to a video feed using Wi-Fi connectivity and a dedicated app. You can also adjust the camera angle to look all around your home for more flexibility, and there are many other features worth talking about, which I'll elaborate on in this review. Is this the best low-cost home security camera you can buy right now? Read on to find out.

The Kent CamEye HomeCam 360 competes directly with the Godrej Spotlight Pan-Tilt camera, and offers a similar range of vision and features. However, its design is considerably different. The camera sits within a ball-like module that allows it camera to look up and down, and the entire plastic casing can rotate on a fixed base.

The Kent CamEye Home Cam 360 has a microphone and speaker, both of which are on the back of the device. This allows the camera to not only pick up audio along with the video feed, but also enables two-way communication, alert chimes, and an intruder alarm feature. The front of the camera has a status LED which indicates its power and connectivity states.

The bottom of the Kent HomeCam 360 is rubberised, and the camera rotates on this fixed base

The Kent CamEye HomeCam 360 has a fixed base with a rubberised surface for grip, and the rest of the camera's body rotates on that base. A socket on the underside allows you to mount this camera on a tripod, wall, or ceiling. No kit or bracket for mounting is included in the box and one will have to be purchased separately. In the sales package, you get a wall adapter and a USB Type-A to Micro-USB cable to power the security camera.

On the base, you'll find the Micro-USB port for power, and a MicroSD card slot that supports up to 128GB capacity cards. The device has a 2-megapixel camera sensor with support for up to full-HD video recording. The camera has a horizontal rotation range of 350 degrees and a vertical rotation range of 65 degrees. The field of view is specified as 120 degrees horizontally and 95 degrees vertically. There are six infrared LEDs to enable visibility in darkness. The camera connects to the Internet using only 2.4GHz Wi-Fi, and the 5GHz band is not supported.

As with other Wi-Fi-enabled home security cameras, the Kent CamEye HomeCam 360 works with an app that allows users to monitor the video feed, control the camera, access stored footage, and more. The Kent CamEye app is available for iOS and Android, and I used the former platform to test the features and functionality offered by the app. If you have multiple Kent CamEye cameras, they can all be controlled and monitored together.

Once you've registered and created an account through the app, you'll be able to link the security camera and get it connected to your home Wi-Fi connection. After this, tapping on the camera icon will take you to its video feed, and you'll be able to adjust the camera angle and settings, activate the speaker and microphone (either simultaneously or separately), take a snapshot to save to your smartphone, and more.

The app is very easy to use, and has most options and functions in convenient places. For instance, you can easily activate two-way communication or take snapshots with a single tap. The D-pad to adjust the camera angle is also directly accessible, and it usually took just two to three seconds to activate the camera and show the video feed.

Going deeper into the menus and settings lets you enable privacy mode, in which the camera does not activate itself or record footage. You can also access your saved recordings and images, and look at a list of alerts generated by the camera based on motion or noise detection parameters. Usefully, the alert sensitivity is customisable. Turning on all settings generated dozens of alerts per day when the camera was placed in front of my main door, so it's nice to have this kind of control over the various functions.

The Kent CamEye app controls the camera, and lets you view the live feed or stored footage

The Kent CamEye HomeCam 360 can upload its footage, particularly event-triggered video clips, to the company's own cloud platform. This is a premium feature and prices for storage space start at Rs. 150 per month or Rs. 1,500 per year. You can store up to seven days' worth of video clips triggered by some event, and these clips are around 12 seconds long. The paid tiers go up to Rs. 400 per month or Rs. 4,000 per year to store up to 30 days' of video history. A one-month subscription is included with each purchase.

I was able to use the one-month plan for this review, and it allowed me to store and view older footage from the cloud. Even after the plan expired, I was able to view some clips within the app, and download them to my smartphone.

As per the information on Kent's website, a paid subscription allows you to capture event-triggered recordings which are saved to the cloud, and also play them back directly from the cloud. However, all other functionality, including memory card recording and playback, live streaming of the video feed in real time, two-way communication, and privacy mode are available even if you aren't subscribed to a paid plan.

It's possible to link the Kent CamEye HomeCam 360 to your Amazon Alexa account through a skill, which then lets you access the video feed from within the Alexa app or on an Alexa-enabled smart display such as the Amazon Echo Show 10 (3rd Gen). This worked well for me, but I wasn't able to adjust the camera angle when using the Alexa link.

An important factor in the functioning of any home security camera is reliability; you need the device to work when you need it. The Kent CamEye HomeCam 360 worked reliably for me on my 2.4GHz Wi-Fi connection. I was able to get it up and running in a matter of seconds whenever I needed it, and the app is well designed, putting important features within easy reach.

The Kent CamEye HomeCam 360 records a full-HD video feed, which shows in full colour during the day, and in monochrome when it's dark. The security camera is able to automatically detect low-light conditions and activate the infrared LEDs as required, and this worked reliably for me with most details and faces identifiable despite the lack of colour in the feed. There were some occasions on which the camera took a couple of seconds to react to lighting changes and recalibrate the video feed, but this wasn't really much trouble.

The Kent HomeCam 360 has a speaker and microphone for two-way communication, which can be activated through the app

Full-HD footage captured by the Kent CamEye HomeCam 360 was sharp and detailed in most conditions if movement was occasional and slow, but quick movements did cause some artefacts. This wasn't really a problem as there was still plenty of detail to be seen in faces, clothing, and small items such as boxes and packages.

You can, of course, reduce the resolution to HD or SD if necessary, which might make the stream more stable and detailed with slower Internet connections, or if you need more hours of footage to be recorded onto a storage card. This largely tended to affect the legibility of text on items such as boxes and packages, but faces were still recognisable even at SD resolution.

The camera angle can be adjusted across a wide range. With 350 degrees of panning, it's possible to look almost all around where the camera is placed. The 65 degrees of tilt range combined with the wide viewing angles of the camera itself allow for plenty of flexibility. Although the camera took about a second to react to commands from the app to adjust its angle, movement was easy and precise for the most part.

The speaker on the Kent CamEye HomeCam 360 is loud, getting quite noisy and at its loudest when I activated the siren mode. The chimes were also loud enough to be heard from different parts of my home, and two-way communication was clear and convenient when standing near the camera. The microphone picked up a lot of ambient sound, but was able to more precisely capture speech when someone was talking near the device. Usefully, you can activate only the microphone without the speaker if needed.

The camera suitably captures video clips of human movement when it's set to detect this, but it cannot track a moving object or person. Saved clips were still clear enough to recognise faces and objects though.

A good Wi-Fi security camera is a simple and efficient way to set up a home monitoring system, and the Kent CamEye HomeCam 360 is a decent option to consider for this. Although this device faces strong competition from products such as the Godrej Spotlight Pan-Tilt camera and Mi Home Security Camera 360, Kent's offering sets the benchmark by offering a good all-round experience with no significant flaws.

With a good companion app, useful features such as two-way communication, a paid subscription cloud storage option for event-triggered video clips, and reliable performance, this is among the better basic Wi-Fi security cameras you can buy right now. It's well priced, and is definitely worth considering for your home security needs.