The 10.1-inch screen of the Amazon Echo Show 10 moves around to face you, and can track your movements too. 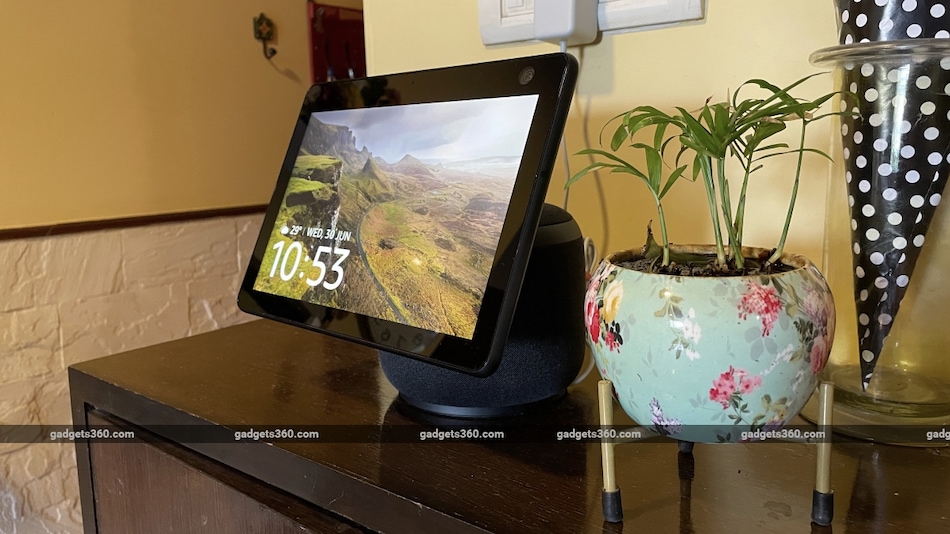 Amazon's Echo range of smart speakers is popular for its simplicity, ease of setup and use, and of course, the ability to access information and audio-based content through voice commands. However, in my opinion, the Echo Show range is far more impressive, and deserves a lot more attention for adding visual cues and display-based capabilities to the range. While there have been a few Echo Show products already, the latest is the company's most expensive and technologically impressive one yet.

Priced at Rs. 24,999, the Amazon Echo Show 10 (3rd Gen) is now the biggest model in the product family . Like the rest of the range, the Echo Show 10 is a smart display and smart speaker in one, with a 10.1-inch screen and a three-driver speaker system on the base. However, the device has a unique party trick – its screen rotates mechanically to face you, letting you clearly see what's being displayed from anywhere in the device's peripheral range of vision.

While this might sound impressive, how does it fare in practice? I've put the Amazon Echo Show 10 (3rd Gen) through several tests to see just how well this unique smart device works, and here's my review.

While earlier Echo Show devices have been single-piece units with a screen at the front and a speaker system at the back, the Amazon Echo Show 10 (3rd Gen) changes things around quite radically. This device is essentially two separate parts; the speaker system and other hardware is in the base unit, while the 10.1-inch 1280x800-pixel screen is fixed to the top of it. This gives the impression of them being two separate units, despite being firmly attached together.

The screen can be manually tilted upwards or downwards for easier viewing and camera orientation, depending on the height at which the Amazon Echo Show 10 (3rd Gen) is placed. The bottom of the base unit is motorised, allowing it to rotate in a full circle to face in any direction. The power socket for the included adapter is at the bottom of the device, with a small gap for the cable to pass through, which leaves the rotating mechanism unhindered.

There's no power switch; when plugged in, the Echo Show 10 is always on. This is a large smart display and speaker meant for use at home, and therefore needs to be plugged into a wall power outlet at all times – there's no battery.

Although the Amazon Echo Show 10 (3rd Gen) can rotate 360 degrees to face any direction, you'll have to ensure that it's placed with enough clearance to move around unhindered, such as on a coffee table or kitchen counter. Naturally, it won't be able to do a full circle in some positions, such as against a wall or with objects placed right next to it.

There are buttons for volume and disabling the microphones, along with a slider to physically cover the 13-megapixel camera

It's possible to adjust the range of motion so the speaker knows when to stop turning; this can be done through the motion settings, and is easy enough to configure. You can also set an idle position, which is the default direction that the Echo Show 10 will face when in standby. It's also worth pointing out that motion and tracking relies on good light, so the rotation mechanism is disabled in dark or poorly lit rooms.

The Amazon Echo Show 10 (3rd Gen) has two 1-inch tweeters and a single 3-inch woofer for sound, all built into its fabric-wrapped base. The 10.1-inch touch screen has wide borders all around, with the 13-megapixel camera in the top-right corner just above the screen. There are buttons at the top to adjust the volume and mute the far-field microphones, along with a sliding shutter that physically blocks the camera for privacy as needed. This isn't a very high-resolution screen, but it's sharp and clean enough for basic viewing, and serves the purpose of showing Alexa's visual cues well enough.

The brain of the Amazon Echo Show 10 (3rd Gen) is Alexa, Amazon's constantly evolving voice assistant. While voice commands and responses are the key feature of Alexa, the screen on the Echo Show 10 provides visual prompts, hints, and some basic video content to support interactions. You'll see album art and track details, weather reports with icons and data, images and text related to searches, and more. You can also use voice commands to play video content from YouTube (which plays through the built-in browser) or Amazon Prime Video.

You can independently visit websites through the browser, or even access Netflix natively on the device. The Echo Show 10 (3rd Gen) is a capable smart display, providing more visual content than competing devices from other brands. Alexa's ever-improving skills and capabilities as well as language capabilities now comprehensively extend to Hindi language commands in addition to English.

The camera also means that the Amazon Echo Show 10 (3rd Gen) is a capable device for video calls, using Alexa's native video chat feature to let you communicate with family and friends who are logged in to the Alexa app on their smartphones or have Echo devices with video chat capabilities.

Additionally, you can also ‘drop in' to your own home from anywhere through the Alexa app logged in to your account on your smartphone; this worked well to quickly talk to family members at home or even monitor the house remotely. Other communication features such as announcements and voice calls are also available, and you can set the screen to serve as a digital photo frame for your pictures as well.

The speaker and other hardware are built into the base unit of the Amazon Echo Show 10 (3rd Gen), while the screen is a separate but attached component

Like before, you can stream music through linked services such as Amazon Music, Spotify, Apple Music, and JioSaavn; control linked smart appliances such as light bulbs, air purifiers, and cleaning robots; fetch information from the Web; use household tools such as timers, recipes, and shopping lists; and activate various skills that allow Alexa to interact with content and brands.

Alexa itself is now able to understand more voice commands and work more skills than before, and generally offers an increasingly smooth experience. All of the Echo Show 10 (3rd Gen)'s features, including remote monitoring, communications, and basic settings, can be controlled through the Alexa app for iOS and Android. The app also allows for the configuration of smart home appliances and other Echo and Fire TV products, as well as letting the Echo Show 10 seamlessly integrate with your existing smart home setup.

All of this is suitably supported by the screen motion features; the device rotates to face you based on where your voice commands come from, and was also able to follow my gaze fairly accurately when I was watching video content or on video calls. While you might consider this signature feature of the Echo Show 10 to be unnecessary and gimmicky, I found it to work quite well and made using the screen of the device much more convenient. This is a unique feature as far as smart devices go, and definitely made for an interesting user experience.

The smart features and display-based capabilities of the Amazon Echo Show 10 (3rd Gen) are impressive, but this device is a smart speaker at its core. Even so, sound quality on the speaker isn't quite as impressive as the price might suggest. That's not to say the Echo Show 10 sounds bad; it's reasonably good considering its size and form factor, but doesn't quite match up to our current top pick, the Rs. 7,999 Google Nest Audio.

Much of this has to do with the fact that the screen and the unique rotating mechanism are the centrepieces of the Amazon Echo Show 10 (3rd Gen). Although powered by three drivers – two tweeters and a woofer – the screen itself seemed to block and muffle sound a bit, making for a somewhat odd listening experience even at moderate volumes. At high volumes, I found the sound just a bit shrill and unpleasant, while it was decent at low volumes when within five feet of the speaker. Over longer distances, such as across a room or even off to the sides of the speaker, the sound was a bit awkward.

While the soft and pleasant tunes of children's music – particularly tracks by kids' artist Blippi – did sound decent, the electronic jazz track Forces… Darling by Koop felt a bit dull when far away from the speaker, with the quick beats sounding a bit muffled. The price and specifications might suggest that this is a capable smart speaker in terms of sound quality, but it is best used in small spaces for a single listener, rather than considered a capable option for a large space.

I found that creating a bit of space all around the speaker did improve the sound a bit by allowing it more room to breathe, per se, but placement for such a large device is a tricky thing and you might not have that luxury in certain situations. Users looking for better sound quality will be better served by the Google Nest Audio or Amazon Echo Studio; sound quality is definitely not the Echo Show 10's strong point.

The idea of a combined smart display and speaker isn't new, but the Amazon Echo Show 10 (3rd Gen) pushes the boundaries of what you can expect from this segment, albeit at a premium price. Its ability to turn to face you, follow you around, and ensure that you have a clear view of the screen from practically anywhere in its field of vision makes using it a unique experience. Although a bit gimmicky, the feature lends itself well to the visual experience, and is a pretty good look into the future of smart displays.

However, at Rs. 24,999, this is an expensive device, and seems particularly so when you consider that sound quality is below average and bested by more affordable options. If those are key considerations, you might want to consider the Google Nest Audio instead, as it offers the full smart experience (minus the display, of course). The Amazon Echo Show 10 (3rd Gen) is worth considering for its excellent display-based features, the continuously-improving Alexa voice assistant, and the futuristic experience of having the screen follow your gaze.