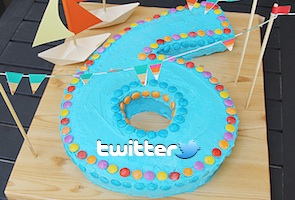 Highlights
When a company called Obvious was working on a new micro-blogging platform back in 2006, little would they've known that this platform would one day play a key role in preserving freedom of speech in several countries.

Twitter has come to represent many things to many people. While some get high on "mentions" by their favourite celebrities, others have used it to for more serious roles like organizing protests against authoritarian regimes. When a few tried to pin the blame for London riots on Twitter, others used Twitter to organize cleanup activities in the riot affected neighbourhoods.

As Twitter turns six, we take a look at some key stats that have made the Twitter story such an engrossing one.

2. The record for maximum tweets per second as of date is 25,088, set during screening of Japanese movie "Castle in the Sky" in December 2011. (Source: Twitter)

On Dec 9, the television screening in Japan of Hayao Miyazaki's "Castle in the Sky" led to 25,088 Tweets per second - a new Twitter record.

3. Twitter is the 9th most popular site in the world. (Source: Alexa)

5. It took 3 years, 2 months and 1 day to hit the first billion tweets. It now takes less than 3 days to clock that many.

7. The most popular Indian on Twitter as of date is none other than Amitabh Bachchan (@srbachchan) with over 2.3 million followers.

8. The most prolific user on Twitter is @Yougakudan_00, a 21-year Japanese boy who enjoys "anime/ manga, gaming and programming", who has over 36 million tweets to his credit! That beats the next user by the small matter of 30 million tweets! (Source: Twitter Counter)

RT for a good cause. Each retweet sends 50c to help kids in foster care. #TreatItFwd

10. Twitter is now available in 28 different languages around the world with Arabic, Farsi, Hebrew and Urdu being the latest languages added.
Comments