Instagram's Amber Alerts has started rolling out in the US on June 2 and will be fully available in 25 countries in the coming weeks. 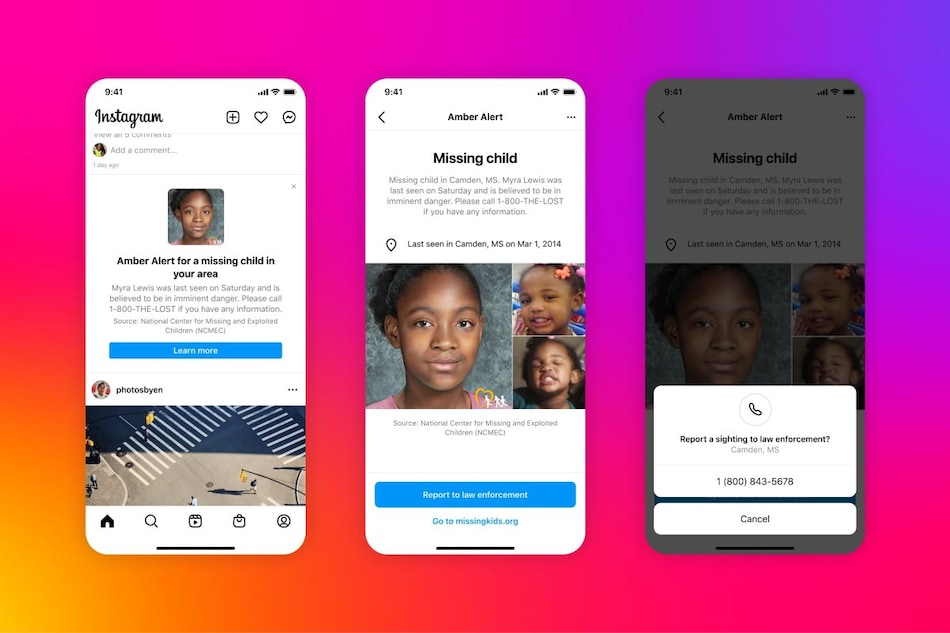 Instagram is launching Amber Alerts on the social media platform to help find missing children. Amber alerts were introduced on Facebook in 2015. The feature started rolling out in the US on June 2 and will be fully available in 25 countries in the coming weeks. The alert will include important details about the child such as a photo, description, and location of the abduction among other details. Instagram recently announced '1 Minute Music' tracks that bring a collection of songs and videos that can be used in making Reels and Stories on the platform.

The Amber Alerts introduced by Instagram will allow people to see and share notices of missing children in their area. This feature was developed in partnership with organisations like the National Center for Missing & Exploited Children (NCMEC) in the US, the International Centre for Missing & Exploited Children, the National Crime Agency in the UK, the Attorney General's Office in Mexico, the Australian Federal Police, and others.

With the latest update, if an Amber Alert is activated by law enforcement and you are in the designated search area, the alert will automatically appear on your Instagram feed.

As mentioned earlier, Amber Alerts on Instagram started rolling out from June 1, and will be fully available in the coming weeks in 25 countries including Argentina, Australia, Belgium, Bulgaria, Canada, Ecuador, Greece, Guatemala, Ireland, Jamaica, Korea, Lithuania, Luxembourg, Malaysia, Malta, Mexico, the Netherlands, New Zealand, Romania, South Africa, Taiwan, Ukraine, the UK, the United Arab Emirates, and the US. There is no information as to when the feature will be available in India.

Amber Alerts have been available on Facebook since 2015 and have helped in hundreds of successful child endangerment cases in the US and around the world.

Instagram also recently announced '1 Minute Music' tracks that bring a collection of songs and videos that can be used in making Reels and Stories on the platform. The Meta-owned app has claimed that this latest '1 Minute Music' track collection comprises music from over 200 Indian musicians, including Dhvani Bhanushali, Neeti Mohan, Shaan, Himanshi Khurana, Aniruth, and GV Prakaash Kumar. The music collection is going to make Instagram content more entertaining and will inspire other artists to release their 1-minute music videos on the platform, according to the company.