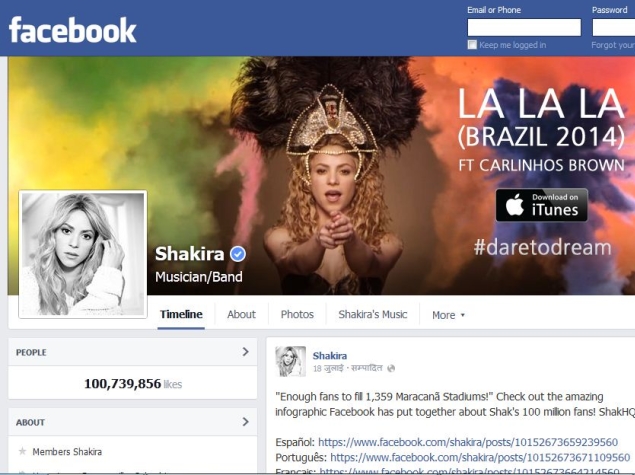 Colombian pop star Shakira has become the first person to reach more than 100 million fans on Facebook, becoming the most "liked" celebrity on the social network in the process.

The multi-lingual singer, who recently performed at the closing ceremony of the 2014 Brazil World Cup, stands ahead of rivals Eminem and Rihanna, who have amassed 91.9 million and 89 million fans respectively.

The number of fans a person has on Facebook is measured by how many people have chosen to "like" their page and follow updates from it.

Shakira was particularly active on the social network during the World Cup, sharing a host of pictures from behind the scenes.

Among them was a photograph of her standing on the field at the Maracana Stadium in Rio with a football at her feet, her most popular post on the site with more than 3.5 million "likes".

She performed her World Cup-themed "La la la (Brazil 2014)" at the closing ceremony on July 13.

In a statement posted on her Facebook page, Shakira said she was "honoured and humbled" to have reached the milestone.

"Social media and specifically Facebook has helped myself and other artists bridge the gap between the stage and the audience," she said.

Facebook founder and chief executive Mark Zuckerberg congratulated Shakira in a comment on her page. "Congrats! What an amazing milestone for an amazing person," he wrote.

Shakira's Facebook page is frequently updated with pictures and videos of her performing on stage, or at home with her boyfriend, Spanish national footballer Gerard Pique, and their son Milan.

She has had a number of global hits such as the 2006 "Hips Don't Lie" and has been a goodwill ambassador for the UN children's agency, UNICEF, since 2003.

Ten years after its creation, Facebook has more than one billion users worldwide.
Comments