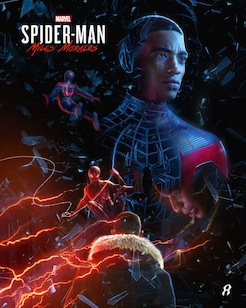 Miles Morales was a tiny part of Marvel's Spider-Man — the 2018 award-winning and best-selling PlayStation 4 exclusive — but he shot to global popularity later that year as the lead of Spider-Man: Into the Spider-Verse, with the animated film interrupting Disney and Pixar's dominance to win an Oscar. Those two aspects combine to deliver Marvel's Spider-Man: Miles Morales — also from Insomniac, with Brian Horton and Cameron Christian as creative and game directors, respectively — a video game spin-off that continues the story of the titular character. But it has very few original ideas of its own, and it's more than happy to stand on the shoulders of giants, drawing elements off both its Spider-Man game predecessor and the Spider-Verse movie.