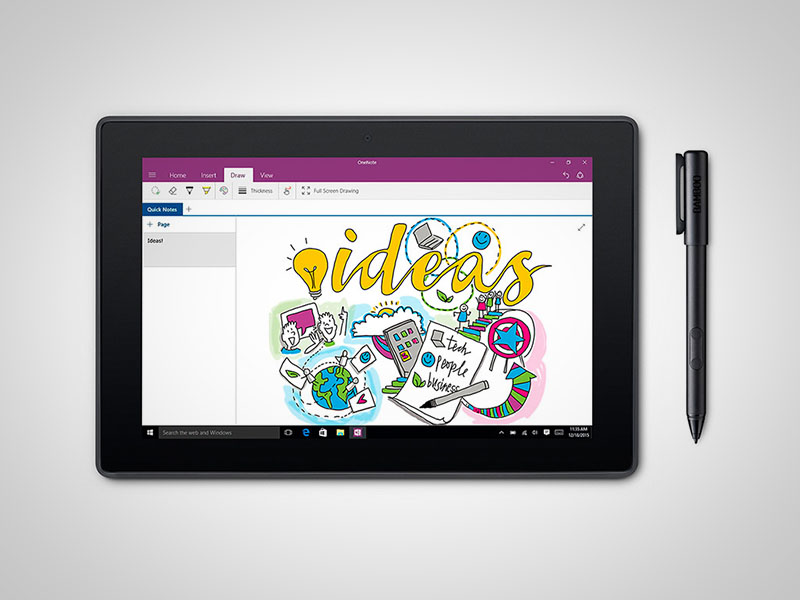 Wacom has a new smart stylus it will be displaying at CES 2016 in Las Vegas. Adding to its popular Bamboo Smart lineup, the new pen-like input will work on a hand-picked bunch of Windows 2-in-1 devices which have Active Electro-Static (AES) technology.

"Not only are we opening up digital note-taking and ideation to a new set of laptop and tablet users, but we are also providing a way for users to think differently and explore new ways to communicate and collaborate," senior VP for Wacom's consumer product business unit Mike Gay said in a statement.

The Japanese company says that owners will be able to jot down notes or draw "just like they would with pen and paper". The new smart stylus is built on three decades of Wacom innovation with digital pen input.

It seems Wacom wasn't too impressed with the top button on the Surface Pen, and has instead opted for just two - similar to ones found on the latter - but different in that they can be programmed as per your wishes, be it a right or double-click. It will need a AAAA battery to run, but you won't need to bother with another one for a year if used for three hours a day.

The new Bamboo Smart for Windows 2-in-1 devices will work directly - without pairing - with the Dell Venue 10 or Pro 10, HP Elite x2 1021, Lenovo ThinkPad P40 Yoga, and Toshiba DynaPad N72. That's because only those devices natively support AES tech.

The Bamboo Smart for Windows will arrive on shelves in the US in February, but no pricing has been provided. Meanwhile, Wacom's Bamboo Smart for certain Samsung smartphones and tablets, which was announced back in September last year, is now available for purchase for $39.95 (approximately Rs. 2,700).

The company has also updated its Bamboo Spark app, which now offers handwriting to pixel-text conversion in 13 languages such as English, Spanish and French among others. And if you've been waiting to see the Bamboo Paper on your Android device, you're in luck - the app is now live.