What makes this television so affordable, and is it worth the price? Find out in this review. 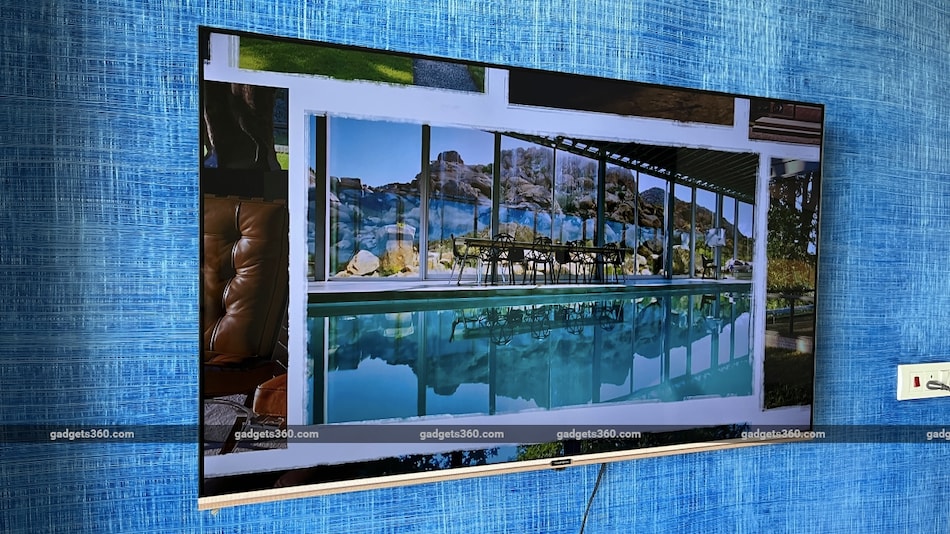 The past few months have seen major, long overdue price corrections in the television segment in India, with most models now costing a fair bit more than they did in 2020. You could expect to buy a well-specced 55-inch Ultra-HD TV for under Rs. 40,000 not so long ago, but it's hard to find such deals anymore since many popular brands including Xiaomi, Hisense, and Vu now have prices starting at around the Rs. 45,000 mark for a 55-inch LED TV. Naturally, this new 55-inch Ultra-HD TV from Thomson priced at under Rs. 40,000 caught my attention.

Although sold under the Thomson brand, the 55-inch Oath Pro Max (55OPMAX9055) is manufactured and marketed in India by Noida-based Super Plastronics Private Ltd., an original equipment manufacturer that also sells TVs under the Kodak, Blaupunkt, and Westinghouse brands. Priced at Rs. 36,999 on Flipkart, the Thomson 55OPMAX9055 has an Ultra-HD screen and HDR support, and runs on the Android TV operating system. Is this the best value-for-money big screen TV you can buy right now? Find out in this review.

The Thomson Oath Pro Max 55-inch TV checks all the boxes when it comes to specifications, with an Ultra-HD LED screen and HDR10+ support

Practically every 55-inch television today shares a basic set of specifications, including an Ultra-HD (3840x2160 pixels) 60Hz screen, support for HDR content, and smart connectivity. The Thomson Oath Pro Max TV offers exactly this, with support for up to the HDR10+ format on its IPS panel. It misses out on the Dolby Vision format which is popular on other affordable options from brands such as Redmi, Xiaomi, and Vu.

In many ways, this Thomson TV is like any other television of its size in the low-cost category that you can buy right now. It has slim borders around the screen, reasonable thickness, and the ability to be mounted on stands or a wall. What does stand out about the design is a prominent rose gold strip below the screen which has a grille-like texture, the Thomson logo, the infrared receiver, and a status indicator. The speakers are bottom-firing, with a rated output of 40W.

Two stands for table mounting as well as a wall-mount kit are included in the box, with Flipkart offering free delivery and installation of this TV. While I'm reviewing the 55-inch variant, this TV is available in other sizes – the 43-inch and 50-inch variants are priced at Rs. 27,999 and Rs. 34,999, respectively.

The power input socket faces to the right, while the ports face to the left of the TV and were a bit hard for me to reach after it was wall-mounted. Connectivity on the Thomson TV includes three HDMI ports (one supports eARC), two USB ports, an Ethernet port, an optical audio output, an antenna socket, and a composite AV input that is meant to be used with an included three-to-one adapter.

Notably, there is no 3.5mm socket for wired audio output (despite being mentioned in the specifications), but you can connect Bluetooth headphones or speakers to this TV. Strangely, the port layout on my review unit was completely different from what was shown in the images on this TV's official listing on Flipkart.

Powering the TV is a quad-core Mediatek processor, with 2GB of RAM and 8GB of internal storage for apps and app data. It's rated for 500nits of peak brightness, and supports the Dolby Audio and DTS TruSurround audio formats. Disappointingly, it only supports 2.4GHz Wi-Fi connectivity.

Although the design of the television itself is a bit adventurous, the Thomson Oath Pro Max 55-inch TV comes with an excellent remote. It's well-equipped in terms of buttons and controls, feels good to hold, and looks good too. Important buttons such as the D-pad and home key are white to help you spot them even in a dark room, and there are dedicated shortcut buttons for Netflix, Amazon Prime Video, YouTube, and Google Play.

As is usually the case with Android TV-powered televisions, the Thomson TV supports Google Assistant, with a button to invoke it and microphone to take voice commands on the remote. This worked as expected, with Google Assistant being able to fetch content on the TV as well as answer general questions, among other things.

The remote of this Thomson TV is well designed and has useful controls for most functions, including an 'i' button that pulls up resolution and connection information

The Thomson Oath Pro Max TV also expectedly has built-in Chromecast as well as rather useful Apple AirPlay functionality. The former works through apps and you can mirror your device's display directly through its interface, while the latter needed an app to work. I used AirScreen which worked well with both iOS and macOS devices. AirPlay does need a fast Internet connection to work well, but the lack of 5GHz Wi-Fi might cause stability issues for some.

Like many televisions in this price segment, the Thomson Oath Pro Max 55-inch LED TV runs on the Android TV operating system. Android TV 10, the current software version on the TV, worked well for me, and I had immediate access to the new Android TV user interface thanks to a firmware update that was available as soon as I set it up.

As described in my review of the Hisense 55U6G TV, the new interface puts more effort into content discovery and recommendations, but still retains the core feel and familiarity of the operating system and apps built for it.

For anyone used to Android TV, the experience will be familiar on the Thomson television. All major apps and streaming services are available, with some such as Netflix, Amazon Prime Video, and YouTube preinstalled, while others can be downloaded from the Google Play Store for Android TV.

Basic picture and sound settings are accessible from anywhere in the UI, even while streaming content, and I was also impressed with the native availability of real-time information about the streaming resolution and connection by pressing the ‘i' button on the remote. The software worked well and I had no notable issues with functionality during my time with the Thomson TV.

When it comes to specifications and features, the Thomson Oath Pro Max 55-inch TV is impressive for the price; most LED-backlit TVs with a similar feature set cost closer to Rs. 50,000, while Thomson offers all of this for less than Rs. 40,000. However, its performance offers an explanation as to why this price difference exists.

In my experience, the Thomson TV fell short in some key areas. The core experience is straightforward, but unlike other similar televisions I've used, the Thomson TV didn't seem to do much with its HDR support at all. HDR content, including season one of The Book of Boba Fett and the latest special of The Grand Tour, looked dull and oddly gloomy.

Colours appeared greyed out, and this TV didn't seem as bright as the rated brightness of 500nits would suggest. Oddly, SDR full-HD content appeared a bit brighter and less dull than HDR content. Black levels on the TV weren't good either, with darker shades tending to appear grey. Nighttime scenes were often hard to watch except in a completely dark room.

Although the picture was sharp, Ultra-HD HDR content such as The Book of Boba Fett appeared a bit dull and gloomy

Even vibrant and colourful TV shows such as Formula 1: Drive to Survive felt considerably duller on this TV as compared to the 55-inch Mi TV 5X. While it is possible to tweak the picture to make things a bit brighter, black levels never really improved. The picture looked better at lower brightness levels, and turning down the lights or drawing the curtains in the room made the viewing experience better.

Although brightness was an issue, the Thomson Oath Pro Max is a large-screen Ultra-HD TV, and it's hard to argue with the sharpness and level of detail that this resolution delivers. The picture was crisp and detailed for the most part, and motion was handled adequately, without any significant artefacts or flaws visible even in the fast-paced action scenes in The Book of Boba Fett.

Interestingly, the lack or inadequacy of the tech in the Thomson TV actually resulted in much more pleasant motion blur compared to some of the half-baked attempts I've seen in this segment. This even seemed to apply to SDR content, since not having to invoke HDR meant the TV seemed to be more at ease just delivering a sharp, detailed, and smooth picture.

Full-HD content was acceptable on the Thomson TV, with shows such as Kim's Convenience and Schitt's Creek on Netflix looking decent, despite the dull colours and grey-ish tones. Live television such as sports content streamed through Disney+ Hotstar was decent, but Hotstar's weaker signal quality as compared to Netflix and Amazon Prime Video was a lot more obvious on this television, at least in terms of sharpness.

Sound quality on the Thomson 55-inch Oath Pro Max LED TV was pretty good for the price. The 40W speaker system is capable of getting quite loud. I did experience some sharp volume spikes with soundtracks and certain action scenes in movies, and I needed to quickly lower the volume, but dialogue was clear and audible even at low volumes and background scores sounded decent.

Given that this TV is targeted at buyers looking for value for money, the sound from the TV's speakers is good enough for basic use. While a soundbar or speaker system would obviously help, I didn't particularly feel the need to look beyond the TV's own audio capabilities for most things.

Many affordable 55-inch televisions from big-name brands cost over Rs. 40,000 now, and so the Thomson 55-inch Oath Pro Max LED TV seems to be quite a compelling deal at Rs. 36,999. On paper, it's an excellent option thanks to an Ultra-HD screen, HDR support, a good remote, and useful features such as AirPlay and Google Assistant support, plus Android TV 10. In practice, though, the considerable price difference between this TV and most of its competition does show in the performance.

Dull video, greyed-out colours, ineffective HDR, and poor brightness and black levels hold this Thomson TV back, although the sharpness of the screen and the lack of interference from the TV's processing did seem to help to some extent.

This TV is worth considering if you absolutely do not want to spend more than Rs. 40,000 but still want a 55-inch Ultra-HD TV. However, do keep in mind that options such as the Mi TV 5X are worth looking at if you can increase your budget a bit.