Dream11 claims it has over 110 million users on the app. 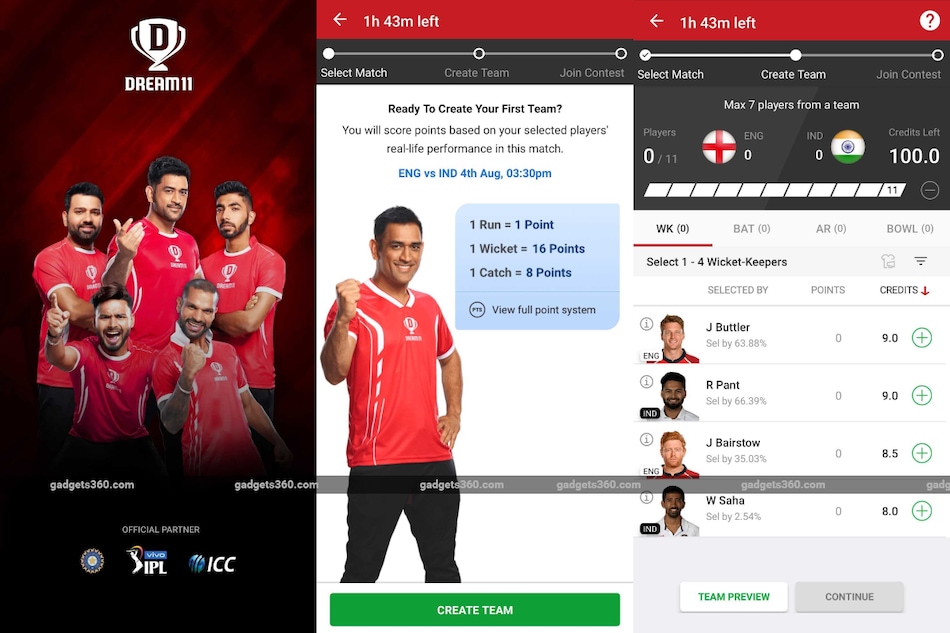 Dream11 is an online fantasy platform for multi-category sports

Dream11 is an online fantasy sports app — a category of apps that has seen some controversy in recent times with critics calling it nothing but gambling, while proponents defend it as being skill-based instead. The fantasy sports segment is banned on Google Play, and multiple states in India also ban paid contests on Dream11. Supreme Court of India ruled Dream11  fantasy sports as not gambling and recognises it as a 'Game Of Skill'. Dream11 enjoys a user base of over 110 million in the country.

The company attributes this to the Internet penetration and growing adoption of smartphones in India, along with the overwhelming popularity of cricket. Dream11 offers a single-match freemium model of daily fantasy sports. Users can play in practice contests that are free to join or in cash contests that require an entry fee.

According to a recent FIFS-KPMG report, online fantasy sports operators' gross revenues stood at over Rs. 2,400 crore for the FY 2020 as compared to over Rs. 920 crore in FY 2019, an increase of almost three-times over a period of 12 months. The report reveals that Indian online fantasy sports platforms have shown a rapid increase in their user-base YoY, growing from 2 million in 2016 to 90 million in 2019. Dream11 has been riding this wave, propelled further by hugely popular sporting tournaments like IPL, and is now considered the world's largest fantasy sports platform.

Expert opinion: TechArc chief analyst Faisal Kawoosa says, “Fantasy sports let's one immerse into the game. In India, a sport like cricket is idolised. Hence, a great connection and reason for popularity. Esports and other online gaming is a reality now and it is a promising and feasible business in the long term. As the sector grows in India I think the shortcomings will get solved, for instance, legal aspects. Personally, I believe there is a strong interjection between skill and chance in such games.

Gadgets 360 spoke to Bhavit Sheth, Co-Founder and COO, Dream11 to know a bit more about the company's overwhelming journey so far and its future plans.

I completed my engineering at DJ Sanghavi College of Engineering, Mumbai, in 2007 and co-founded Dream11 along with Harsh in 2008. From 2008 to 2012, we dabbled with different online fantasy sports (OFS) formats that would work best for Indian sports fans.

2. What inspired you to build Dream11?

Dream11 was born out of a drive to solve a personal problem. Harsh and I have always been avid sports fans and participated in EPL's online fantasy sports contests. When the IPL launched in 2007, we started looking for fantasy sports platforms hosting IPL, but there were none. We felt a need to share the thrill of fantasy cricket with our cricket-crazy nation. Our shared vision and passion for technology, sports, and fantasy sports translated into something much larger.

3. How were the first few years of business at Dream11, and what were some initial struggles you faced?

Fantasy sports have been played worldwide for over 50 years, yet it was a relatively unknown concept for Indian sports fans. Launching fantasy sports in India in 2008 meant that we had to educate potential hires, investors, and, most importantly, users about the concept. This, too, was when high-speed Internet was not easily accessible to a majority of the population.

For an entrepreneur, the first few years of starting a business are always the most challenging and memorable. When we launched Dream11 in 2008, we began as a social network for sports with fantasy sports at its core. At that time, we provided a free-to-play, season-long model that was ad-driven. However, the initial plan didn't work out, and over the next three years, we experimented with various models before we finally pivoted to the current format in 2012.

4. When did you begin seeing considerable progress in the business, and why?

With easy access to the internet and smartphones coupled with the right amount of education and product-market fit, Dream11 started witnessing phenomenal growth from January 2015 onwards. We reached 3 lakh users and also received our Series A funding from Kalaari Capital and Think Investments. Each year since then, we started gaining more traction and achieving new milestones.

We slowly started partnering with sports leagues, both domestic and international, to generate more awareness. We also launched fantasy sports for many other sports, besides cricket, like football and kabaddi.

In 2017, we onboarded Dhoni as our Brand Ambassador and got recognition from Punjab and Haryana High Court as a game of skill. Currently, Dream11 has reached 110 million users, hosts fantasy sports for 11 sports, and was also the title sponsor of IPL 2020.

In sports, Dream11 is used to imply a dream team of 11 players. Since the platform was meant to provide sports fans with an opportunity to create their dream team for their favourite sports such as cricket, hockey, football, etc., the name Dream11 seemed apt.

6. Fantasy sports apps are banned from the Google app store. How did you gain the trust of users to download the app through other means?

The biggest factor that has worked for us at Dream11 is taking a 'user-first' approach. When we started Dream11, we had a very small team and a much smaller user base. As online fantasy sports were new to Indian sports audiences, we wanted to create an offering that had an excellent user experience that addressed the needs of sports enthusiasts. We decided to build connections with our users to get inputs and feedback directly from them. This helped us to continuously improve Dream11. Users also realised that they were indeed being heard and they could trust us.

A lot of our initial decisions around prioritising user needs and personally connecting with them worked for us in establishing user trust and loyalty. With fantasy sports being inherently social, the users who had a great experience on the platform spread the word to their friends and families as well. We eventually launched a referral programme that propelled our growth through positive word-of-mouth references from users and grew user conversions.

7. Why is the fantasy sports segment so popular in India?

India is a cricket crazy country with many sports enthusiasts. There are over 850 million sports fans in India, out of which 400 million watch or engage with sports online. We all have strong opinions, especially on team selection. Through online fantasy sports, fans get the opportunity to showcase their knowledge of the sport and compete with their friends, family and fellow fans who are equally passionate about sports.

We agreed with the BCCI's decision to postpone the IPL. It was important, at that time, to focus on tackling the crisis and ensuring the health and safety of everyone involved. As fantasy sports is entirely dependent on live sporting events, and IPL is the most popular event, it did impact us. While not at the scale of IPL, we were still able to keep fans engaged by featuring sporting events in regions that were less impacted by the pandemic at that point. We are looking forward to the resumption of the 2nd half of IPL in September 2021.

9. How does Dream11 manage to engage a large number of users on the app, especially during highly popular tournaments like the IPL? What are the technological expertise and benchmarks behind this?

During popular tournaments, we have managed 80 million requests per minute and over 5.5 million user concurrency. While a lot of effort has gone into getting our systems ready, the early adoption of the cloud has been one of the most critical parts of our two-pronged strategy - predictive and reactive. Our automated platform predicts the expected traffic for every match, and the automated scripts take care of baseline IT Infrastructure Deployment. In our deployment pipeline, it is a must that each release is validated against the performance and resilience of the predictive load. We have a rigorous plan to execute load tests before we release features. This prepares us for huge traffic spikes in the future.

Our microservices are horizontally auto-scalable so that they can manage a sudden surge in user requests. We do this scaling before the match start time, which is also the deadline to create a fantasy sports team, and according to traffic projections.

We heavily leverage data analytics for product enhancements such as personalisation, enhanced gameplay, contest generation, real-time leader boards, etc. Deep Learning models are also built to analyse consumer behaviour and create a personalised user experience. Artificial Intelligence and Machine Learning are used to detect any anomalous behaviour across the system, generate alerts, and sometimes take self-corrective actions. To ensure data security, we deploy preventive and detective controls to monitor its applications and infrastructure. We currently have over 300 Sportans [what Dream11 calls its employees] in the tech team, and as we further scale-up, we will be hiring another 200 Sportans in the next six months in tech, design and product.

10. What has been the biggest learning during the COVID-19 crisis?

In order to survive and thrive, it's very important to be able to quickly adapt to any situation. With the whole world abruptly coming to stand still at the onset of COVID-19, live sporting events across the globe were affected as well. This, in turn, impacted the fantasy sports industry. However, we took it as an opportunity to regroup and rethink our strategy. From a product standpoint, during COVID-19, we introduced newer sports, such as baseball, handball, and leagues hosted in regions that started recovering from the pandemic, such as St. Lucia, Bundesliga, La Liga and EPL. On the tech front, we cleared our tech debt and upgraded our systems. We continued with our hiring plans, despite the business impact and grew our team of talented Sportans.

During the pandemic, we realised the importance of transparent and open communication and have taken several measures to ensure everyone is heard, given appropriate support for physical and mental health management with access to professionals through our partnership with ‘Visit' and ‘Santulan', that provide confidential consultations, health check-ups and counselling. Since the pandemic impacted almost everyone, we ensured that our Sportans prioritised their health and safety without worrying about their work or job security.

We launched a Rapid COVID Resource Channel for immediate COVID related help - from needing resources at home to getting medical help or hospitalisation. We also launched a free vaccination drive for all Sportans and their families across the country. These are all in addition to our regular internal initiatives to destress Sportans, build team bonding and uplift their moods, such as weekly AMA sessions, fun contests and quizzes, 90 minutes of compulsory lunch break, no-meeting Thursdays and occasional surprise gifts for all Sportans and their families.

As an entrepreneur, my advice would be to believe in your vision, align your team members to it and stay persistent. It's easy to give up when things are not going your way, but persistence helps you power through the rough phases. It's completely fine to make mistakes and fail, but you need to fail fast and learn fast. Finally, ensure that you have someone who can be your sounding board, whether it be your team, mentor or peer.

12. What is the employee strength at Dream11? Are you looking to hire currently?

Currently, we have 500+ Sportans at Dream11 and are looking to hire about 200+ more across core functions in tech, design and product in the next six months.