Are WhatsApp and Jio Cooling Off on Payments Partnership?

Jio Payments Bank was one of the five initial banking partners enabling WhatsApp’s payments feature, but it disappeared from that list. 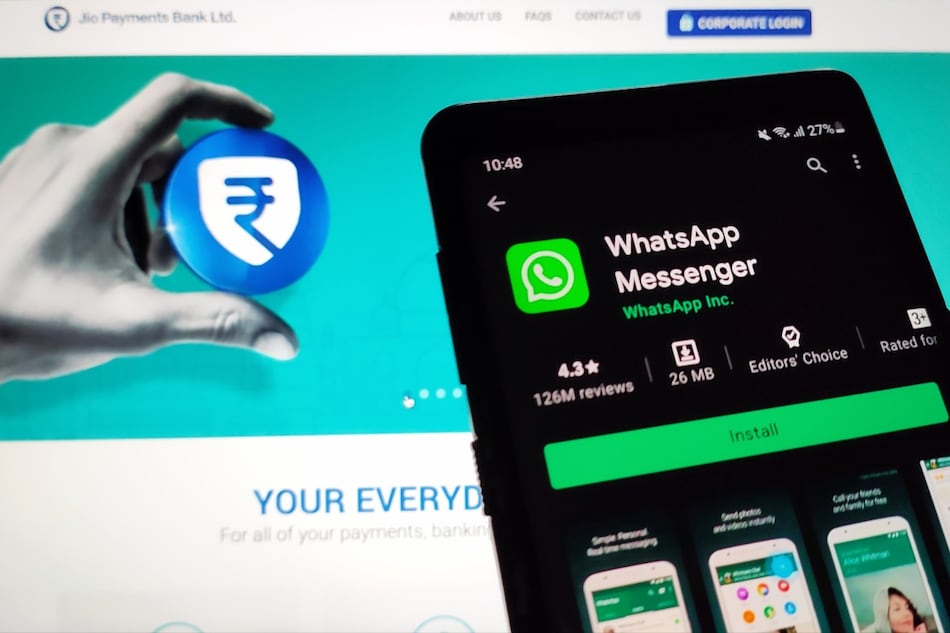 Facebook recently hosted the Facebook Fuel for India 2020 virtual event where CEO Mark Zuckerberg showed interest in pushing payments through WhatsApp deeper in the country. The social media giant also hosted a special session at the two-day event to highlight different use cases of the instant messaging app. However, while naming banking partners behind WhatsApp's payments feature, Facebook did not mention Jio Payments Bank and instead listed ICICI Bank, HDFC Bank, Axis Bank, and the State Bank of India as the four banks powering payments through the app.

Jio Payments Bank was among the five banking partners to enable payments on WhatsApp. The Facebook-owned company had mentioned the name of the payments bank while announcing the launch of its anticipated payments feature in November. However, it omitted Jio Payments Bank from all its announcements during the Facebook Fuel for India December 2020 event. WhatsApp also excluded the bank's name from one of its webpages detailing the service terms of payment service providers (PSPs) enabling payments on its platform.

In April, Facebook agreed to buy a 10 percent stake in Reliance Industries' Jio Platforms for Rs. 43,574 crores. The deal was expected to boost WhatsApp's payments feature by leveraging the infrastructure of Jio, and build it as a strong competitor against the likes of Google Pay and Paytm.

Nevertheless, Jio's payments bank, which debuted as the telco's answer to Airtel Payments Bank and Paytm Payments Bank, has itself not yet made significant progress in the country's payments market. It was incorporated as a joint venture between Reliance Industries and public sector bank State Bank of India (SBI) in November 2016 and started its operations in April 2018.

According to the data available on the National Payments Corporation of India (NPCI) website, Jio Payments Bank has only take a small share of Unified Payments Interface (UPI) transactions. The payments bank processed over 4.2 lakh transactions that accounted for a total of Rs. 20.35 crores in November, as per the publicly available data.

One of the reasons behind the smaller number of UPI transactions of Jio Payments Bank against the competition could be due to its limited presence in the market of payments platforms. This was where the initial tie up for WhatsApp's payments feature could have helped.

Reliance Industries and WhatsApp both did not comment when we reached out to them for this article.

Why is Jio so quiet about payments?
Nearly four months after getting the nod to commence operations for Jio Payments Bank in 2018, Jio parent Reliance Industries expanded its partnership with SBI to provide support to the bank's YONO app and integrated its digital banking experience within the MyJio app. The Mumbai-headquartered company, however, didn't make any announcements particularly around the expansion of its payments bank at that time.

Given that it has been one of the largest disruptors in the telecom space, many were expecting the same kind of ad blitz and large scale deployment for its payments offering, but instead Jio seems content to make quiet moves in this space.

Former General Secretary of All India Bank Officers' Confederation (AIBOC) Thomas Franco said that by not publicly promoting Jio Payments Bank but instead giving technical support to SBI, Reliance appears to have plans to go for a universal bank or even establish a presence to take over some of the public sector banks.

“My suspicion is that Reliance started Jio Payments Bank just to create a record that they are already into banking because earlier when they applied for a universal banking license, they were not given the license,” Franco told Gadgets 360.

The government initiated the model of payments banks to uplift financial inclusion in the economy. It was initially projected as a “revolutionary step” towards growing banking services in the country as it allowed non-banking entities to start accepting demand deposits and issue debit cards — just like a traditional bank — but with a limit of a maximum balance of Rs. 100,000 per customer. Payments banks are also not allowed to offer any lending services or issue credit cards.

Some experts believe that the limited options available for payments banks to grow their businesses turned off companies including Reliance Jio. Some of the early applicants for payments banks including Cholamandalam Distribution Services and Tech Mahindra even surrendered their licenses.

“Barring Paytm, payments banks have made limited dent in the marketplace for deposit accounts and payments products in wake of the rapid growth of digital financial services offered by traditional financial institutions and non-banks operating outside of the payments banking framework,” said Sampath Sharma Nariyanuri, fintech analyst at S&P Global Market Intelligence.

“While there have been some payments banks who have been active like Paytm, FINO and Airtel, the impact of other payment bank licensees such as Jio, India Post Payments Bank, and NSDL Payments Bank who have begun operations have not been significant. This is due to inherent strategies or business executions of the individual entities,” he said.

In the case of particularly Jio Payments Bank, market analysts consider that the absence of an integrated payments app like what Paytm has is also a major reason why it has not yet made any success.

“I think alternative means of using Google Pay or Paytm is definitely a wallet, which seems to be much more preferred as compared to a pure payments bank where people need to open a bank account with the payments bank and can then make transactions,” said Sanjay Doshi, Partner and Head of Financial Services at KPMG India.

Ujjwal Chaudhry, Associate Partner at RedSeer Consulting, told Gadgets 360 that Reliance Jio took a back step on the payments side because the market had added multiple players with deep pockets who were acquiring users at a fast pace. He also added that Jio parent Reliance Industries appeared to have shifted its priority towards online retail over payments where WhatsApp is showing some interest nowadays.

Bumpy ride for WhatsApp payments
WhatsApp started testing its payments feature in India through a trial run back in February 2018. It, however, took nearly two years and nine months before the feature actually went live — and that too in a limited fashion. The Facebook-owned company faced concerns over data localisation, and the Supreme Court even asked the Reserve Bank of India to file a compliance report on the matter. Some cyber experts also alleged that payments on WhatsApp might put Indian digital banking at risk.

WhatsApp was finally allowed to make its payments feature live for the public using UPI on November 5. The NPCI, however, restricted its access to two crore WhatsApp users in the country in the initial phase. That is roughly five percent of over 40 crore people using the messaging app in the country.

The NPCI said that the approval of two crore users was given in a “graded manner”, but it didn't provide any clarity on whether it would allow expansion over time.

Data opportunity in the payments market
Despite several roadblocks and the ceiling on users even after waiting for several months, WhatsApp said in the official announcement that it was “excited” to offer its payments feature in the country. The excitement could mainly be due to the data that helps payments apps expand their businesses.

“Basically, every digital payment that you make is about scoring and profiling you as to what you spend on, how much do you spend — very narrow profile or financial profile of you,” said Lakshmanan of Cashless Consumer.

WhatsApp often highlights that it keeps user data end-to-end secure. However, this isn't exactly the case with the payments data.

The company stated in its separate privacy policy for the payments feature in India that it uses the information it collects through the feature “to operate, provide, improve, understand, customise, support, and market” its services. The information includes the details you provide during the registration including your bank's name and UPI ID.

WhatsApp also gets transaction information, including receiver's name, phone number, BHIM UPI ID, payment amount, and currency. However, it mentioned that “WhatsApp messages sent with Payments are delivered once the transaction has processed and are treated as described in the WhatsApp Privacy Policy.”

Additionally, WhatsApp shares your payments information with PSPs banks and the NPCI as well as service providers.

“We may share information collected under this India Payments Privacy Policy with service providers to send payment instructions to PSP banks; maintain your transaction history; provide customer support; improve, understand, customise, support, and market Payments; and keep Payments safe and secure, including to detect, prevent, or otherwise address fraud, safety, security, abuse, or other misconduct,” the company said in its privacy policy.

While Reliance Industries is certainly not putting much into Jio Payments Bank at this stage, it does have shown immense interest in commerce — particularly in building JioMart a standalone e-commerce platform to take on Amazon and Flipkart. This could be where both Reliance and Facebook are likely to put their joint efforts in the coming future. The data that WhatsApp receives from its payments feature may also be utilised to make JioMart a stronger contender.

“The partnership between Facebook's WhatsApp and JioMart could be critical to both companies. WhatsApp's attempts to get small businesses on its platform could get a boost, while JioMart can leverage the messaging app's reach among consumers,” said Nariyanuri of S&P Global Market Intelligence.

What would be the future of Jio Payments Bank?
Reliance Industries' growing interest towards commerce doesn't mean that the company will eventually forgo Jio Payments Bank and leave its existence in the payments market.

“I believe Reliance Jio would wait until they get a small financial bank license to fully exploit the benefits of providing banking services to their customers,” said Deepak Abbot, former Senior Vice President for Product at Paytm and Co-Founder of gold loan startup IndiaGold.

In December 2019, Reserve Bank of India noted in its guidelines that payments banks in the country can apply for a small finance bank license after completing five years of their operations. An internal working group constituted by the central bank, however, recently submitted a recommendation that the existing five-year threshold should be dropped to three years.

The payments bank license is also likely to help Reliance Industries for its aspirations in building physical and digital retail businesses.

“Jio Payments Bank can work as a payment gateway for both online and offline transactions and provide a comprehensive suite of deposit accounts and payments services to consumers and merchants in the retail ecosystem,” said S&P Global Market Intelligence's Nariyanuri.

Market watchers including Lakshmanan of Cashless Consumer believe that Jio Payments Bank could be used to digitise payments in the business-to-business space, which doesn't have as tough competition as in the end-consumer space.