The testing of the Wave Bar feature will be available to selected Android and iOS users starting Friday. 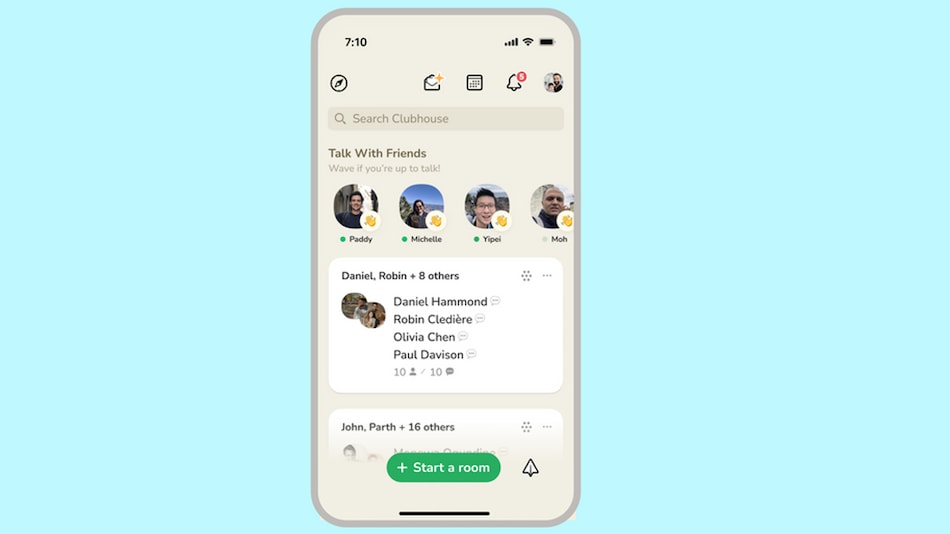 Clubhouse is adding a new feature to increase user interactions on the platform. The audio-chat app has started testing a new 'Wave Bar' feature that will show connections available online and allows users to start a social room with them just by sending a wave. With the latest functionality, friends of speakers can also join the conversation. Wave Bar is similar to the Wave feature, launched by Clubhouse in September last year. The Wave feature let users to virtually wave at friends to show they are open to a private chat.

Clubhouse on Thursday announced the testing of the new Wave Bar feature. As mentioned, users can see friends who are online on the Wave Bar at the top of the screen and invite them for a chat by waving. Speakers in the social room can ping in friends using the new ping bar arranged at the top of the room. Clubhouse is giving the option to lock the room for users who prefer to keep the conversations private. The Wave Bar experiment will start rolling out to limited Android and iOS users starting Friday.

The experimenting of Wave Bar follows Clubhouse's efforts to add text-based chat to the platform. Recently, it has added the option to interact in voice rooms over text. Named In-Room Chat, the feature offers a text chat area within a live room. Clubhouse also introduced support for 13 new languages on the social audio platform.

As mentioned, back in September last year, Clubhouse unveiled a feature that lets users to virtually wave at friends inside its audio-only chat app to show they are open to a private chat. A private audio chat room will open when a person accepts the wave. It has been actively adding many new features to the platform to compete directly with social media giants like Facebook, Instagram and Twitter Spaces.

Winamp to Auction Iconic 1997 Skin as an NFT, Sale Proceeds to Be Directed to Music-Linked Charities