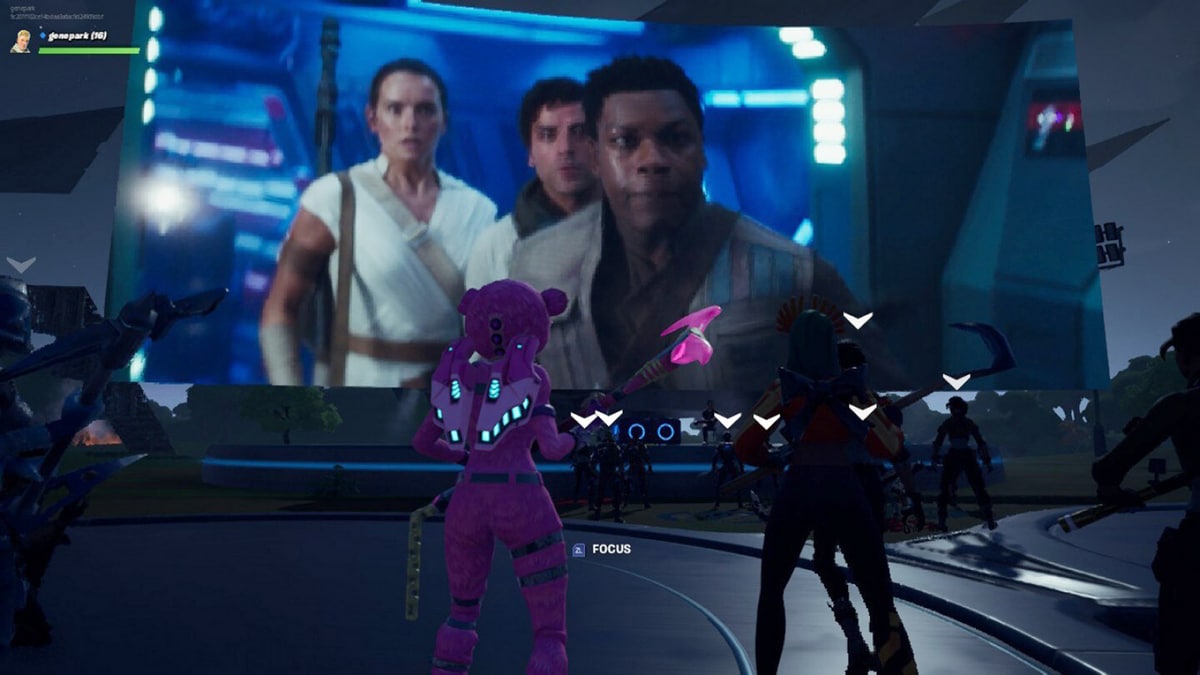 Millions of Fortnite players had a bad feeling about a historic Star Wars event inside the game, just minutes before it went live. Players, including high-profile streamers, had difficulty logging into the online title by Epic Games. Players across all platforms, including the mobile phone and Nintendo Switch, were met with error messages, and Epic Games announced delaying the event by 10 minutes after its expected 2pm start time.

Sure enough, 13 minutes later, the Millennium Falcon roared above the Fortnite island, chased by First Order TIE Fighters. After a short dogfight, the Falcon landed and a Stormtrooper, FN-143, emerged. The Game Awards creator Geoff Keighley emceed the event, and introduced The Rise of Skywalker director J.J. Abrams, who appeared in the game as himself, albeit with very tight black pants.

Abrams, Keighley and the Stormtrooper conducted a live interview and skit in front of players at the Risky Reels location, the game's theatre area. After a few gags about the Stormtrooper's name and acting abilities, Abrams asked players which scene they'd like to see. Players were offered four choices, including scenes that involves a Jedi mind trick or the Knights of Ren and a Kylo and Rei power ballad. The first choice, Darth Jar Jar, is a reference to the meme that the much-maligned Star Wars character is the evil mastermind behind the whole saga.

Afterward, Abrams asked players about their favourite colour of lightsaber. Players had 10 second to choose before the Falcon was chased off again by enemy fighters. At the end of the event, the voice of Emperor Palpatine, the returning villain from the original trilogy, boomed in the air, threatening the "return of the Sith."

The Falcon left behind a chest full of lightsabers, as each player gained the colour lightsaber they chose. The lightsaber is now introduced into the main game's weapon rotation, featuring elaborate combat animations. The game also features Star Wars-related decor around the island.

Events like these are typically crowded inside Fortnite, causing many players to stress about logging on in time, much like this afternoon. For a sense of that scale, a live Marshmello concert earlier this year was viewed by more than 10 million people logged into the game.

This isn't the first big crossover event with a film. Fortnite has been host to two Avengers-related events. Fortnite also had a Weezer album listening party.

Fortnite is not only one of the world's most popular games, boasting millions of users every day, but it's become a bit of a social network. And the game often hosts live events that bring the player base online. The game gained a lot of attention this fall by turning a scheduled downtime of the game into a large-scale story-based event, sucking the entire game into a virtual black hole.