Google Assistant Routines Are Reportedly Getting a Redesign, New Sunrise and Sunset Triggers

The sunrise and sunset triggers for Google Assistant will let users set routines in relation to the sun’s position at a specified location. 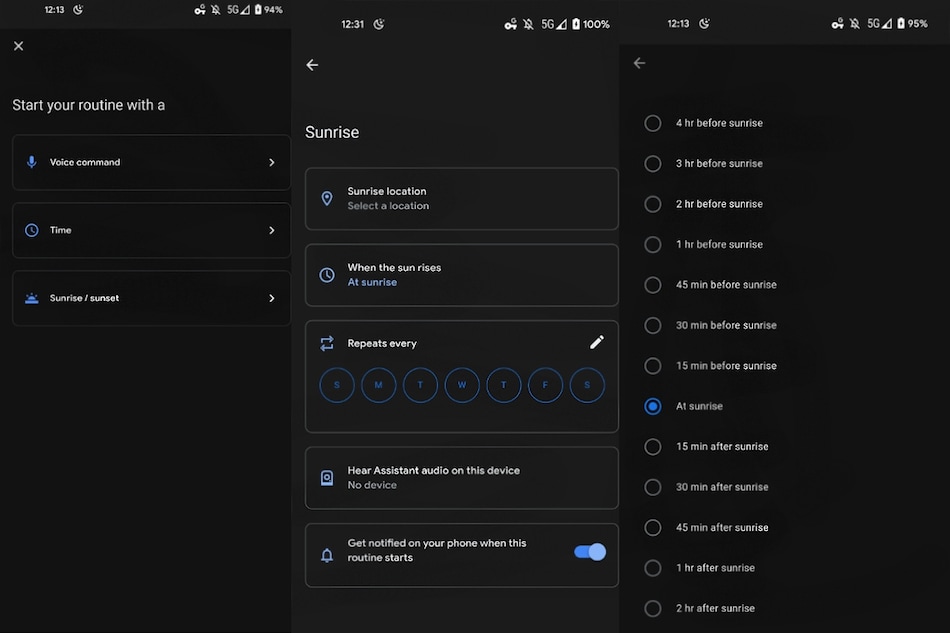 Google Assistant is reportedly getting a new feature that will let users select sunrise and sunset as triggers to start a routine. The routines setup page, which can be accessed from the Google Home app or Google Assistant settings, is also reportedly getting a redesign with a simplified view. The new option to trigger a routine with sunset or sunrise can be seen alongside existing options of voice command and time on the Routines setup page in screenshots surfaced on Reddit. The redesign also appears to leave the page with only two sections for creating a new routine — ‘How to Start', and ‘This Routine will'.

As per the screenshots shared by a Reddit user, the sunrise/ sunset Assistant routine triggers on the Google Home app will let users set routines in relation to the sun's position. Google Assistant will be able start your custom routine based on the time of the day for a specified location. Users can also select when they want the routine to begin in relation to sunrise and sunset, such as 4 hours before sunrise, 15 minutes before sunrise, at sunrise, 30 minutes after sunrise, etc.

Users will be able to customise the routines to trigger on certain days of the week and also choose to get notifications when the routine starts, screenshots show. Routines can be set as reminders to send and read texts, adjust home devices such as lights and plugs, adjust phone settings, play and control media, and more. These are broken down into specifics and you can add custom actions to them.

According to the Reddit post, the new triggers are available in the latest beta release of the Google Home app (v2.35.1.5).

According to a report by 9to5Google, however, the routines setup page under Google Assistant settings is getting a comprehensive makeover apart from getting the new sunset and sunrise triggers. Google Assistant is getting ‘suggested actions' at the bottom of the Routines page, as per the report.

The redesign also makes it easier to edit existing routines by numbering all secondary actions that it will trigger. The report claims that the redesign is widely rolling out to the Google Home app for both Android iOS users.