Telegram Premium is available at a price of Rs. 469 a month to iPhone users in India. 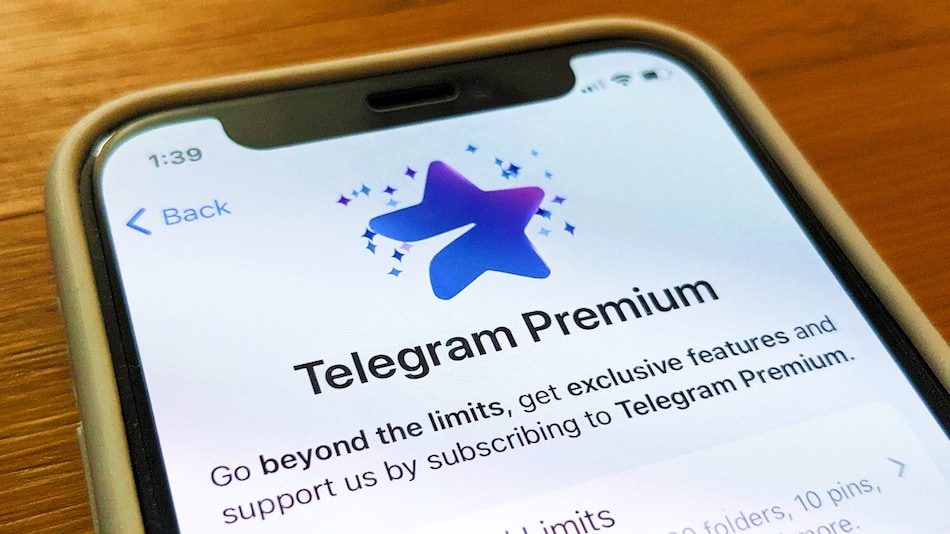 Telegram Premium — the paid subscription that brings additional features to the messaging app — has been started rolling out to users. The premium tier enables users to access up to 4GB file uploads, faster downloads, and the ability to convert voice messages into text. Alongside the launch of the paid subscription, Telegram has introduced a list of improvements for all users on the platform, including the ones who are not purchasing the premium tier. The Dubai-based company has also announced that now it has over 700 million monthly active users.

In India, Telegram Premium is available at Rs. 469 a month on the iPhone. Pricing of the premium subscription on Android is yet to be announced. It is likely that the company would go with a country-wise phased approach.

By paying the monthly subscription, users on Telegram Premium get double the file uploads size limit that is of 4GB, up from the existing 2GB allocation, as announced in a blog post. This means that users will have more space for sharing files and media on the app.

Users on the free tier of Telegram will also be able to download large-size media and files that are coming from a Telegram Premium account and are above 2GB in size.

However, Telegram Premium is touted to offer a faster download experience to help users quickly access large media and files while on the go.

Telegram Premium also enables users to follow up to 1,000 channels, create up to 20 chat folders with up to 200 chats each, and pin 10 chats in the main list. Paid users can also add a fourth account to the Telegram app. Further, the premium tier enables users to save up to 10 favourite stickers.

The paid version also enables users to write a longer bio along with a link. Similarly, paid users get the ability to add more characters to media captions and respond using up to 400 favourite GIFs.

Telegram has also enabled its paid users to reserve up to 20 public t.me links. Additionally, the premium subscription enables Telegram users organise chat lists by changing the default chat folder. This will allow paid users to get a custom folder as the default destination each time when they open the app — in place of the existing All Chats tab.

Users subscribing to the premium tier can convert their voice messages to text using the company's transcription support.

Some stickers available to paid users on Telegram get full-screen animations. The company also said that its premium sticker collection on the app would be updated monthly by different in-house artists.

Full-screen animation effects in premium stickers can be viewed on the free Telegram tier. However, users on the paid plan can only get access to send these stickers.

In addition to the animated stickers, Telegram Premium users get over 10 new emoji. Users can also set animated profile pictures that will animate for all users when they look at their chats and chat lists.

Each premium subscriber gets a special badge that appears next to their name in the chat list, chat headers, and member list in groups to highlight their paid subscription. Users subscribing to Telegram Premium also get the ability to change their default app icon with a premium star, night sky, or turbo-plane.

Aside from the updated experience available to paid users, Telegram has introduced improvements for all its users. These improvements include the ability to let group admins review new members before approving them to write in the chat. Users will see a Request to Join button to let admins have exclusive access to allow new members to join their group.

Admins can also chat with new users to let them follow the rules of their groups — before allowing them to start sending messages there.

Telegram has also added verification badges in chats for groups, channels, and bots that are related to a known personality or organisation.

The app verifies channels, bots, and public groups if they are already verified on at least two social networks, such as Twitter and Facebook. However, unlike Twitter's verification, individual user accounts on Telegram are yet given the ability to get verified.

Telegram has also enabled developers to include a photo or video in the "What can this bot do?" section of their bots to let them better describe the purpose and scope of their offerings on the platform.

Users specifically on Android have received improved chat previews to let them view the whole chat by scrolling through them with a press and hold gesture — without marking them as read.

There are also new buttons to let you mark a chat as read, mute it, pin it, or delete it.

Android users have also received the option to automatically save media coming from users, groups, and chats to Gallery. Furthermore, Telegram users on Android have got better audio and video quality in voice and video messages.

On iOS, there is an improved external sharing support on Telegram that brings an animated progress bar.

Aside from the improvements meant for specific software platforms, Telegram said that it has included over 100 fixes and optimisations that are meant for all its mobile and desktop apps. These updates include bug fixes and speed improvements. Users on the latest iPhone and iPad models with ProMotion support also get smoother animations.

It is important to note that Telegram clearly said its latest update is being rolled out gradually. This means that you may need to wait for some time to get all the new features.

Despite the growth, Telegram is lagging far behind WhatsApp that has a base of more than two billion users around the world.

Nevertheless, Telegram's move to start monetising its growing user base by introducing the premium tier seems interesting as WhatsApp — alongside other messaging platforms — have not yet brought a paid subscription to generate revenues from their consumers. The Meta-owned app, though, has businesses in focus to monetise its platform in the future.