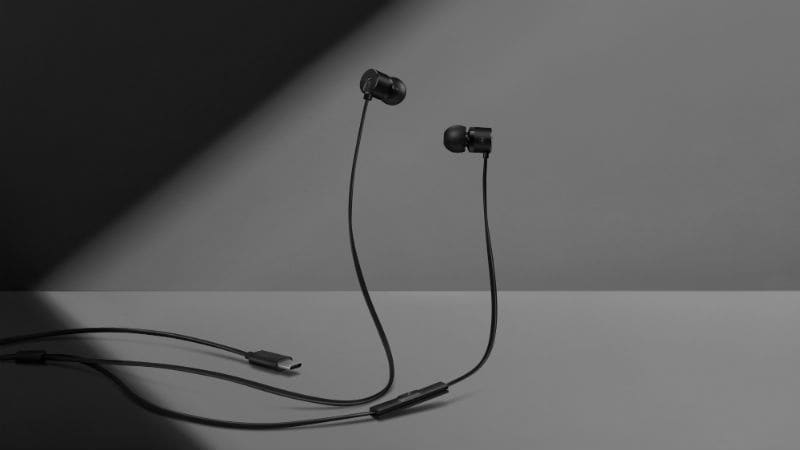 OnePlus on Thursday announced that it will launch an updated USB Type-C version of its Bullets V2 headphones alongside the next smartphone, which is so far rumoured as the OnePlus 6T. The headphones, called the OnePlus Type C Bullets, will carry a price tag of Rs. 1,499 - Rs. 300 more than the OnePlus Bullets V2 - and will be available for purchase through online and offline retail channels, the company said in a press statement. In the US, they are priced at $19.99, the same as the original Bullets V2. As suggested by their name, the Type C Bullets will have a USB Type-C interface instead of the traditional 3.5mm connector. This indicates that the 3.5mm headphone jack that has so far been a part of all OnePlus handsets will not be available on the OnePlus 6T. The Chinese company claimed when compared to the headphones with a 3.5mm connector, the Type C headphones ensure "minimal loss of quality for a superior audio outcome." The original Bullets V2 in-ear headphones were launched in India back in November 2016 - just a couple of months after Apple disrupted the smartphone market by ditching the standard headphone jack from the iPhone 7. Separately, OnePlus in an interview confirmed it would be ditching the 3.5mm headphone jack on the OnePlus 6T.

Without confirming any schedule, OnePlus said that the Type C Bullets headphones were set to be launched alongside the next device, projected for the fourth quarter of 2018. The headphones are touted to be a "step up" from the Bullets V2, though they will echo the metal design of the previous wired headphones. "Each detail of these earphones is crafted with the unique attention to detail that OnePlus is known for - for example, to make Type C Bullets easier to use, the company has added aramid fibre to the wire in order to make the Type C Bullets more durable and resistant to stretching," the company said in the statement.

The OnePlus Type C Bullets headphones will include a high-end, professional DAC by Ciruss Logic and come with a higher dynamic range, higher signal-to-noise ratio, and low noise floor than the predecessor. Also, it is claimed that the Type C headphones will ensure a minimal quality loss for a superior audio outcome. This is something similar to what Apple proclaimed at the time of launching the iPhone 7. However, it is worth noting here that OnePlus has up until now retained the 3.5mm headphone jack by underlining its growing adoption among users.

Having said that, OnePlus has now claimed, citing an internal survey, that the number of users who used in-jack headphones dropped "drastically" from 80 percent in 2017 - with 59 percent of its users switching to wireless headsets, as per a poll conducted in 2018. "OnePlus is again demonstrating its flexibility, offering options for different users by developing Type C Bullets to complement the already revered Bullets Wireless," the company said.

The OnePlus Bullets Wireless come with magnetic switches and are available in India with a price tag of Rs. 3,990. The headphones also include the company's Dash Charge technology to deliver five hours of playback within 10 minutes of charge.

Separately, OnePlus co-founder Carl Pei in a conversation with TechRadar confirmed that the company's next handset won't come with a headphone jack. "We knew this was an option for a very long time, we were just waiting for the right time," Pei said, as quoted by the website. The executive has also claimed that the removal of the jack has helped the company to "put more new technology" into the device and offer an "improved battery life".

While Pei didn't reveal the name of the device, the rumours and leaks have so far confirmed it as the OnePlus 6T. Similarly, he didn't elaborate what the "new technology" will be, though the previous reports have suggested that the new model will come with an in-display fingerprint sensor. It is also safe to presume that there will be a larger battery pack to give more power and, of course, Dash Charge will be available to give a fast charging experience out-of-the-box. A recent render showed that the OnePlus 6T will also come with a triple rear camera setup and feature a waterdrop display notch.