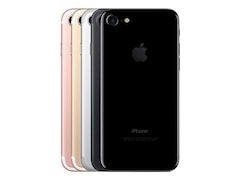 The iPhone 7 and iPhone 7 Plus launch this September represented a departure from tradition for Apple - and in many ways, a risk. Instead of the usual tick-tock cycle where each ’S’ release is followed by a brand-new design, the new iPhone models look pretty similar to their counterparts from the previous two years, and sport nearly identical dimensions.

As far as the cameras are concerned, the Apple iPhone 7 on the rear packs a 12-megapixel camera with an f/1.8 aperture. The rear camera setup has phase detection autofocus. It sports a 7-megapixel camera on the front for selfies with an f/2.2 aperture.

iPhone 7 and iPhone 7 Plus: Everything You Need to Know 02:35
Choose a variant