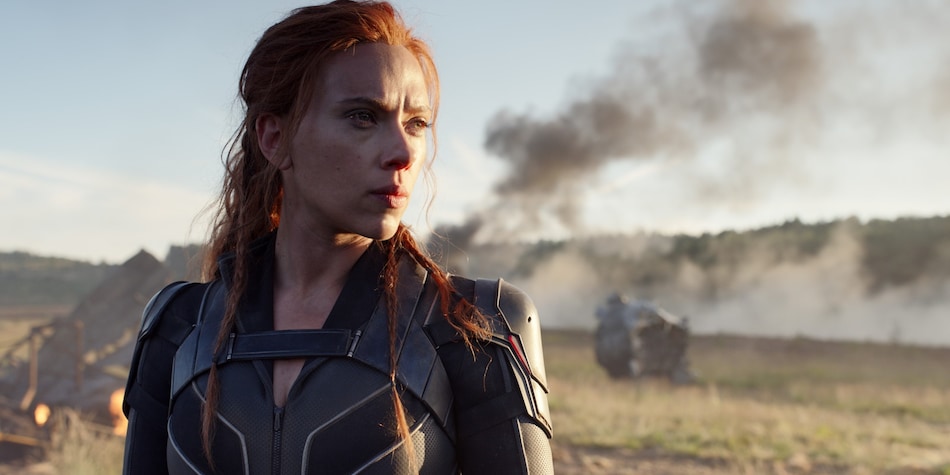 Black Widow is the obvious highlight of new movies and TV shows in July. The Scarlett Johansson-starrer is coming to theatres and streaming, but so not releasing in India on July 9, thanks to COVID-19 and Disney+ Hotstar's inability to adapt, although that's probably not going to stop enterprising Marvel fans. From India, July brings the Taapsee Pannu-led thriller Haseen Dillruba out July 2 on Netflix, Farhan Akhtar punching dudes in Toofaan available from July 16 on Prime Video, the young love Netflix anthology Feels Like Ishq on July 23, and the Jimmy Sheirgill-led thriller Collar Bomb exploding July 9 on Disney+ Hotstar. The second season of Netflix's Never Have I Ever is due a day prior on July 15. Meanwhile, Chris Pratt is headed to the future in The Tomorrow War, debuting July 2 on Prime Video.

July is also a big month for sequels, follow-ups, and sophomore runs. Everyone's favourite Ted Lasso is back for some feel-good fun; Ted Lasso season 2 begins July 23 on Apple TV+. Netflix is taking us back into the worlds of Resident Evil (games) and He-Man (the ‘80s superhero) in July. Resident Evil: Infinite Darkness cuts in July 8, while Masters of the Universe: Revelation is due July 23. LeBron James is going to play some cartoon basketball in Space Jam: A New Legacy, premiering July 16 on HBO Max (again, not in India). Guillermo del Toro's Tales of Arcadia wraps up with Trollhunters: Rise of the Titans, streaming July 21 on Netflix.

Dwayne Johnson and Emily Blunt are off on an Amazonian adventure in Disney's Jungle Cruise, releasing July 30. But, like Black Widow, Jungle Cruise isn't coming to Disney+ Hotstar in July. Shailene Woodley and Felicity Jones lead the dual-timeline romantic drama tale, The Last Letter from Your Lover, floating in July 23 on Netflix. And lastly, Keegan-Michael Key and Cecily Strong will be seen in a parody of musicals called Schmigadoon!, starting July 16 on Apple TV+.

When: July 2
Where: Netflix

A newly-wed woman (Taapsee Pannu) who loves novels about small-town murders finds herself caught in the investigation into the murder of her husband (Vikrant Massey). It doesn't help that she has a complicated past that involves a former lover (Harshvardhan Rane) and that her husband might have had suicidal tendencies. Or at least, that's what the trailer suggests. Directed by Hasee Toh Phasee's Vinil Mathew, Haseen Dillruba also stars Aditya Srivastav and Hansika Motwani.

When: July 2
Where: Amazon Prime Video

Thirty years in the future, humanity is fighting a losing battle against aliens. In a last gasp, scientists figure out a way to draft soldiers from the past, including Chris Pratt's war veteran. That's the premise for this sci-fi action movie that Amazon paid a reported $200 million (roughly Rs. 1,486 crores) to Paramount for. Yvonne Strahovski plays a soldier in the future, Betty Gilpin is Pratt's wife, J.K. Simmons is his dad, and Sam Richardson is a fellow soldier. Chris McKay (The Lego Batman Movie) directs.

When: July 7
Where: Disney+ Hotstar

Following the feature-length prequel Monsters University, Pixar — or rather, Disney Television Animation — is taking us back to the world of Monsters, Incorporated with this sequel that begins in the aftermath of Sulley (John Goodman) and Mike's (Billy Crystal) monumental shift: no more harvesting screams, only laughter. That's unfortunate for eager young Tylor Tuskmon (Ben Feldman) who graduated top of his class as a scarer. Now stuck in the Monsters, Inc. Facilities Team (MIFT), Tylor must figure out how to become funny.

When: July 8
Where: Netflix

Netflix is seemingly in love with Resident Evil. While a live-action adaptation is currently in the works with Supernatural co-showrunner Andrew Dabb and expected in 2022, Netflix has also picked up an anime series that follows Resident Evil 2 (the game) protagonists Leon S. Kennedy (Toshiyuki Morikawa/ Nick Apostolides) and Claire Redfield (Yūko Kaida/ Stephanie Panisello), during the gap between the games Resident Evil 4 and Resident Evil 5. Eiichirō Hasumi directs.

All Resident Evil: Infinite Darkness episodes will be available together at once.

When: July 9
Where: Disney+

Just over two years since Spider-Man: Far From Home, the Marvel Cinematic Universe returns to the big screen — arriving after a delay of over a year — although not exclusively to theatres, and not in India just yet. Scarlett Johansson's first (and only) standalone run as Natasha Romanoff / Black Widow will also be available on Disney+ with Premier Access in select markets, for an additional fee of $30 or equivalent on top of your monthly Disney+ subscription. A release date has not been set for Indian cinemas because COVID-19, but it's expected October 8 on Disney+ Hotstar.

As for the movie itself, Black Widow is set following the events of Captain America: Civil War, with Natasha taking a trip back home to see her family of sorts: Florence Pugh as sister-figure Yelena Belova, David Harbour as father-figure Alexei Shostakov, and Rachel Weisz as mother-figure Melina Vostokoff. Like Natasha, Yelena and Melina were also trained at the KGB Red Room in the art of Black Widow. Pugh will even take over from Johansson in the MCU, what with Natasha having died in Avengers: Endgame.

When: July 9
Where: Disney+ Hotstar

When: July 12
Where: Disney+ Hotstar

Enlightened co-creator Mike White is off to Hawaii with this social satire miniseries that skewers rich white folks at an exclusive resort, alongside the idyllic locale and the hotel's cheerful employees that turn out to be “far less perfect than first appearances would suggest.” Murray Barlett, Connie Britton, Jennifer Coolidge, Alexandra Daddario, Fred Hechinger, Jake Lacy, Brittany O'Grady, Natasha Rothwell, Sydney Sweeney, and Steve Zahn form the ensemble cast. One new episode will air every week.

Never Have I Ever

When: July 15
Where: Netflix

The six-episode musical parody comes from Despicable Me writers Cinco Paul and Ken Daurio, with Paul also providing the music and lyrics. Barry Sonnenfeld (Men in Black) directs. Saturday Night Live's Lorne Michaels, Paul, and Sonnenfeld are executive producers, while Strong is among the producers. Two episodes on premiere, with one new episode weekly thereafter.

LeBron James takes over from Michael Jordan in this new take on the same formula: sucked into the Looney Tunes world, the basketball star must team up with Bugs Bunny and the lot to defeat some supercharged opponents. There's a digital spin on the whole thing, with Don Cheadle (Marvel's War Machine) playing a rogue AI who traps LeBron. That (conveniently) allows Warner Bros. to showcase its other properties, including Wonder Woman, King Kong, The Matrix, Mad Max, and even Casablanca.

Available on HBO Max and in cinemas at the same time, for a month. No word on an India release date for Space Jam: A New Legacy, courtesy COVID-19.

When: July 16
Where: Amazon Prime Video

Trollhunters: Rise of the Titans

When: July 21
Where: Netflix

It has all led to this. Following the six-season-long events of Trollhunters, 3Below, and Wizards, the Guillermo del Toro-created fantasy series culminates in a movie. As the supernatural worlds converge, the heroes of Arcadia from all previous series must come together on the brink of an apocalyptic battle for the control of magic, up against ancient titans summoned by the evil Arcane Order.

When: July 21
Where: Disney+ Hotstar

There was no way Disney could get Tom Hanks to return for this series follow-up to his so-so amazing 1989 movie, which is why his character has been killed off. That death plays into the plot as it follows his US Marshall son Scott Turner Jr. (Josh Peck) who also ends up inheriting an unruly dog — just like his father (some coincidence!) — that becomes his partner. Lyndsy Fonseca, Carra Patterson, Vanessa Lengies, Anthony Ruivivar, Brandon Jay McLaren, and Jeremy Maguire co-star.

Burn Notice creator Matt Nix is at the helm of the new Turner & Hooch. The 12-episode first season will air new episodes weekly on Wednesdays.

The Last Letter from Your Lover

After coming across a trove of secret love letters from 1965 in present day, an ambitious reporter (Felicity Jones) sets out to solve the mystery of the forbidden affair — involving a socialite and a wealthy industrialist's wife (Shailene Woodley/ Diana Kent) and a financial journalist (Callum Turner/ Ben Cross) — as a love story of her own unfolds with an earnest and endearing archivist (Nabhaan Rizwan).

Augustine Frizzell (Never Goin' Back) directs what is an adaptation of Jojo Moyes' 2012 romance novel.

Masters of the Universe: Revelation

By the Power of Grayskull! Over thirty years since He-Man made his TV debut, the character and his universe are being resurrected for a direct sequel that picks up where we left off. As such, it's aimed at its original now-adult audience, though visually, it's still the same. Of course, the voice cast is all new. It includes Chris Wood, Mark Hamill, Sarah Michelle Gellar, Liam Cunningham, Lena Headey, Diedrich Bader, Alicia Silverstone, Stephen Root, Griffin Newman, and Susan Eisenberg.

Apple's biggest hit returns for its second season that finds the titular football coach (Jason Sudeikis) and his club AFC Richmond now in the lower leagues, following a relegation from Premier League at the end of the first season. The Ted Lasso season 2 trailer suggests a trip to FA Cup, and a visit by the coach's destructive side “Led Tasso”. Hannah Waddingham, Jeremy Swift, Brett Goldstein, Brendan Hunt, Nick Mohammed, and Juno Temple will all return — as do Ted's famous biscuits. They will be joined by Sarah Niles as a sports psychologist.

Not satisfied with one multi-billion-dollar franchise based on a roller coaster ride — that's Pirates of the Caribbean — Disney is now at it again. Dwayne Johnson and Emily Blunt set off to find a magical healing object in the dense Amazon jungles, where they have to fight off wild animals and some Nazis. Wait, so this is Disney's Indiana Jones? That's even funnier when you realise Disney owns Indiana Jones as well, thanks to its purchase of Star Wars studio Lucasfilm in 2012.

Édgar Ramírez, Jack Whitehall, Jesse Plemons, and Paul Giamatti also star. Jaume Collet-Serra (Non-Stop) directs. As with Black Widow, Jungle Cruise is available on Disney+ with Premier Access for an additional fee of $30 or equivalent, on top of your monthly Disney+ subscription.